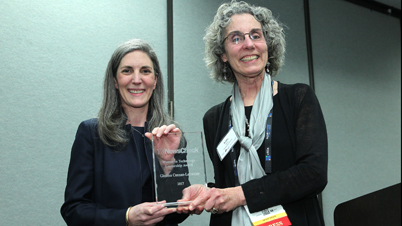 At a ceremony during the NAB Show in Las Vegas Tuesday evening, TVNewsCheck honored two women with special technology awards.

Connan-Lostanlen has played a leading role in helping Imagine Communications navigate the transition from a manufacturer of traditional broadcast technology to a provider of IP-enabled, software-defined, cloud-based solutions. At the same time, she has emerged as an advocate and educator, helping customers to make the leap into trying new technology while embracing new business models in a changing television ecosystem.

Connan-Lostanlen obtained a European Ph.D. in signal processing and telecommunications with honors from France’s Rennes University 1 in collaboration with University College London and the Institute of Oceanography of Hamburg, Germany. In June 2015, she received an MBA from the University of Toronto Rotman School of Management, dean’s list with distinction and Bregman Scholar.

Prior to her Ph.D. studies, Connan-Lostanlen earned a Master of Science in microwave and opto-electronics with distinction from University College London, U.K., and a master’s degree in electrical engineering with honors from the National Institute for Applied Sciences of Rennes, France.

TVN’s Women in Technology Leadership Award recognizes women who have contributed substantially toward advancing their industry technologically. It supports the National Association of Broadcasters Education Foundation’s Technology Apprenticeship Program, which places young engineers, who are women or people of color, in broadcast industry internships.

Thomas graduated with a degree in television technologies and electronic media engineering from the University of Applied Science Wiesbaden (HSRM), Germany, in October 2010. She received a prominent award of the ARD/ZDF Media Academy for her diploma thesis in September 2011 at the IFA in Berlin.

Following these studies, she started, at the beginning of 2011, to work at the European Broadcasting Union in Geneva in the Technology & Innovation Department as project manager. She was responsible for projects and strategic programs on 3D and future television technologies, such as UHDTV and LED studio lighting, and standardization activities within SMPTE, ITU, DVB and MPEG.

TVNewsCheck’s Technology Women to Watch Award turns a spotlight on women who show significant promise of advancing their industry technologically. It supports the National Association of Broadcasters Education Foundation’s Technology Apprenticeship Program, which places young engineers, who are women or people of color, in broadcast industry internships.