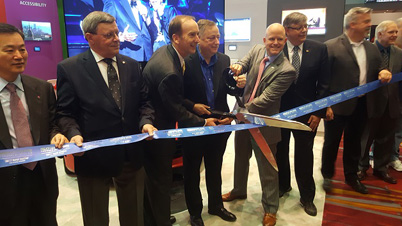 At an 8:15 a.m. ribbon-cutting ceremony yesterday at the NAB Show, ATSC board members officially opened the NextGen TV Hub powered by ATSC 3.0 to show the entire television industry that the future of TV has arrived. Above: Mark Richer, ATSC president (center); NAB EVP-CTO Sam Matheny (right); Brian Markwalter, SVP, research and standards at CTA; flanked by ATSC board members officially open the hub.

Even before NAB president and CEO Gordon Smith officially opened the 2017 NAB Show yesterday morning, Advanced Television Systems Committee board members were in the Grand Lobby of the Las Vegas Convention Center for a ribbon cutting ceremony christening the NextGen TV Hub powered by ATSC 3.0.

“Look at where we are at the NAB Show. We are the hub in the middle of everything,” said Sam Matheny, EVP and CTO of NAB, in remarks before the ribbon cutting. “We have relocated this booth to the Grand Lobby and that speaks to where we are and what we are trying to accomplish with the standard as well.”

Calling it “a great, great day,” Matheny said ATSC 3.0 is about much more than beautiful pictures, but also encompasses many other enhancements, such as addressable advertising and immersive audio, which are highlighted in the hub.

Perhaps the most visible is mobile television made possible by ATSC 3.0. A shiny red Ferrari convertible equipped with an ATSC 3.0 receiver drives home the point that the next-gen standard is about far more than home reception.

Robust ATSC 3.0 transmission to receivers on the road will open up an entirely new set of opportunities to television broadcasters.

However, that’s not to minimize the importance of delivering beautiful 4K pictures to the home. The hub makes that point by receiving a 4K WNET production of a Tony Bennett and Lady Gaga concert transmitted from Black Mountain on the outskirts of Las Vegas.

“This year, we are going to see 50% growth in UHD TVs; we will be selling something like 15.6 million UHD TVs,” said Brian Markwalter, SVP, research and standards at the Consumer Technology Association, during his remarks before the ribbon cutting.

“Our companies are introducing High Dynamic Range and wide color [gamut], and all these capabilities consumers are coming to expect are going to be brought to you by ATSC 3.0.”

Before consumers can begin receiving ATSC 3.0, however, the FCC must authorize broadcasters to begin transmitting it.

Matheny noted that NAB, CTA and ATSC joined forces in petitioning the commission for authorization. “When we work together we can accomplish great things,” said Matheny. “And that’s what you are going to see here today and throughout this show.”

Mark Richer, ATSC president, kicked off the remarks before the ribbon cutting by describing the hub as “an executive summary of what is possible with ATSC 3.0.” Remarkably absent from the hub is the traditional engineering orientation taken at many NAB Show booths — a strategy that should appeal to the thousands of NAB Show attendees who come to the show from management and executive positions.

While Richer said he lives and breathes ATSC 3.0, even he was amazed to see all of permutations of the next-gen TV standard on display at the hub. He noted that “we are just putting the finishing touches on the 3.0 suite of standards.”

The NextGen TV Hub and the work South Korean television broadcasters are making at the moment to put ATSC 3.0 on air around the peninsula makes the point that there’s more to next-gen TV than simply a suite of standards, he said.

“We’ve gone from writing a standard to reinventing the industry,” Richer said.