Next week’s CES in Las Vegas will once again take over the Strip with a sprawling, frenetic glimpse into tomorrow’s consumer technology. This time, NextGen TV will make its show floor debut, and hopes are high consumers will notice.
By Michael Depp | January 2, 2020 | 6:01 a.m. ET.

The New Year’s champagne has barely gone flat before the tech world shifts into CES, the consumer electronics mega-conference that has grown, hydra-like, to encompass media, telecommunications, automotive, health care and just about any other industry that that grazes against technology in consumer devices.

To any broadcaster attending this cacophonous tumble of conferences, exhibition floors and suite meetings, it can be challenging to tease out the industry’s more important narrative strands. But CES 2020, which runs from Jan. 7 to 10 in Las Vegas, can be distilled into some key areas through which broadcasters can elbow their way.

“For broadcasters, the starting point for seeing things geographically is going to be Central Hall because the bigger brands that are doing TVs and entertainment devices are there,” says Brian Markwalter, SVP of research and standards at the Consumer Technology Association (CTA), which presents CES. “That is the best way to understand where TV manufacturers are going.”

The technology formerly known as ATSC 3.0 makes its exhibition floor debut in 2020 in the Las Vegas Convention Center’s Central Hall (C 11329), ground zero for all the major TV set manufacturers at the show. Having lurked at the show’s periphery for years, this marks a pivotal moment for the newly rebranded NextGen TV, says Madeleine Noland, president of ATSC.

“NextGen TV is going to have its coming-out party from the point of view of commercial deployment at this CES show,” Noland says, noting it’s crucial to “make sure everybody recognizes the growing ecosystem of both consumer products as well as vendor products supporting the launch, and broadcaster services that are coming out.”

Noland says the NextGen TV booth will have products on display as well as “major broadcasters displaying some of the services they expect to launch in 2020.”

Details, however, remained elusive in the weeks running up to the show. Only LG has come forward so far with a NextGen-ready product, and Anne Schelle, managing partner of the Pearl TV consortium, is keeping her cards close to the vest as to other manufacturers in the wings.

“We really are under lock and key,” Schelle says of other potential product announcements. “But the good news is that the TV manufacturers are moving forward simultaneously, and these are TVs that will bear the NextGen TV logo and meet the requirements that CTA and broadcasters have set out.”

Schelle says attendees can expect a string of announcements from the show, including the release of feedback from the early service consumer labs and an update on progress being made in the transition to enable TV stations supporting the new services in the top 40 markets.

As to which markets are rolling out next and when, Schelle says: “We will be announcing some specific market information for some markets that are moving earlier in the year.”

For Sam Matheny, EVP and CTO of NAB, just the presence of the show floor booth itself and the many players demonstrating within it is a marker of how far NextGen TV has come. “A lot of work has been put in by both the consumer electronics companies and certainly broadcasters to develop this new standard,” he says.

“What is at stake this year is really coming out and saying NextGen TV is real in the U.S. and around the world,” Matheny adds. “Stations are coming on the air and launching, and consumer products are hitting the shelves.”

Noland says an equally important message that the booth sends is “the collaboration that has taken place between ATSC, NAB and CTA” on everything from the standard’s development to defining services in the marketplace to logo development and the lobbying work being done on Capitol Hill.

Del Parks, SVP and CTO of Sinclair Broadcast Group, echoes the sentiment. Sinclair, one of NextGen TV’s most vested players via its ONE Media Group, will be among the broadcasters on hand at the booth.

“The message from Sinclair is that we are cooperating with a lot of the broadcasters and we do have plans to start rolling out our markets,” Parks says.

That cooperation between broadcasters is necessary to create spectrum for 3.0, which has made for a much more complex rollout than the HD transition, he says. “The good news is it’s happening now,” Parks says. “It’s unprecedented, really, in the industry.”

Dave Burke, SVP and CTO for Gray Television, says NextGen TV’s biggest challenge at CES is simply consumer awareness. “A lot of people don’t quite understand what ‘over the air’ even means, and so what does it mean when you’re going to 3.0?” he says. “The consumer awareness of what 3.0 can do and that adoption kind of feeds itself in to the manufacturing side, which then helps with better adoption of the consumer electronics.”

But not everyone is optimistic that NextGen TV will even register with most attendees.

“My suspicion is that streaming services will dramatically overwhelm any ATSC conversations at all,” says Shelly Palmer, CEO of The Palmer Group, a technology consultancy that also leads private tours of the show floor. “I understand why broadcasters want it … but you don’t hear a buzz around it. That is really the industry talking to itself.”

For CTA’s Markwalter, streaming and NextGen TV aren’t necessarily competitive technologies. “Streaming is still on a big growth curve, but it’s not like a zero-sum game,” he says. “People are watching on more and more devices at more times.”

Attendees can judge for themselves. In addition to the booth, NextGen TV will be the subject of a main stage event in the LVCC’s Grand Lobby on Jan. 8 at 10 a.m. as well as a panel, “What NextGenTV Means For Tech,” featuring Noland, Matheny, Schelle and Dan Schinasi, director of product planning, consumer electronics, Samsung, at the Venetian at 9 a.m. on Jan. 9.

ATSC will also be offering a printed guide to all things NextGen TV at the booth so attendees can find examples of the technology elsewhere on the show floor. 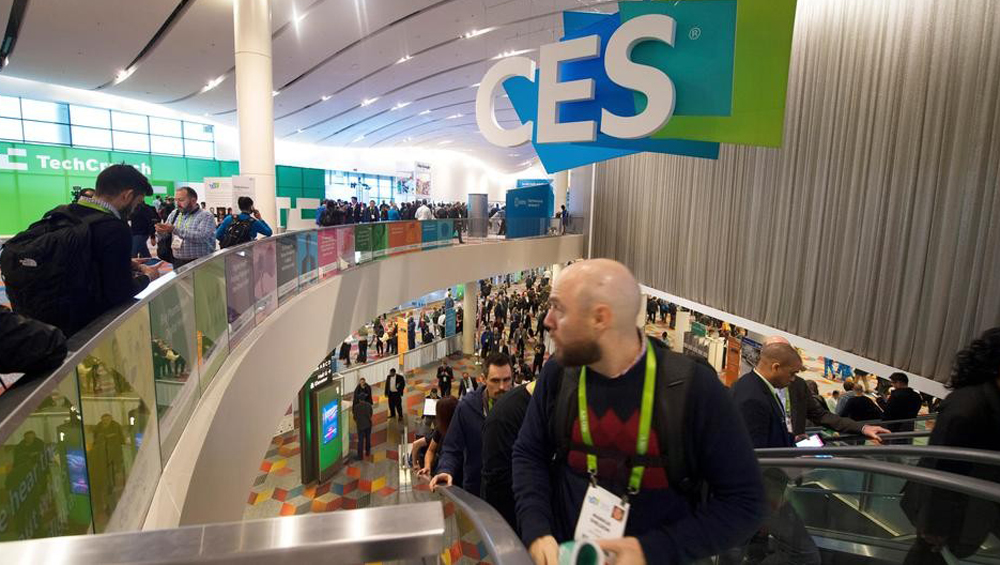 Other Technologies, Other Narratives

Early arrivals to CES may want to check out the CES 2020 Trends to Watch session at LVCC’s North Hall N257 on Jan. 6 at 9 a.m. as a primer to the show. Steve Koenig, CTA’s VP of research, leads the talk.

Throughout Central Hall, 8K sets from the major manufacturers are likely to capture some of the biggest exclamations from attendees. Also tantalizing will be the promises of 5G again on evidence throughout CES, even if the infrastructure necessary to realize it is still half a trillion dollars away from reality.

Still, for a glimpse of what that reality may look like, the session “Prediction: How 5G Will Change Your Life” with Qualcomm President Cristiano Amon on Jan. 8 at 10:30 a.m. at the Venetian is probably worth dropping into.

CES isn’t likely to disappoint on two other related fronts of at least peripheral interest to broadcasters: voice and the internet of things (IoT). The ubiquity of the former has made voice command table stakes for new devices, while connectivity has wended its way into every imaginable appliance and user interface. 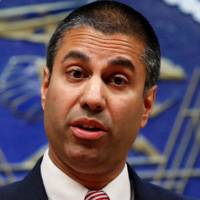 Broadcasters looking for any clues on the regulatory front will want to drop in to a fireside chat with FCC Chairman Ajit Pai and FTC Chairman Joseph Simons on Jan. 7 at 11:30 a.m. in LVCC’s North Hall moderated by CTA’s President and CEO Gary Shapiro.

As broadcasters watch their digital operations continue to grow, checking in with the chief privacy officer roundtable on Jan. 7 at 1 p.m. in LVCC’s North Hall may also be prudent. The talk features privacy officers from Facebook, Apple and Procter & Gamble, as well as FTC Commissioner Rebecca Slaughter.

Wrapping up other potentially interesting presentations, a keynote session with Samsung’s Hyun-Suk Kim, president and CEO of the consumer electronics division, may yield an interesting picture of new gadgetry on the horizon. It’s happening Jan. 6 at 6:30 p.m. in the Venetian’s Palazzo Ballroom.

Meg Whitman and Jeffrey Katzenberg will be on hand to discuss Quibi, their much-chattered about new mobile entertainment platform (that has also been beset by pre-launch, high-profile departures) in a keynote on Jan. 8 at 9:30 a.m. at the Park MGM Park Theater.

And various NBC talents including Terry Crews, Mandy Moore and Today West Coast anchor Natalie Morales will discuss “If TV Was Invented Today: NBCUniversal Reimagines the Future of Entertainment” on Jan. 8 at 4 p.m. at the Park MGM Park Theater.

While NAB will fan some of its technologists across the show floor to scope out potential opportunities and threats among the emerging technologies, the organization will also be getting some business done. It hosts a standards development organization meeting during CES as well as a television technology committee meeting, Matheny says.

It’s easy to get caught up in the details of new products and trends at CES on any given year, but consultant Palmer says the far more intriguing currents at the show run beneath its surface.

For broadcasters, the most relevant among them is how the biggest TV manufacturers will continue to approach their multi-screen competition in a world where the living room is losing its home entertainment centricity.

“The sociology around the behavior called ‘watching television’ is the most interesting of the changing behaviors now,” Palmer says. “Whose hardware is going to make that possible and empower those sociological changes?”

Palmer, who hosts his own Series Summit at CES, is emphatic that to go to CES simply on a hunt for new gadgets is to have entirely the wrong mind set. “You are going there to incrementally innovate in exponential times with tools that human beings are using to change the planet, and that doesn’t happen with a new gizmo,” he says.

What does make it happen, he says, is a lot of people gathering together to understand the application of commoditized, narrow-focused machine learning to make the world better and easier to navigate.

“That is a pretty positive place to be for a couple of days.”