Coronavirus-necessitated remote workflows have spun up quickly and reliably to allow TV stations to keep broadcasting during the pandemic. There’s reason to believe they’ll stick around after the crisis subsides. Above: Avid Edit On Demand provides a full virtual production environment in the cloud, including Media Composer software and Avid NEXIS storage. (Source: Avid)
By Jennifer Pallanich | April 30, 2020 | 10:34 a.m. ET.

Remote setups in response to stay-at-home orders and social distancing have quickly become the new normal.

Those home studio setups have evolved in the last six weeks as broadcasters fine-tuned remote production workflows, created new ways to use existing technology and tools and upgraded equipment.

As could be expected, bonded cellular is playing its part in transmitting content, and broadcasters are relying on file compression services to move big video files. Broadcasters are also increasingly embracing the cloud and cloud-based applications. Some believe once the current pandemic crisis is over, many of the new workflows will remain in place and that more work will be done remotely. 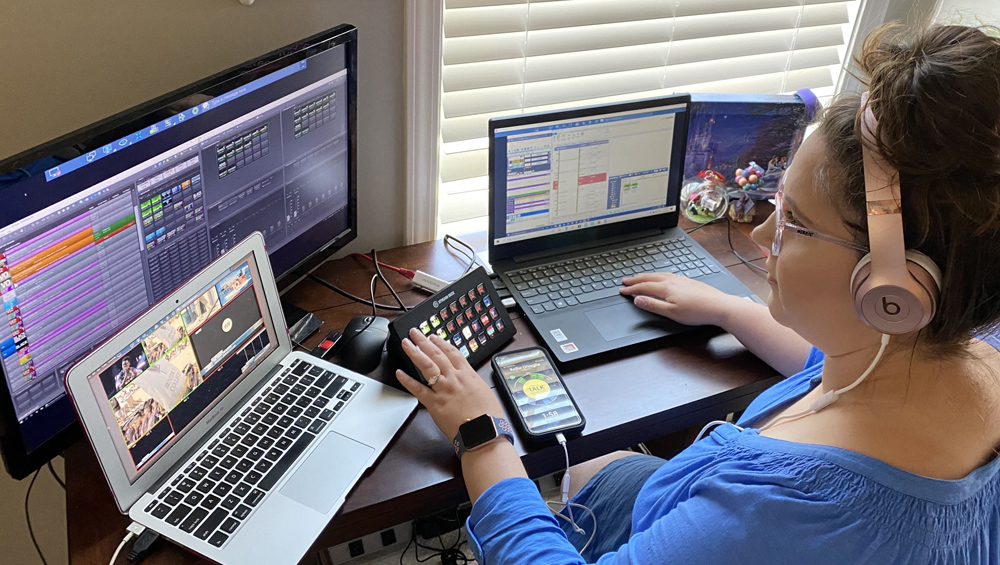 Kellie DiVeglia with Gray Television’s WIS Columbia, S.C., directs a live newscast from home. In this setup, all elements of Gray’s Technical Media Producer, a fully-automated workflow, are accessible remotely, including all production and master control functions. (Source: Gray)

For the last decade, Gray Television has been rolling out its fully-automated Technical Media Producer production and operations workflow. Mike Fass, VP for broadcast operations at Gray Television, calls TMP an enabler for stations to quickly set-up secondary on-air control points, both within the stations and remotely.

The TMP workflow put Gray’s stations into a position where they can access and operate the core systems remotely.

“We’ve seen the benefits of this workflow,” Fass says. “Accessing these systems remotely isn’t anything new, we’re just doing it in a greater capacity at this point.”

For NBCU employees, editing or producing from home was tough until the organization started using remote desktop, which allows employees to access the resources of the facility remotely, says Keith Barbaria, VP technology for NBC Boston properties.

With remote desktop, employees only need a basic computer and a solid internet connection, he adds. “That’s given us the biggest flexibility.”

Nate Isenor, NBCU’s director of field operations for stations in Boston, says NBCU largely expanded on the practices of field crews and correspondents. “They’re used to the remote environment,” he says.

Even so, it was a scramble to get new workflows into place, according to Barbaria. “When you take the workflows you do in the facility and you move them out of the facility, it has a snowball effect,” he says. “It affects everybody.”

At the same time, Barbaria says the group has “had to reimagine” how to use technology in different ways, which has led to a number of one-off solutions. One, he says, is using conference call technology not just for conducting interviews but to provide video back to the field.

Tegna’s KHOU Houston flooded during Hurricane Harvey in 2017 and was produced remotely for a year before the new facilities were operational. Working through that gave Tegna a lot of experience with remote operations, says Robert Lydick, Tegna’s VP of station operations.

“We were able to give that playbook to our other stations,” Lydick says. The basics of that playbook are having good communications, low latency and certain critical pieces of technology, he says.

Tegna had to plan and equip staff for remote operations at all of its stations. 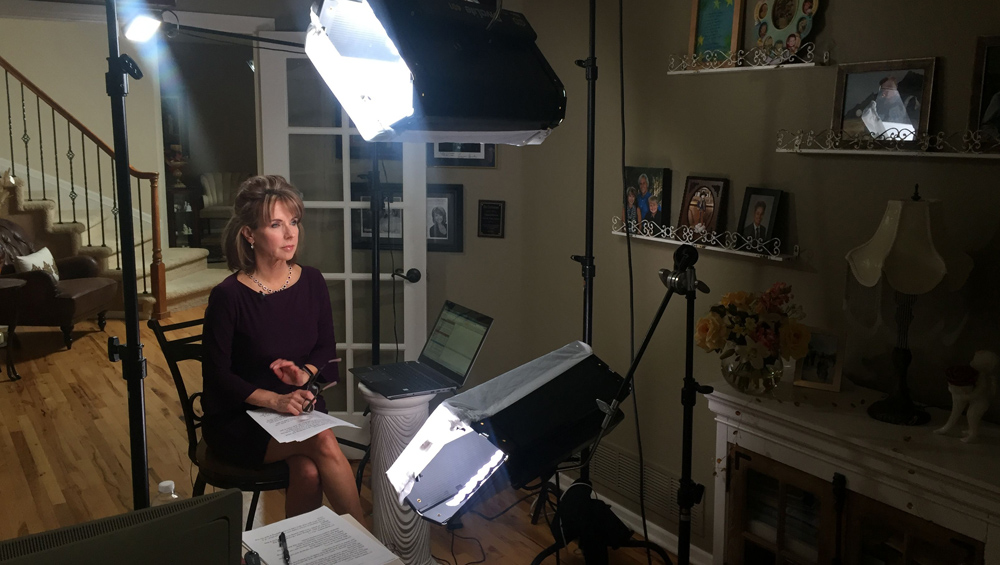 “We sent out 300 laptops to people across the company,” Lydick says. “There were computer delays, camera delays. The sources of equipment have been constrained.”

Even so, since the crisis began, there’s been a shift from equipment employees “needed to have” to equipment that would be “nice to have” like a better monitor, which shows “just how far we’ve come,” he says.

A ‘Whirlwind’ For Fox News

Fox News, which launched its first home studio about a decade ago with Mark Fuhrman in Idaho, had built out about 30 home studios between then and the start of coronavirus stay home orders.

“Since then, a whirlwind has gone on,” says Ben Ramos, VP of field operations and emerging technology at Fox News.

Fox now has about 60 home studios, he says. “We kind of threw the kitchen sink at this one. Everybody needed to be at home.”

And the variety of equipment in use reflects that. Some have broadcast-quality cameras and some are using iPhones with tripods, lights and mics from a chain store.

But, he notes, Fox had the opportunity to experiment with robotics with its earlier home sets, which helped the organization with setting up some of the recent home studios.

“The best part about the remote robotic studio is there’s nobody in the room. We’re controlling it from our headquarters or third-party NOC,” Ramos says.

But the home environment presents specific challenges when it comes to sending broadcast content back to the station, such as internet connectivity. Often, home internet connections aren’t robust enough to handle the demands of broadcast-related activities. As a result, many broadcasters have turned to bonded cellular.

As Ramos puts it, bonded cellular is carrying the day for many of Fox’s anchors.

While bonded cellular technology has helped transmit live video feed back to the station’s studio, it can also be used to send video, audio and information to the person in the home studio, says Claudia Barbiero, VP of marketing and strategic live productions at LiveU. This equipment can be controlled remotely, she adds.

LiveU has a bonding app for smartphones that’s “super easy” to use. While the app has previously been used for breaking news by someone in the community without a professional camera, she says, the app makes it possible to click a link from the studio to gain access to certain production settings so the phone’s camera takes good quality video. Usage on that app is up about 150%, she says.

As Yvonne Monterroso, director for product management at Dejero, puts it, normal internet connections can “flicker.” But broadcasters want “reliability that their internet is not going to do a little hiccup,” she says.

“It’s almost a station in a kit,” Monterroso says.

Part of making the most of connectivity is compressing file sizes. Latakoo compresses files, but also makes it possible to modify the file while it’s being transferred.

“We’ve had enormous uptick in traffic,” says Jade Kurian, Latakoo president and co-founder. “There has been an extraordinary amount of news coverage and demand, and our customer base is changing the way they work. They can’t drive the story into the station to edit it, they can’t collaborate within the newsroom.” 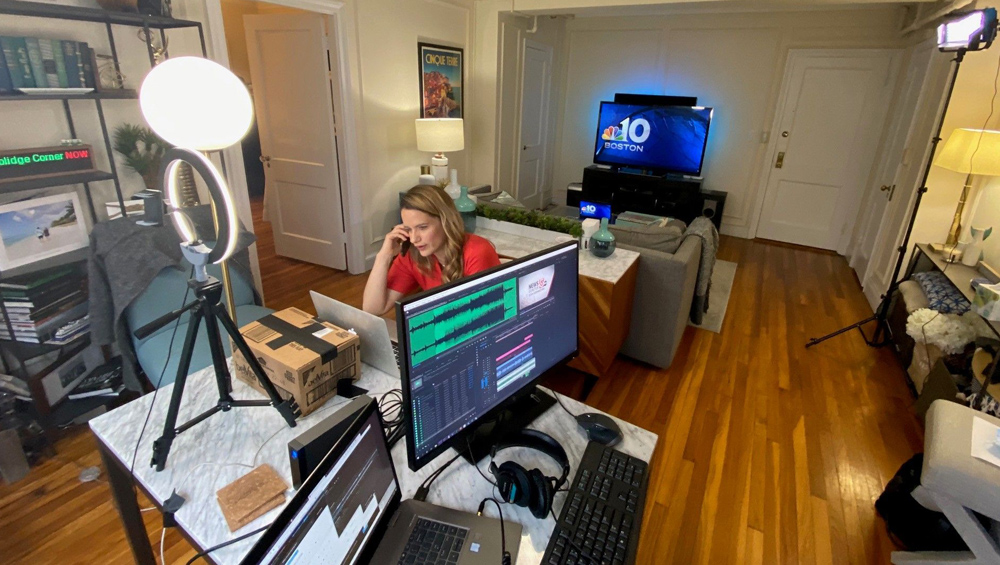 Instead, she says, entire shows are being produced completely remotely, using Latakoo to send the file from the field to the cloud. The upshot, she says, is multiple people can collaborate on the file.

Jeff Moore, EVP at Ross Video, says remote production technology is being applied more generally by clients, some of whom hadn’t done much remote production in the past. Whether the expectation is for the remote work to be temporary or long-term will determine how the remote solution looks, he says.

If it’s temporary, such as in the midst of the pandemic to keep workers safe, “we generally counsel them to make as few changes as possible to the systems themselves” by implementing technology that will carry the client through the short term. Such technology might include Remote Desktop to remotely control computer-based equipment like XPression Graphics or OverDrive Automation.

But if the client expects remote production to be a long-term or permanent situation, the “solution will be probably much different,” Moore says. In that case, he notes, it’s likely that station would need to contract with the internet service provider in the area for a dedicated connection to ensure reliable bandwidth.

TVU Networks CEO Paul Shen says broadcasters are increasingly turning to cloud and IP-based technologies to find the tools they need to meet remote production challenges. One of the reasons is cloud-based operations merely require a login, whereas many studios rely on equipment and hardware.

“Most of the television stations don’t even have the ability to move the equipment in or out,” Shen says.

For example, if a station relies on a playout system, it’s still possible to control playout via the cloud. TVU Producer, Shen says, has a playout functionality.

“We never intended to develop a full-blown playout system,” Shen says. But with some rapid integration and development efforts, he says, TVU made it possible for some of its customers to use TVU Producer to do complete half-hour newscasts in the cloud.

Ray Thompson, Avid’s director of marketing solutions for broadcast and media, says COVID-19 will usher in the true cloud era for video production.

The last six weeks or so have altered the way broadcasters are thinking about migrating to the cloud.

And one of Avid’s newer offerings — Edit On Demand — is a turnkey editing solution in the cloud. Avid had rolled out Edit On Demand in a “controlled fashion” during IBC last year and had about 20 early adopters at different phases of deployment with the tool.

“After COVID-19, that went up from 20 or so to hundreds,” Thompson says. Avid took advantage of the partnership with Microsoft to scale and ramp up Edit On Demand fast, he says. 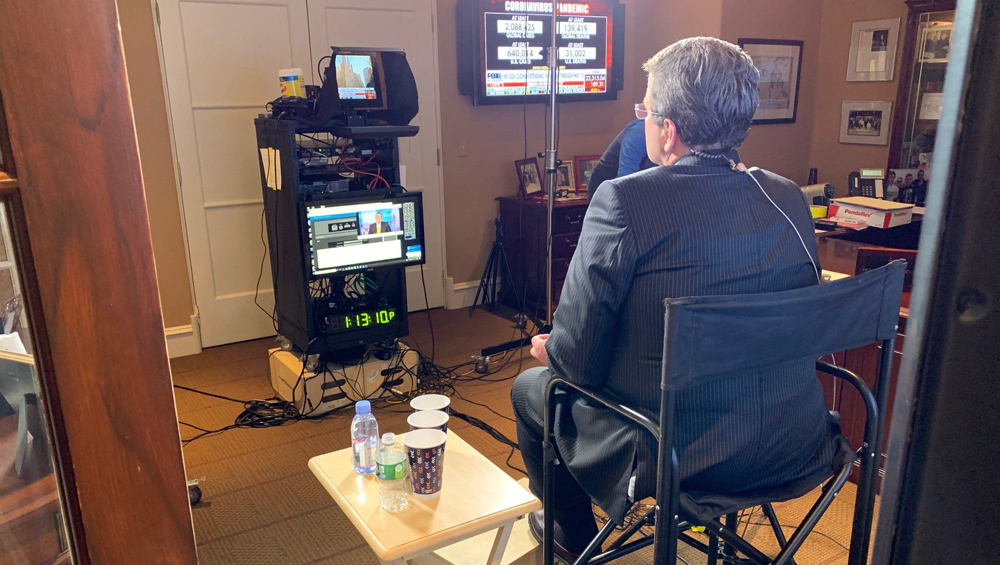 Neil Cavuto anchors Your World with Neil Cavuto on Fox News Channel as well as Cavuto Coast to Coast on Fox Business Network. His remote-controlled home studio setup includes a broadcast-quality Sony PTZ camera, DMX lighting, prompter glass in front of the lens, confidence return just below the lens and a 70-inch monitor background. Everything is controlled from Rob Melick Productions/Always-On Network Operations Center in Allentown, Pa. According to Fox News, the organization has always had technicians on site for anchor home studios, but these systems have prompted a “re-think” about that SOP. (Source: Fox News)

Chris Merrill, Grass Valley’s director of product marketing, says some customers were ready to work from home because their workflows were already cloud-based.

When “everybody had to work from home, they said, ‘We don’t care.’ They just kept going. They were ready to do that,” Merrill says.

Mostly, he says, they were doing remote production from a sports venue, but the same model is applicable to a person’s house.

Traditional broadcast engineers had “a lot of reasons” live production in the cloud “was never going to work,” he says. Chief among them, he adds, was latency.

He believes some of the requirements they held vendors to will be less important than getting content to consumers.

“I think a lot of the barriers that were there are going to be crossed,” Joyce says. “I’m seeing a lot more acceptance of digital, and people trying things.”