We are about a week or so away from Disney unveiling the names of top 21st Century Fox executives who would be joining the company following the acquisition of key Fox assets. Disney-ABC TV Group Ben Sherwood is not expected to continue in the combined company.

Walt Disney Co. has discussed reorganizing its news operations under the leadership of Ben Sherwood, its most senior television executive and the former head of its news division, according to people familiar with the matter. Sherwood, who currently runs ABC, Freeform and Disney Channel, would become the head of worldwide news and nonfiction content at the company under one scenario that’s been discussed, said the people, who asked not to be identified because the talks are private.

The new initiative will offer the network’s affiliates pre-negotiated agreements for digital distribution of their live, linear feeds as well as potential opportunities for local VOD distribution. First on board are Hearst’s 14 ABC affils.

Campbell To Oversee Daytime For ABC 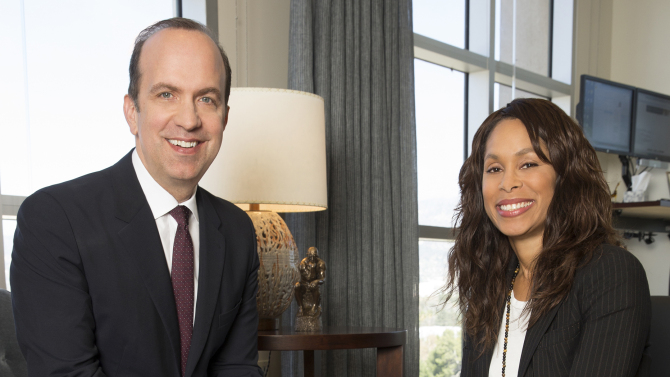 Channing Dungey, who took the reins of ABC Entertainment this week, has a few challenges ahead — primarily reversing the ratings slide of the network, which is ranked fourth in the key adults 18-49 demo. Her appointment is also a historic one, marking the first time an African-American has led programming at a major broadcast network. Here, Dungey and her boss Ben Sherwood, president of Disney/ABC TV Group, discuss the reason for the change, their strategy for the future and what making history means to them.

Following his meandering, joyous — or seriously Machiavellian — path to the top at ABC. A purely Zen gloss on his rise, however, misses how thoroughly intentional Sherwood has been all along the way. “Anybody who gets to that position and has the kind of success Ben has doesn’t do it through happenstance,” says Andrew Morse, a veteran ABC producer and Sherwood admirer who is now one of Jeff Zucker’s deputies at CNN. “You have a plan, and you plot your moves.”

At a conference in London, outgoing Disney honcho Anne Sweeney discusses the “creative transformation” rather than “creative destruction” of television and comments on the company’s acquisition of Maker Studios.

Ben Sherwood has the kind of resume that could make even a high achiever jealous. A Harvard graduate and a Rhodes scholar, Sherwood has been a reporter, producer, author and executive. On Monday, Sherwood added the title chairman to his curriculum vitae when Walt Disney Co.  elevated him from president of ABC News to co-chairman of Disney Media Networks and president of the Disney/ABC Television Group.

Ben Sherwood talks about his immediate plans for ABC and ABC News, what he learned from his college friend Jeff Zucker, a contract standoff with GMA anchor Josh Elliott and which shows he’d poach from other networks.

Top Disney Media Job May Be Split In Two

Rumors are swirling that ABC News boss Ben Sherwood could be in for some additional responsibilities as a reward for pulling off the once unthinkable — ABC’s Good Morning America toppling the Today show to jump into the No. 1 slot for mornings.

“I’d be surprised … as long as Bob Iger is the CEO of Disney,” says Hearst Television CEO David Barrett, whose group owns 13 ABC affiliates and may be ABC’s most important affiliate group. Barrett and ABC News President Ben Sherwood offered their thoughts on the future of TV news at the University of North Carolina’s Wade Hargrove Communications Law and Policy Colloquium

Sherwood: Couric To Be ‘All Over The Place’

ABC News isn’t giving Katie Couric much time to relax before her syndicated talk show starts later this year. Ben Sherwood, the president of the network’s news division, told reporters Monday that viewers will see a lot of Couric before the September launch of her daytime chat fest.

ABC News President Ben Sherwood said his goal is to make ABC News one of the world’s premier providers of nonfiction content. While that doesn’t mean producing cheesy reality shows, Sherwood said his journalists need to have a more entrepreneurial eye about how they present information.

After the embarrassment of giving Casey Anthony a huge payday, ABC News has quietly decided to get out of the business of paying news subjects in connection with exclusive interviews.

Four months into the top job at ABC News Ben Sherwood is building his executive team, and he’s tapped two former colleagues for leadership roles. Barbara Fedida is making a return to ABC News as SVP of talent and business; Susan Mercandetti is also returning to ABC, after a run as executive editor at Random House; and AOL exec Joe Ruffalo becomes SVP of ABC News Digital.

Ben Sherwood, the new president of ABC News,  said Monday that the door remains open to some form of future partnership with the cable news outlet, Bloomberg News.

‘This Week’ Team Fears A Move To NYC

An insider says a top priority for new ABC President Ben Sherwood is to decide whether Christiane Amanpour’s Sunday morning public-affairs show — historically based in the nation’s capital, where the top political journalists, pundits and lawmakers reside — will relocate to the Big Apple.

An anonymously produced and circulated video about Ben Sherwood, the new head of ABC News, juxtaposes clips of his first speech to his new employees with a series of accusations against the former Good Morning America executive producer and author of several bestselling books.

The former Good Morning America producer is tapped to succeed David Westin as head of all news operations.