The cancellation of March Madness because of the coronavirus pandemic has dealt a costly blow to college sports programs, the National Collegiate Athletic Association indicated on Thursday. The NCAA said that financial distributions to Division I member institutions at the end of the 2019-20 academic year would be $225 million — just 37.5% of the expected $600 million amount.

CBS Sports Will Pay All March Madness Technicians And Utilities, Including Freelancers

The fallout from Thursday’s coronavirus-driven cancellation of the NCAA Division 1 Men’s Tournament will be over $1 billion in ad revenue for CBS and Turner Sports. “There’s no bad guy here,” said one expert, but remedies will almost certainly have to be created.

There will be no madness this March after the NCAA on Thursday said the college tournament was canceled amid the coronavirus outbreak. The news came shortly after the AAC, SEC and Big Ten, Big 12 and Pac-12 Tournaments were canceled.

NCAA Games To Be Played Without Fans

The NCAA’s men’s basketball tournament, one of the nation’s most-watched TV sporting events, will be played this year in mostly empty arenas out of concerns for the widening coronavirus pandemic.

The top executives overseeing CBS Sports’ and Turner Sports’ annual telecast of the NCAA’s March Madness men’s basketball college championship said today that they were continuing to prepare for the event as if it would not be affected by the spread of coronavirus, though both were ready to shift plans if the NCAA decided doing so would be necessary, potentially resulting in games that are broadcast without audiences in attendance.

Nothing but net as advertisers snatch up the last of the tourney’s ad inventory a full month before tipoff.

March Madness continued to be a full-court moneymaker with CBS and Turner Sports generating $655.1 million in ad revenue during the NCAA Men’s College Basketball Tournament, according to new data from Standard Media Index.

March Madness Streaming On The Rise

Among all sporting events, the March Madness NCAA basketball tournament may be the most tailor-made for streaming video. According to CBS and Turner Sports, which have TV rights to the games and operate the streaming offerings, March Madness Live is setting new records for streams and streaming hours so far, with both categories up by more than 25% compared to last year.

Local TV stations ramp up the coverage of March Madness to share the excitement, the drama and the human interest stories beyond the scores. “That’s really all people are talking about, especially in March,” said Russ Poteet, news director for KLBK in Lubbock, Texas, home of Texas Tech.

March Madness: Use It If You Dare

The National Collegiate Athletic Association is very serious about taking action against anyone who may try to trade off the goodwill in its March Madness marks — even if the NCAA’s actual marks are not used.

Trademarks And March Madness Once Again

With the NCAA Basketball Tournament about to begin, broadcasters, publishers and other businesses need to be wary about potential claims arising from their use terms and logos associated with the tournament, including March Madness®, The Big Dance®, Final Four® or Elite Eight,® each of which is a federally registered trademark.

Shhh! How To Stream March Madness When The Boss Isn’t Around

NEW YORK (AP) — March Madness begins Tuesday. And that may mean strategizing to sneak in some games when the boss isn’t looking. Fortunately for you — though not your boss — all 67 games in the NCAA men’s college basketball tournament will be available online. Many of the games, including the Final Four, will […]

The 2017 NCAA Men’s Basketball Tournament has brought in slightly more in national TV advertising dollars through the early rounds leading up to the Final Four this weekend. So far, it has pulled in $748.6 million for CBS, TBS, TNT and truTV, according to iSpot.tv — up 2% versus a year ago. There have been some 224 brands with 514 spots, airing 8,168 times.

Turner Networks will stream select games from the final rounds of the NCAA Men’s Basketball Tournament in 360-degree virtual reality on Oculus-powered Samsung Gear VR headsets. Those with the necessary Samsung hardware and the NCAA March Madness Live VR app will be able to view games from the tournament’s Sweet 16 and Elite 8 rounds, as well as the Final Four National Semifinals and the National Championship. They can choose to pay $2.99 a game or $7.99 for a package of six.

Other big events have taken hits in 2017. But the NCAA men’s tourney is off to its best start in more than two decades. Credit close games on Sunday in part.

There’s nothing wrong with obsessing over the Big Dance. But maybe don’t stream games at work, the Defense Department tells employees, warning the department’s network could be overwhelmed.

Games on CBS and Turner Sports will feature breathtaking finishes and surprising winners as the field is culled to 32 teams over the next 48 hours. Get your bracket ready.

The tournament generated a record $1.24 billion in national ads in 2016, up 5% and a new record. Meanwhile, audiences for the final rounds have shrunk since moving to cable.

Two months ago, broadcasters were warned about the risks of publishing ads or engaging in promotional activities that refer to the Super Bowl without approval of the NFL. Now, with the NCAA Basketball Tournament about to begin, broadcasters, publishers and other businesses need to be equally wary about potential claims arising from their use terms and logos associated with the tournament, including March Madness,® The Big Dance,® Final Four® or Elite Eight®, each of which is a federally registered trademark. And the NCAA aggressively polices the use of its trademarks.

New research from Kantar Media shows that the NCAA Division 1 Men’s Basketball tournament is now second only to the NFL playoffs as the most lucrative post-season playoff franchise.

When the new NCAA March Madness Live app goes live today, it will be available on more platforms than ever before. But only Apple TV users will get a coveted feature: the ability to watch two games at once.

The finals will air on cable for the first time, two years after the Final Four migrated. Buyers worry about ratings declines. Pricing is flat to last season.

The annual March Madness college basketball tournament is giving advertisers multiple shots at their desired audience. Car companies advertising during the NCAA basketball tournament’s Sweet 16 and Elite 8 rounds, for instance, received an average “brand lift” of 59.7%, according to a survey from video ad firm Extreme Reach, which polled about 200,000 respondents on how likely they were to purchase a particular brand’s automobile.

The Kentucky men’s college basketball team nearly lost a game for the first time this season on Saturday night, which made TBS a big winner. The Wildcats’ final-seconds win over Notre Dame to secure a spot in the Final Four became the highest-rated college basketball game in history on cable and the most-watched program ever on TBS, according to Nielsen. The contest averaged an 8.4 household rating on TBS, peaking with an 11.1 from 10:45 p.m. to 11 p.m.

March Madness is drawing record numbers, both on TV and online. The NCAA men’s basketball tournament posted its highest-rated opening Saturday ever, and overall ratings are the highest they’ve ever been to this point in the tourney. Saturday’s games averaged a 7.4 household rating, according to Nielsen metered-market ratings, airing on CBS, TBS, TNT and truTV.

How To Watch All Of The March Madness

It’s that time of the year again. The time when Internet speeds begin to slow and productivity dips. Yup, it’s March Madness time. Millions of people will tune in online and over-the-air to watch the best college basketball teams in the nation go head-to-head. There’s a total of 67 games, which will be broadcast across CBS, TNT, TBS and TruTV starting today. The championship game is scheduled for Monday, April 6, on CBS. Here’s how you can tune in on your devices:

A Stronger Year For March Madness

Ad revenue is up and viewership should be as well, with Kentucky aiming to become the first undefeated champion in decades. Either way, Turner and CBS win.

We are in March, which means that the minds of many turn to basketball, specifically “March Madness” as the NCAA hosts its annual championship tournament to crown college basketball’s national champion. And many broadcasters want to take advantage of the tournament to promote their stations or the products of their sponsors. Because of this inclination, we post this warning each year — so be careful about using “March Madness” in promotions and advertisements, as these uses could bring trouble.

Thursday night’s top two shows — Scandal and Grey’s Anatomy — lead ABC to win the ratings race. Ratings for CBS’s March Madness coverage were down by more than 30% from last year.

A Kantar Media study shows that broadcasters make more money in national ad sales during the college basketball tournament than any other professional sport’s post-season games. Last year’s tournament totaled $1.15 billion of ad spending from 65 games, which trumped the 11-game NFL playoff total by over $50 million and the NBA post-season by $223 million.

The blog NewscastStudio.com is currently hosting the second round of its “Set Madness” tournament that lets readers decide which set has the best design. 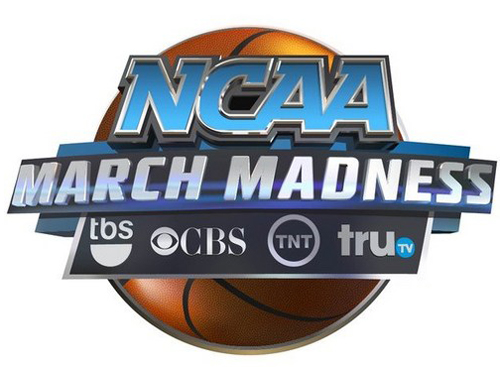 March Madness is off to a historic start. On Sunday a 15 seed, Florida Gulf Coast, made it to the Sweet Sixteen for the first time in tournament history. And last Thursday, CBS and the Turner networks drew the tourney’s best opening-day viewership in 22 years. The first night of second-round coverage, the most recent numbers available from Nielsen, averaged 8.1 million total viewers, the best start since 1991, when the tourney expanded to four telecast windows.