Many weeks into its remote production, news magazine Inside Edition straddles the need to maintain a certain level of polish and the stripped-down necessities of the moment. Host Deborah Norville, for one, would like to see some of the show’s more minimalist new features stick around.
By Michael Depp | May 8, 2020 | 5:30 a.m. ET.

In early March, Deborah Norville was celebrating 25 years hosting syndicated news magazine Inside Edition. Less than two weeks later, she was hosting a pandemic wartime version of the show from her kitchen.

Norville was one of the first broadcasters to bring remote production into her home during the earliest days of COVID-19 lockdown. Back then, such domestic glimpses were still a novelty.

Almost two months later, the novelty may have worn off with some viewers, but Norville has become attached to some of the changes it has wrought.

“It’s like the acoustic version of Inside Edition,” Norville says. “I think the stripped-down version is very real.”

Things have evolved since the show’s first remotely-produced episodes. Norville tried shooting from an outside studio at first, but didn’t like its generic, antiseptic feel and switched over to her living room. There, she does her on-camera segments in front of a large screen TV with an Inside Edition visual running on AirPlay. She shoots her segments with her own JVC HD camera, tripod and light kit, using a rented LiveU unit to transmit her video.

“There is a basket turned over with a couple of bath towels on top of it that holds up one of the lights,” Norville says. “I have to move the chairs around the kitchen table to put the camera in, then I move them back so we can have dinner. It’s that kind of a thing.”

It’s important to have visual continuity with the show’s pre-pandemic, studio version, Norville says, but it’s the differences now that are more impactful to her. “You don’t have graphics over my shoulders,” she says. “You don’t have the music that we had every time you turned around in the break and out of the break.” 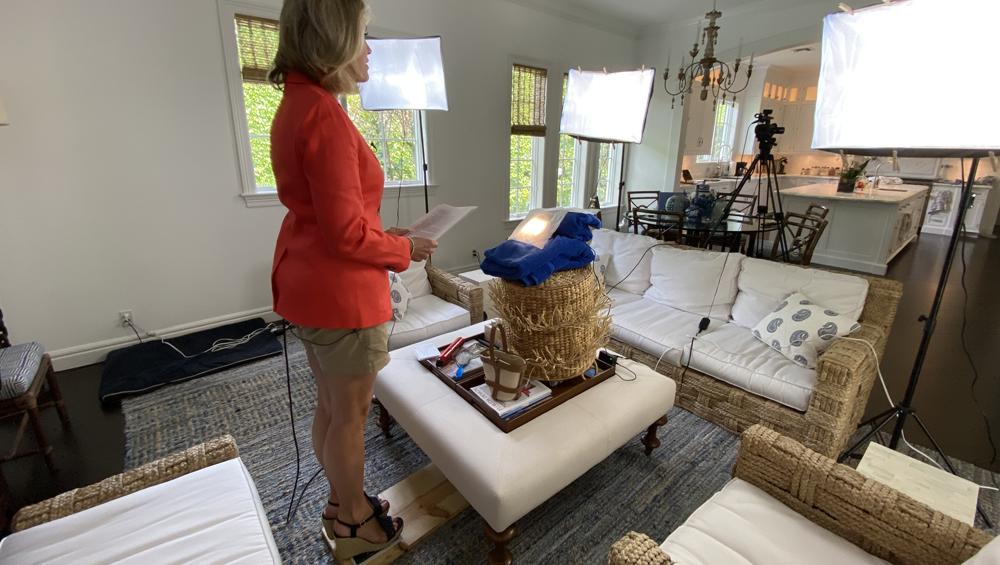 All of which has lent the production an immediacy that Norville is seeing have an effect even within her own household. “I have been on this show for 25 years, and my family has never gathered together on the sofa to watch until now,” she says, “and it’s not because we are sitting on the sofa where the camera was a few hours before.”

As with almost every syndicated show still in production, the process is now more arduous.

“In the days before this crisis, the producers worked very closely with the editors in the edit bay, supervising all the shots and the edits,” says Charles Lachman, the show’s longtime executive producer. “Now they are each working remotely from their homes, so a lot of this [is done] on FaceTime and other platforms, but it’s not the same. It doesn’t give you the immediacy of putting together a polished piece.”

Norville says the inherent disjuncture of remote working complicates the process. “We are working differently,” she says. “We have to be very deliberate about story selection and story execution, whereas before even when we were on the air, things could be shuffled around. We don’t have that luxury anymore, so decisions have to be made much earlier in the process.”

Maintaining Inside Edition’s polish is a priority for Lachman, who exudes the feeling of an old-school, high-veneer showrunner who doesn’t want to take his product in too deconstructed a direction.

“The viewers at home are not supposed to see how difficult the process is to do every day and the sweat that goes into it,” he says. “We are the only ones who have to experience that.”

But viewers and the show’s makers alike are both living in the same COVID-infused reality now. That’s informing not just Inside Edition’s look, but also what it’s covering. “The idea of mixing it up and doing a variety of stories is gone, at least for the time being,” Lachman says. “Now every story that we talk about is in some fashion connected to COVID-19.”

He says the show has tapped a deeper well of the kind of inspirational stories that were always in its mix. “People are not watching the show just for news content,” Lachman says. “They are all watching to be inspired by the good deeds that are happening all over the country. People really do have that hunger for hope in these very bleak times.”

Along the way, they’re getting a little closer to Norville and the show’s correspondents in more personal moments. One was Norville’s quest to get an accurate test for the virus after she received a positive result from a questionable test. Another came in the field when correspondent Ann Mercogliano was interviewing a source whose husband was a first responder. Mercogliano, whose own husband is in law enforcement, found herself in tears with her interview subject.

“It was a very real and very raw moment that stands out to me,” Norville says. “It just underscored we are all in this together.”

She says that moment — and the kind of stories that prompted it happening every day — may have a more permanent impact on Inside Edition’s editorial direction.

“I don’t know that we will do a lot of goofy stories about plastic surgery and people who do bizarre things to their bodies,” Norville says. “I just don’t think anybody is going to care even if they cared in the past. It sure seems like a dumb way to spend a viewer’s time going forward.”

For now, Inside Edition can sustain its pandemic posture indefinitely, Lachman says, but he’s longing to get the show back into its studio element. “I can’t wait to get back into the studio and into our regular facilities,” he says. “I can’t wait to get all the bells and whistles going like we used to. That would be a very happy day for all of us here.”

Well, maybe not entirely for Norville. She’s grown on the show not being so “gussied up.” Paring it down “draws more attention to the content, and the content has been so important,” she says.

“I am sure when we are on the other side bells and whistles will return, but it seems appropriate for the kind of subject matter we are doing.”