As FCC Commissioner Michael O’Rielly sees it, Justice has been hostile to, say, combinations of top four TV stations in markets because it continues to hold that TV stations compete only with each other. “That’s completely wrong,” he said. “Everybody is in the same market and the big tech companies are trying to steal everybody’s lunch. We have to recognize that.”
By Harry A. Jessell | March 21, 2019 | 7:23 a.m. ET. 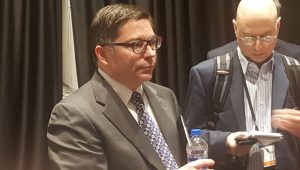 FCC Commissioner Michael O’Rielly doubled down on his criticism of the Justice Department’s antitrust overseers, saying the basis for their heightened scrutiny of broadcast mergers “stinks.”

O’Rielly appeared at the American Communications Association yesterday a couple of hours after the head of the Justice antitrust division, Makan Delrahim, did and said that differences between how Justice and the FCC see mergers are based on differences in their statutory obligations and priorities.

Aware of Delrahim’s remarks, O’Rielly said that he understands that Justice operates under a different statue. But he has “different standards as well and that’s what’s problematic: His standards stink.”

As O’Rielly sees it, Justice has been hostile to, say, combinations of top four TV stations in markets because it continues to hold that TV stations compete only with each other.

“That’s completely wrong,” O’Rielly said. “Everybody is in the same market and the big tech companies are trying to steal everybody’s lunch. We have to recognize that.”

The FCC is working hard to modernize its rules by taking a broader view of the media marketplace in which each medium competes with every other medium for viewers, listeners and advertising dollars, he said.

Ignoring the FCC, he said, Justice is telling parties that it will it will not change. “I think that is just wrong. We have an obligation as a government to modernize our rules.”

O’Rielly said that his criticism is aimed at getting Justice to change. “If they can justify what they are doing in these narrow silos — which I don’t think they can — then so be it. But I think if you look and say what is the current media marketplace, it’s much broader than that little marketplace [DOJ sees].

O’Rielly has gone after DOJ on at least two other occasions. At the NAB Leadership Conference last month, he said: ““Would DOJ carelessly reject any proposed combination of the third and fourth largest stations in a small market? Really? How could it be that DOJ leadership would allow such a strict policy, notwithstanding the facts in an application? Such an approach befuddles me. It can’t be that DOJ staff is running amok with little supervision, right?”

O’Rielly’s suggestions that the DOJ’s thinking on the broadcast marketplace has calcified may be overstated. Delrahim has been promising a workshop to examine how it handles broadcast mergers for several months and yesterday he finally set the dates for the workshop — May 2-3, although he didn’t have an agenda or any names of speakers.

I think that WXIN/WTTV should be grandfather in just my opinion in the Nexstar & Tribune merger there are enough voices in the Indy TV market. Although it would be way cleaner if Wish TV still had CBS which Tribune was sneaky to get CBS away from Wish TV since Lin TV the then owner couldn’t do anything about it since they were going to be no more when they merged with Media General now Nexstar. That is how I see it I hope DOJ says the same thing as Nexstar did everything right sold everything to third parties with TEGNA & Scripps.