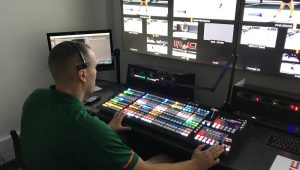 An EVS DYVI 1080p/4K production switcher in use in the University of Miami’s centralized control room.

The system is deployed through EVS’ new XHub-VIA network appliance with automatic discovery and IP addressing. One unit can support up to 18 servers and can be expanded to connect more than 30 servers on the same network.

XNet-VIA has already been adopted by Denver-based Mobile TV Group for its new “45 Flex” production truck, which is being shown off at NAB. Touted as the industry’s first end-to-end SMPTE 2110 uncompressed IP-based mobile production truck, 45 Flex uses XNet-Via to connect four EVS XT-VIA and one XS-VIA live production servers across a 10 Gbps bi-directional ethernet network.

EVS also said it is experiencing strong sales for its DYVI 1080p/4K production switcher, which is now used by 17 customers worldwide including e-sports league ESL, CBS Sports and reality show American Idol. A unique customer for DYVI is the University of Miami, which dramatically ramped up its video production capabilities for the launch of ESPN’s new ACC network by creating a centralized production control room linked via fiber to 16 venues across its campus. The school also bought other EVS gear including an XT-Series server and an XFile3 clip import and archive system.

Drew Thomas, director of production services for the University of Miami, said the school will use the DYVI switcher to produce 85 digital events and 15 to 30 linear events this year. In the process, says Thomas, it is preparing a bevy of students for future careers in sports production by training them on the widely adopted EVS replay platform.