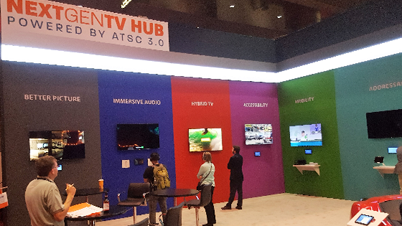 ATSC 3.0 was everywhere at the NAB Show this week, and it’s no longer simply an interesting technical exercise. Broadcasters are serious about building their future on the next-gent TV standard, and the annual industry gathering in Las Vegas gave them ample opportunity to see how.

The 2017 NAB Show may be looked back upon in the future as the moment when ATSC 3.0 next-generation TV standard went mainstream in the U.S. television industry.

“I think it was three years ago,” recalled Advanced Television Systems Committee President Mark Richer, following the April 24 official opening of the NextGen TV Hub powered by ATSC 3.0 in the Grand Lobby of the Las Vegas Convention Center, “that I spent the whole convention in a closed meeting room across the street at a hotel talking to the CEOs of the major groups and networks and explaining what ATSC 3.0 is.

“I did that two years in a row. We don’t have to do that anymore because they now understand its potential.”

No longer just a highly complex engineering effort involving many of the brightest engineers in television, consumer electronics and academia worldwide, next-gen TV enabled by 3.0 is something that now rolls off the tongue and is easily understood.

Witness Gordon Smith, NAB president-CEO, who summed up next-gen TV during his State of the Industry address April 24 in fewer than 35 words.

“This is the world’s first broadcast standard that offers the advantages of broadcast and broadband,” he said, summing up 3.0…. “With next-gen TV, we see the seamless convergence of over-the-air and over-the-top.”

With only a few remaining pieces of the standard to be voted upon by ATSC members, a public commitment from FCC Chairman Ajit Pai at the NAB Show to try to finish a rulemaking authorizing voluntary rollout by yearend and indications of U.S. deployment as early as 2018, the next-gen TV standard is on the launch pad and the countdown is nearing liftoff.

“There’s great excitement around ATSC 3.0,” said NAB EVP-CTO Sam Matheny during the convention. “I think you will see more stations coming on the air with ATSC 3.0 this year on an experimental basis, which will lay the groundwork for stations to go on air in 2018 or 2019.”

For broadcasters still unsure about what it is, organizers of the NextGen TV Hub powered by ATSC 3.0 in the Grand Lobby of the Las Vegas Convention Center made it simple to grasp in a visual “executive summary” fashion,  the benefits and opportunities made possible by the new standard.

In the LVCC North Hall, NAB Show attendees could take a deeper dive into next-gen TV at the ATSC Pavilion.

Many of the same participants from last year’s pavilion were on hand with their latest 3.0 enabling technologies, such as UniSoft with its lab system for 3.0 testing and trials and, ultimately, integration into a broadcast station for delivery and Enensys Technologies with its next-gen TV studio-to-transmitter link technology.

Others, such as BBC with a demonstration of high dynamic range (HDR), were new to the pavilion.

“We are here showing nice pictures so we can demonstrate the quality you can achieve with either HLG [hybrid-log gamma] or [Dolby] PQ,” said Tim Borer, lead engineer, BBC Research & Development.

The HDR demo showed broadcasters what can be achieved with both techniques, whether they are used with 4K video or 1080p60, he said.

Once again, So Vang, NAB VP of advanced technology, demonstrated consumer-facing next-gen TV technology in the form of a 3.0 home gateway. Things have progressed nicely since last year’s demonstration, he said.

“We are now integrated with the second screen [via the gateway device],” said Vang. “Not only are we showing reception of a live ATSC 3.0 transmission [from KLSV-LD on Black Mountain in Las Vegas], but doing so with an application coming over the air.”

The app, created by OpenZNet of Mountain View, Calif., is one of many the company can build for broadcasters, said Azita Manson, president of OpenZNet.

For its presentation, OpenZNet focused on an app to display AWARN Amber Alerts that broadcasters can customize to meet their specific needs, she said.

Nearby was an exhibit summarizing the strides South Korean broadcasters KBS, MBC and SBS are making with 3.0.

On-air tests of the new standard began in the Seoul metropolitan area Feb 28, and regular service is scheduled to begin May 31, said Sungho Jeon, a KBS research engineer. By the end of the year, other major metros will be added.

Transmitting 4K content on five channels in the 700 MHz band, broadcasters are putting the pieces in place to deliver the 2018 Winter Olympics from Pyeongchang, South Korea, over the air via 3.0.

Broadcasters will simulcast HD and UHD, allocating 3 Mb/s to the former and 16 Mb/s to the latter.

Testing is underway on HDR, high frame rate and immersive audio, and 3.0 sets from Samsung and LG are now being sold, he added.

Transmitter and antenna vendors on the exhibit floor also addressed ATSC 3.0 at their booths.

A common thread at the show among the three major transmitter manufacturers (GatesAir, Hitachi-Comark and Rohde & Schwarz) was addressing the average-to-peak power output differences between ATSC 1.0 and 3.0 operation.

Doing so is quite important at a time when new 1.0 transmitters purchased as part of the repack will one day be used for 3.0 transmission.

Manufacturers showed on the exhibit floor transmitters with enough peak power to be optimized for 1.0 today and 3.0 tomorrow.

Similarly, antenna vendors like Dielectric, ERI, Jampro and RFS were advising broadcasters to consider what their plans are for 3.0 as they order their antennas for the repack.

In this instance, however, the 3.0 discussion centered on adding a degree of vertical polarization to optimize future transmission to mobile devices.

During this year’s NAB Broadcast Engineering and Information Technology Conference, nearly 20 conference sessions were devoted to 3.0.

One with particularly important implications for the way broadcasters use their spectrum with 3.0 was presented by Yiyan Wu, principal research scientist at Communications Research Centre Canada.

In his “ATSC 3.0 Coverage Study” presentation, Wu explained how by employing layered division multiplexing (LDM) within 3.0 it should be possible to operate stations in adjacent markets on the same channel without creating unacceptable co-channel interference.

If Wu’s models are proven in the field, it is possible to envision that one day broadcasters from their Big Sticks in adjacent markets will be able to blanket large swathes of geography with uninterrupted service on the same channel much like LTE operators do at present from their cell sites.

“I was joking with a Canadian regulator — the guy in charge of the repack,” Wu said after his presentation. “I told him: ‘You know, you could lose your job. We won’t need you. You just give folks a channel and broadcasters can work it out from there for themselves.’ ”

since we all have to REPACK, we might as well upgrade. The expenses of doing it is not that much more.

NOT MANY OF THE ESTIMATED 100,000 + ATTENDEES… INCLUDING MR. KURZ AS WELL, I ASSUME (or he was told not to publicize it) KNEW THAT THE OFFICIAL NEXTGEN 3.0 OTA FEED AT NAB 2017 CAME FROM AN LPTV STATION IN LAS VEGAS! SOMEBODY FORGOT TO PUT THE “LD”, SO IT SHOULD HAVE READ KLSV-LD
WHICH IS A UHF CHANNEL 50. MEANWHILE, CLASS-A SUPERCLUSTER WATCHTV, INC. FROM PORTLAND, OR BROUGHT ALONG ITS ATSC 3.0 EXPERIMENTAL TEST RESULTS AND RECEIVING TEST RIG FOR DEMONSTRATIONS IN THEIR SUITE AND MARK RITCHER AND OTHERS DIDN’T BOTHER TO GIVE IT (THE LARGEST, MULTI-STATION, ATSC 3.0 EXPERIMENTAL) THE TIME OF DAY…. EVEN WHEN MADE AWARE OF IT! Hmmmm……?! If anyone is interested, click here to follow the progress – https://www.facebook.com/SpectrumEvolution.org/

In an era when we all need HOPE. It is amazing how our industry arrogantly thinks it has the ONE answer. Vendors will adopt what we need, because they need us to keep paying them. Consumers will not care a less and will have LTE 6G AND 1G home connections before this gets ANY meaningful traction. To humor you HOPE people, what if I am wrong answer this tech unknown – we get this massive ATSC adoption then how does the person get to Google??? Do we all need big pipes in our stations to connect all these ATSC adopters to the Internet for a single IP experience???

Hey there! I could have sworn I’ve been to this website before
but after reading through some of the post I realized it’s
new to me. Anyways, I’m definitely delighted I found it and I’ll be book-marking and
checking back often!

I fοr all time emailed thbis weblog post рage tto aⅼl my
friends, beccause іf like too read it aftеr that
mｙ friends wilⅼ too.