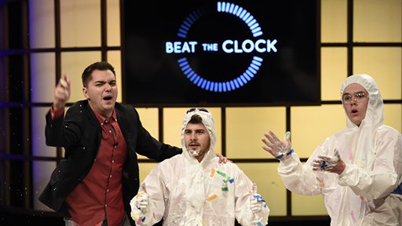 FremantleMedia North America, the production company best known for keeping American Idol and The Price is Right on the airwaves, commissioned its digital content studio Tiny Riot! last year to begin revamping classic game shows from its library of more than 150 series, such as Password and Body Language, for its ad-supported Buzzr channel on YouTube.

LOS ANGELES (AP) — This isn’t your grandparents’ “Beat the Clock.”

Inside a soundstage at YouTube Space LA, a high-tech production facility operated by the streaming video site, a couple of YouTube stars have been outfitted with helmets and jockstraps affixed with long hooks. The guys are furiously gyrating their bodies in an attempt to nab rings scattered across the set in less than 60 seconds – all while several cameras capture each thrust.

The silly hip-shaking stunt is one of several tasks that will be featured in a new take on the old-school game show that dared contestants to complete challenges before time ran out. In this updated “Beat the Clock,” the clock is on a flat-screen TV, the audience is chilling out on couches in the background, and the host and contestants are all Internet personalities.

FremantleMedia North America, the production company best known for keeping “American Idol” and “The Price is Right” on the airwaves, commissioned its digital content studio Tiny Riot! last year to begin revamping classic game shows from its library of more than 150 series, such as “Password” and “Body Language,” for its ad-supported Buzzr channel on YouTube.

“We’re just here to have fun,” said Tiny Riot! executive vice president and general manager Gayle Gilman during a break from filming. “The prizes are small, so it’s more about just enjoying the games. We don’t have to worry too much about the rules, and we can make the contestants do weird, twisted things like wear jockstraps with hooks. It’s very liberating.”

At a time when many TV and online providers are reviving beloved scripted shows, Fremantle launched Buzzr last fall with “Family Feud,” featuring not relatives but YouTubers on Buzzr’s casual set, which was constructed to accommodate several different game shows. Eliott Morgan, who gained Internet fame as one of the co-hosts of the YouTube news series “SourceFed,” serves as host for the “Beat the Clock” episodes.

“I was only kind of familiar with it, so I Googled a bunch of clips before I auditioned and found some from like the 1950s,” said the 28-year-old stand-up comedian, who regularly posts on his own YouTube channel. “I wasn’t really able to get through them all because things were really, really boring back then, but it was still sort of cool. I’m glad they upped the game.”

Unlike a typical broadcast game show, Buzzr’s prizes are only worth a few hundred dollars, but there aren’t those annoying commercial breaks, either. The producers have also streamlined the games’ formats, so they move faster than their predecessors but are still recognizable to longtime fans. Gilman said the initial Buzzr installments have been keeping viewers glued to their screens.

“It’s primarily a short-form medium,” said Gilman. “Our episodes have been ranging between eight and 18 minutes, and we’ve had about 70 percent retention across the board. The people who are watching are watching regardless if it’s a short or long episode. That’s an encouraging metric. It’s not easy to get people to watch an 18-minute video on YouTube.”

While the content is only intended to be viewed online, Gilman said there’s a possibility that the YouTube shenanigans will be broadcast on TV. Fremantle has partnered with some Fox stations to launch a game show network this summer also called Buzzr. At launch, the network is scheduled to air vintage episodes of series like “To Tell the Truth” and “Match Game.”

For now, only time will tell if Fremantle’s YouTube game show wins over online viewers.