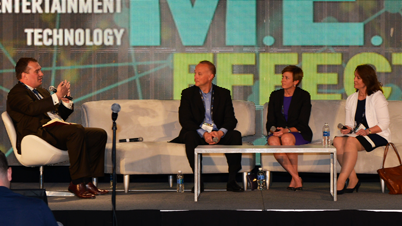 Media technology companies hoping to score sales from TV station groups in the coming years will find themselves spending time not just with engineers, but with accountants as well.

“We work hand-in-hand with our technology partners on large capex investments,” explained Mike Tuvell, SVP and chief financial officer at Tribune Media. Speaking at the NAB Show Media Technology Business Summit on Sunday, April 23, in Las Vegas, Tuvell and two other station group CFOs explained just how much they want to know about a manufacturing partner before signing on the dotted line.

At the 29 TV stations owned by NBCUniversal, the budgeting for the coming year begins in June, when engineers at each outlet begin compiling and prioritizing lists of new solutions they would like. “We review every project over $2,500 and make decisions on them,” said CFO Christine Dorfler. “There is a lot of autonomy in identifying the needs, but from a group level we try to drive efficiencies.”

The group also wants centralized expertise when it comes to support. “We have people moving around and we don’t want them to have to learn new platforms.”

Sinclair’s financial team meets quarterly with the company’s chief technology officer and chief engineers. “We look at whether we are on budget, at what new projects have come up and we ask what are the ROIs,” said Lucy Rutishauser, the group’s SVP, CFO and treasurer.

An IT Resources Committee, formed 18 months ago, reviews proposed systems upgrades or enhancements. Several Sinclair department heads sit on this committee. “We determine whether the project goes forward and does it fit with where we are going in the next five years,” Rutishauser said. “Then we decide whether to build it or buy it.”

Among the projects approved by the ITRC: an upgrade to Oracle’s Cloud ERP (enterprise resource system). “We have a lot coming down the pike with ATSC 3.0,” Rutishauser said. “We want to get to centralized order entry.” The ITRC also approved an investment in a CRM platform that is being rolled out to all the stations.

How do the CFOs and their teams vet potential technology partners? “For a new vendor it’s different,” Rutishauser said. “We will diligence the company, check references, look at financials and call other customers.

“We ask: ‘what is your access to capital? Are you generating cash to support yourself? What is your level of debt and what is your commitment to R&D and how will you pay for that?’ ”

All three CFOs were at NAB looking at new technology and all three were looking for platforms compatible with 3.0. “We have to be ready for it,” Rutishauser said.

She was in Las Vegas specifically to look at advanced advertising tech. “I want to know how the technology is moving for impression and census based data as opposed to ratings,” Rutishauser said. “We need to analyze second-by-second data. I want to know how to integrate linear, digital and OTT and how to measure that and have multiplatform delivery in an ad management platform.”

Tuvell said Tribune shares “a similar level of enthusiasm” about the new broadcasting standard. “One reason I wanted to come to NAB is to search for vendors with a leg up on ATSC 3.0,” he said. “Who’s got targeted advertising and subscription TV technology?”

Dorfler agreed: “I’m interested in 3.0 and its future capabilities.”

Asked whether 3.0 will drain too much management time and leave other technology initiatives by the wayside, Dorfler said no. “There’s no question 3.0 will be a drain on resources and management time, but we can’t let a part of our future success at being able to reach viewers across all platforms fall behind.”

While reaching viewers on newer platforms is key, monetizing them offers big challenges. Tuvell said he wished the media industry could change the supply and demand curve on the web. “Digital has a lot more supply than linear TV does,” he said. “At Tribune, we are trying to come up with premium products on the digital side. We know we need to get the CPMs up.”

The goal, he said, is “more targeted products at a premium scale.”

Dorfler agreed. “We are all on the ledge to an extent. There are things like measurement and ad agency comfort level that are tougher to address. A lot of what we can do is impact the mindset. TV needs to be treated like TV wherever it goes. We need to drive that mindset with our sales force.”

Josh Stinehour, an analyst at Devoncroft, which presented the Media Technology Business Summit at NAB, asked the CFOs how they were coping with the idea that a transition to IP would mean less capex investment and more opex payments.

“It’s pretty simple,” Tuvell said. “Cash is king and it applies in this scenario. Previous to some of these new models you would invest a large chunk of money and then amortize it out over five to seven years. Now you might spend a million a year over time in equal payments.

“We encourage our technical team to think about the requirements,” he continued. “Don’t overbuild for something that may not be required. Then put numbers on paper, and whether over time or all at once, I want to know the overall cost.”

Rutishauser agreed. “We’re measured and valued off of free cash flow per share, not earnings per share so it makes a big difference. Our feeling is that if it meets the other criteria, we can structure the contract and pricing terms so that you win and we win on that.”

To see all of TVNewsCheck’s 2017 NAB Show coverage, click here.