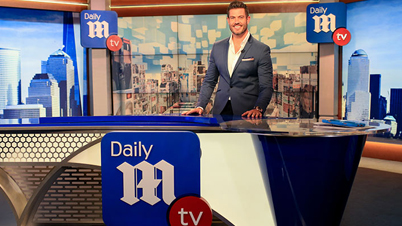 This season's No. 1 first-run freshman show will be back for another season in the fall.

DailyMail.com and Stage 29 Productions today announced that the syndicated Daily Mail TV has been renewed for a second season.

Daily Mail TV had the highest rated national debut of any syndicated newsmagazine since 2007, according to its producers. The show has grown by double digits since its opener and by Dec. 17, 2017,  had averaged more than 1.6 million daily viewers — maintaining its rookie lead for 15 weeks in a row.

Jay McGraw, CEO Stage 29 Productions said: “When we created Daily Mail TV we knew we had something special. We’re very grateful to our audience for tuning in each day and we look forward to continuing to tell the stories that matter well into the future.”

Arthur Hasson, COO, Sinclair Broadcast Group, said: “We are excited about continuing with and building upon our freshman season’s success. Not only is Daily Mail TV delivering stories our viewers are clamoring for, we are also able to use the show’s exclusive content in our regular newscasts as well. This additional content source has already paid dividends.”

Sean Compton, president of strategic programming and acquisitions, Tribune Media added: “Daily Mail TV has had a strong showing across our stations, we’re extremely pleased with the show’s performance and looking forward to the show’s next season.”