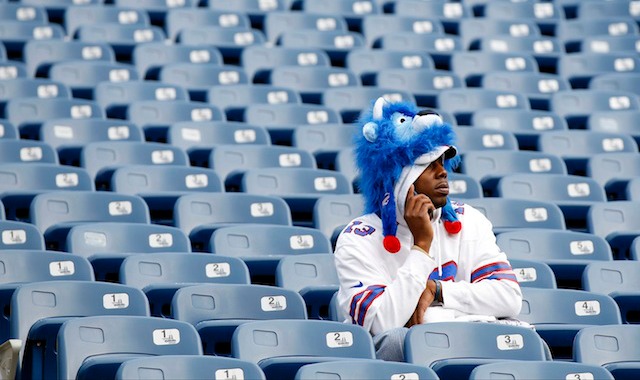 In what may have been her last move as Acting FCC chairwoman, Mignon Clyburn on Friday proposed to end the sports blackout rule, which would clear the way for NFL teams to blackout local broadcasts of their NFL games when they fail to sell out their stadiums.Tom Wheeler is expected to take over the chairmanship on Monday.

The sports blackout rules, which have been on the agency’s books for almost 40 years, clear the way for the NFL to black out local TV broadcasts of local NFL games when it appears that the local stadium won’t sell out.

“Changes in the marketplace have raised questions about whether these rules are still in the public interest, particularly at a time when high ticket prices and the economy make it difficult for many sports fans to attend games,” Clyburn said in a statement.  “Elimination of our sports blackout rules will not prevent the sports leagues, broadcasters, and cable and satellite providers from privately negotiating agreements to black out certain sports events.”

“Nevertheless, if the record in this proceeding shows that the rules are no longer justified, the commission’s involvement in this area should end,” she said.

The National Association of Broadcasters opposed her plan, contending that it would hurt local broadcasters and their viewers and be a boon to pay TV.

“The games that previously would be blacked out for everybody will be imported by cable or satellite and will only be available to pay TV viewers,” said Dennis Wharton, an NAB spokesman, in an interview. “This completely undermines localism.”

“Sports blackouts are exceedingly rare, and NAB dislikes these disruptions as much as our viewers,” Wharton also said. “However, we’re concerned that today’s proposal may hasten the migration of sports to pay-TV platforms, and will disadvantage the growing number of people who rely on free, over-the-air television as their primary source for sports. Allowing importation of sports programming on pay-TV platforms while denying that same programming to broadcast-only homes would erode the economic underpinning that sustains local broadcasting and our service to community.”

Clyburn’s announcement could be one of her last as the agency’s top commissioner because Tom Wheeler is expected to step in as chairman on Monday.

Even assuming a majority of the FCC’s commissioners approve of Clyburn’s plan, the public and industry will still have an opportunity to comment before the agency can take final action on the rule.

Let me translate this ukase from NAB’s Ministry of Propaganda: He is not worried about “localism” (which is load of garbage to begin with, unless you are talking about the hiring of Miss South Carolina to anchor the news in Columbia); he is not worried about sports migration (don’t recall such mewling from NAB when Disney moved Monday night football to ESPN awhile back; and no, he is not worried about the folks who rely exclusively on over-the air TV because these people generate no money for the cashcasters. What he is talking about is leverage over pay-TV providers in retransmission consent negotiations. With contact in the NFL approaching criminal violence, combined with poor game quality because the NFL has expanded too much and the number of “franchise” QBs is down to one (Payton Manning), millions of fans are going to walk away from this game, especially when you add in $40 parking, $9 beers, and $90 nosebleed seats. The blackout rule, in sum, is about keeping the dollars flowing to the cashcaster-NFL keiretsu. When NAB resorts to exploiting the vulnerabilities of off-air viewers to justify retention of paternalistic government, you can be sure that NAB is more concerned about cashcaster profits than anything else.

But NFL Network can put all on their current future channels (like ESPN and ESPN2 etc), charge huge fees to cable operators and keep all the ad money for itself, thus covering the massive rights fees.

Sounds like she’s getting her cable for free for life. This is absolute garbage, its already a joke that if you don’t live in the market the stadium is in you don’t get the game OTA. Nice try cable, but if stadiums want butts in the seats they can stop charging exorbitantly high amounts for their tickets, concessions and parking. Dear NFL: pay your players a few less millions, stop gouging the people, and try not to make millions in profit. Then, you’ll have the viewer base you crave.

If NFL games go only to payTV, I will no longer be able to watch any professional football and likely will lose interest in the league. This happened in baseball, which is my favorite sport by the way, when all of the games of my favorite team went cable and satellite. With no games to watch I lost most of my major league baseball interest and go to fewer games as I have lost a connection with the players. I used to get to 10+ games a year and this year only two. Major league baseball has sold out to the payTV interests. And the local team even plays in a taxpayer funded stadium. So much for the average fan.