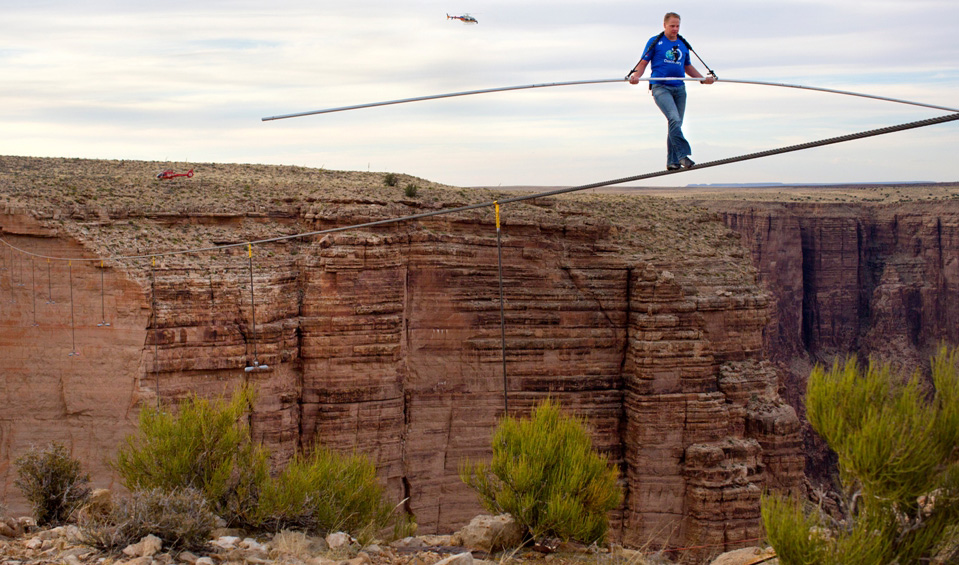 Discovery Channel is hoping the extensive production, logistics and safety preparations going into Nik Wallenda’s live walk between two buildings in Chicago next month will generate viewership similar to the tightrope walker’s two earlier televised events, including  last year's stroll across a section of the Grand Canyon —  more than 10 million.

From the standpoint of live-event television, a nighttime tightrope walk between tall buildings in the windiest city in America would seem to be tailor-made.

Discovery Channel apparently thinks so, which is why the cable channel is showcasing another live, high-wire crossing by a man who has already headlined two such specials previously, tightrope walker Nik Wallenda.

Wallenda’s next live televised walk, scheduled for Sunday evening, Nov. 2, in Chicago, could emerge as the most-watched live event on TV this fall. For this live special, the 35-year-old, self-proclaimed “King of the Tight Rope” will brave Chicago’s famous winds in an attempt to walk across high wires suspended between tall buildings situated on opposite banks of the Chicago River — the iconic Marina City Towers apartment complex on one side, and on the other, an office building, the headquarters of the Leo Burnett ad agency.

“There is an element of risk that I do think is compelling for people to watch. It harkens back to the Evel Knievel days,” admits Howard Swartz, vice president of production and development for Discovery, evoking an era — roughly the mid-1960s to 1980 — in which daredevil Knievel could be seen on TV making various long jumps on his motorcycle over multiple large objects (often cars). As often as not, Knievel’s stunts ended with him getting hurt, sometimes seriously — which became the primary reason why people tuned in to watch.

Understandably, Swartz would rather not focus on the sometimes macabre reasons why people tune in to watch a man walk a tightrope several hundred feet above the earth without the benefit of a safety harness or safety nets.

“You’d probably have to talk to Nik about the motivation for why he does it, but what he has said is that he looks for his walks to inspire people,” Swartz told TVNewsCheck.

Swartz is executive producer of this new special, dubbed Skyscraper Live with Nik Wallenda. This live-TV spectacle will require more than 200 production personnel, more than a dozen cameras, and at least five, high-powered lighting set-ups mounted on various buildings around the site. Logistical support will be provided by the city of Chicago, including street closures, an “appropriate” number of police, emergency workers and other personnel. The city’s “costs are covered by the Wallenda team,” Swartz says. The telecast will be broadcast live, but with a 10-second delay.

Swartz was also executive producer of Wallenda’s previous Discovery special — his tightrope walk across a section of the Grand Canyon — the Little Colorado River Gorge — on June 23, 2013.

That event was Discovery’s first with Wallenda, but Wallenda’s second high-profile high-wire walk on live TV. The first one was seen on ABC — a walk over Niagara Falls for a primetime special on a Friday night in June 2012 that averaged 10.3 million viewers over its two hours — 13.3 million during the final half-hour in which much of the crossing was made.

Wallenda’s Grand Canyon special on Discovery drew near-identical numbers — an average audience of 10.7 million over the whole show and more than 13 million at a point in the show when Wallenda’s walk was under way.

All told, Skyscraper Live will stretch over two hours, starting at 7 p.m. ET on Nov. 2. Peacock Productions, a unit of NBC News, will produce the event for Discovery, and the evening’s hosts and commentators are being drawn from NBC Universal entities, including Willie Geist and Natalie Morales from NBC News, and Jim Cantore from the Weather Channel.

Discovery declined to comment on how ad sales are faring so far for Skyscraper Live.

Between the wind, the darkness, the possibility of cold temperatures, and one leg of the walk that will be undertaken uphill at an angle of 15 degrees (owing to the different elevations of the two buildings), the stunt and the telecast are fraught with challenges.

“What prepares you for these is having an ability to really do your homework,” Swartz says. “We spend the better part of a year or more on most of these and we’re looking at the complexities from a production standpoint, from a logistics standpoint [and] from a safety standpoint.”

Swartz says Wallenda prepares for his walks by practicing in a facility where a tightrope is set up and environmental factors such as wind and rain are simulated. He won’t get a chance to try out the tightrope suspended between buildings in Chicago until the actual televised walk, however.

Swartz admits that overseeing such an undertaking can be heart-stopping. “When Nik was walking across the Grand Canyon last year and he knelt down because there was a sway in the wire that he wasn’t comfortable with, you know, yeah, that makes your heart beat a little faster.”