How A Local News Catch-Phrase Was Born 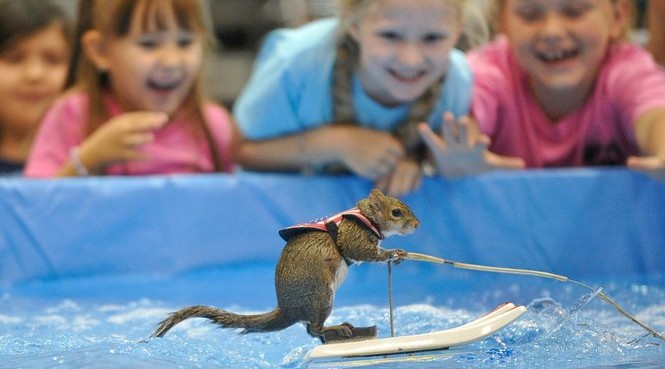 Here’s the crazy story behind an assignment editor, a news director, a reporter and Twiggy, a water-skiing squirrel.

How that phrase entered the lexicon is based on a true story. It happened in Orlando, Fla., when a gentleman named Chuck Best taught his pet squirrel how to water ski.

The Bests found an orphaned squirrel and raised it as a family pet who would ride on their shoulders even as they dipped in the pool. After Best purchased a remote controlled boat for his daughter, he played with it more than she did. When his friends teased him about it, he joked that he would teach Twiggy, his pet squirrel, how to water-ski.  And the rest, as they say, is history.

In 1978, Bill Bauman was the assignment editor at WFTV, the ABC affiliate in Orlando. Bauman went on to be news director at KCRA Sacramento, Calif., from 1987 to 1997, when he returned to Orlando as the general manger of the NBC affiliate, WESH, until 2007, when he retired.

The following is an account gleaned from a written version by Bauman as well as phone interviews with Jordan, Comings, and Lou Ann Best, who continues the tradition of Twiggy, the water-skiing squirrel, started by her husband, Chuck.

In 1978 Bob Jordan only asked one thing of his reporters, which wasn’t bad for a guy many considered to be one of the toughest television news directors in North America. In those days, we only did a half hour of news at 6 and 11 p.m., so airtime was precious.

Bob’s one thing? He gave you a beat and wanted only one story a day from that beat. But it had to be the biggest, best, most important and most interesting story of the day. And he expected his reporters to be on the air every day they worked. One story, once a day. One of the secrets to Bob’s success is the competition he fosters among his reporters to produce the best story, the one people talk about, the one producers fight over.

It was a hot day in the summer of 1978 when I was operating the assignment desk at Channel 9, WFTV. One of our best reporters, Ron Comings, was working that day. Ron understood the one great story a day rule and he always delivered. On this day Ron and his photographer Jeff Moorman were chasing another big story.

Sometime just before noon I fielded a call from a man who identified himself as Chuck Best from Sanford. He said: “I’m down on the southeast corner of Lake Monroe, and I’ve taught a squirrel how to water ski. I glued two Popsicle sticks together, mounted a little set of handle bars, put some peanut butter on them, and then attached a line to a battery powered boat. I thought you guys might like to see it.”

We were very busy and I offered a very stupid response that went something like, “smoke another one and call me back later.” We got a lot of crank calls.

Half an hour later, Ron called in a panic from Sanford. His story was not coming together for today and he was desperately trying to find another one. I said, “Why don’t you go down to the southeast corner of Lake Monroe and tell me if you see anything unusual.” I was too skeptical to tell him what he might find.

When I got there, it was outside a skating rink, and there were a bunch of people standing around watching this little remote-controlled boat pulling a squirrel go around this little pool. I remember thinking, this is wild, this is the craziest stuff I’ve ever seen.

The day got busier and I forgot about Ron. At 4:30 I noticed he wasn’t on the rundown. I tried to call him but got no response. The hour before the newscast was hectic and the newsroom was humming towards 6:00.

At 5:30 the back door of the newsroom went BANG and flew open. Ron and Jeff came sprinting in waving a three-quarter-inch videotape, and Ron was shouting, “You won’t believe this. Get Jordan.”

We crowded into a small edit room and Jeff hit the play button. Up came the most fantastic video. A tight shot of a small squirrel standing up with his hind legs on what looked like water skis, and his front paws clutched around a small stick mounted straight up from the water skis.

And he was moving across the water towards Jeff’s camera. Jeff did a slow pull back to reveal a small boat pulling the squirrel on skis. It was hard to believe, but it was a water skiing squirrel.   We just stood there for a minute watching in disbelief. Ron said, “His name is Twiggy.”

I remember thinking this is funny as hell. You just don’t see stuff like this that often. In my 40 years in the local TV news business, this was the biggest, small story I’ve ever covered.

I remember Bob Jordan saying, ‘ABC News wants this story. We’ve got to get it on a plane.’ Remember, this was back before the Internet or even satellite. Unbeknownst to me, our assistant news director at WFTV submitted my story on the water skiing squirrel to the regional Emmy competition and it won — the first regional Emmy won in that Florida chapter by an Orlando reporter.

Twiggy debuted that night on WFTV’s 6 and 11 p.m. newscasts. The next morning he made his national debut on Good Morning America, and that evening Peter Jennings put him on World News Tonight. As they say today, Twiggy went viral. Ron and Jeff won an Emmy. Twiggy and Chuck toured the country and the world doing shows at hundreds of conventions.

In November, 1997, Chuck Best drowned while rescuing his stepfather who had fallen off Best’s boat into the Wekiva River.

But Twiggy, the water-skiing squirrel lives on. Lou Ann Best, Chuck’s widow, continues to run the franchise. After Best’s drowning death, Lou Ann fitted Twiggy with a life-vest and today sees Twiggy’s mission as a lesson about water safety.

“There are eight or nine Twiggy’s now,” says Lou Ann Best. “We do about 20 appearances a year at water parks, malls, RV and boat shows around the country. Who knows how many lives Twiggy’s message about water safety has saved over the years?”

Lou Ann Best says there’s a Twiggy book and cartoon in the works. You can visit Twiggy’s web site here.

Market Share by Paul Greeley is all about marketing and promotion at TV stations and appears every Monday. Greeley has more than 20 years of experience in local TV marketing. He’s been a writer, producer, editor, creative services director and VP of marketing for a top-20 broadcast company and has experience in markets large and small. Read other Market Share columns here. If you have some ideas or stories you want to share, please let him know. You can reach Greeley at [email protected] or at 817-578-6324.