KDKA And WTXF Are All About Flexible Sets 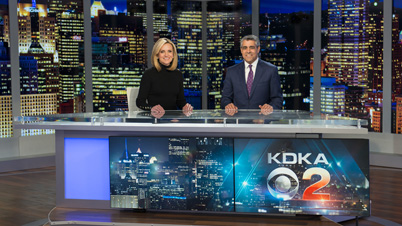 At both of these Pennsylvania stations, large studios, big video arrays, easily changed graphics packages and quick-change studio lighting make it possible to produce much more than news from their new sets without placing an excessive burden on their production staffs. This is the final part of a four-part Special Report on news sets. You can read the other parts here.

Local news-producing stations have been adding more daily news broadcasts to their schedules for years, and each time they do they face the challenge of putting a new product on the air without taking on the expense of a new set.

The same can be said of local variety and entertainment shows, studio sports programming, quiz shows and other local programming that gets added to the schedule.

For at least two Pennsylvania stations, meeting the challenge has boiled down to building in flexibility. “That is the beauty of our new set,” says Jim Driscoll, news director of WTXF, the Fox O&O in Philadelphia.

“In doing all of that different programming, we were looking for something that would allow us to give each show a different look,” he says.

KDKA Pittsburgh — Hometown Feel
While having the ability to convert its new set, which was designed by Devlin Design Group, for different shows was baked into the original design, KDKA’s main objective was to convey a hometown feeling.

“If you watch our newscast, you get the sense we are in the heart of Pittsburgh, and we are,” says Loscar.

To get started, KDKA took its large studio down to the walls, clearing everything out to maximize available space for the set.

Fourteen 90-inch flat panels were mounted as close as possible to two perpendicular studio walls to add depth to the set, Loscar says.

Orienting the monitors vertically (in portrait mode) along the walls meant the station could emulate the look of the tall windows in its newsroom that overlook the city, he says. In many instances, 4K video sources are down-resed to 1080i to fill the displays, Loscar says.

To convey the feeling that its news and other programming produced on the set is being done from a loft, the station installed a wooden floor — rather than a shiny black floor — to create a warm and intimate feeling, he says.

Besides the window-like monitors on the walls, the set displays video and graphics in monitors in the news desk as well as a 4-by-3 monitor array and large rear-projection screen used in an interview area.

A glass-enclosed weather center in a corner of the set, a green screen area and a multipurpose area with a changing color wave wall round out the setup for news, says Loscar.

To scale and direct the right video and graphics sources to the correct monitor or set of monitors, KDKA relies on a TVOne Coriomaster video wall controller.

The controller helps KDKA create interesting visual effects, such as changing the video in several of the 90-inch window-like displays as anchors walk past each to reveal new visual content as they go, Loscar says.

Tight control over the video wall, background displays and other monitors on the set also makes it easier to create new looks from the same set for other local programming, he says. But that’s only one part of the design that makes the set simple to repurpose.

“Everything that Devlin Design Group built for us is on wheels,” he says. “Depending on what show is being done, anything can be wheeled out.”

That includes the main anchor desk, weather desk, weather pod and even a couch on a platform with wheels. “We can have the studio completely empty if we want to,” he says.

Perhaps the biggest news set changeover occurs when the station wheels in bleachers on weekends to accommodate its studio audience for its high school scholar quiz show, he says. But having the ability to wheel in news set elements or pieces for other shows makes tearing down the quiz show and reconfiguring for what’s needed next a simpler task.

LED lighting also adds to the flexibility of the set. LEDs elements are positioned above the faux window displays and in slats in other set walls, says Loscar. Along with the changing colors of the LED lights in the wave wall, these lights make it fast and easy to change the look of the set.

“Having to do all of this different programming, we wanted a set that would let us give each show a different look, completely changing what the background looks like. And that’s exactly what we have achieved,” Loscar says.

For the past four or five years, the local news set at WTXF was feeling “very dated and dark,” says Jim Driscoll, VP and news director at the Fox O&O in Philadelphia.

However, that all changed Aug. 1 when the station went on air with its new, local news set designed by FX Design Group under the supervision of WTXF VP of engineering R.J. Russell.

“We wanted the flexibility and ability to give the news department as many storytelling locations and tools as possible,” he says.

To do so, Russell ran with a suggestion from Driscoll to leverage the station’s large, 50-by-100-foot studio to maximum effect.

In concrete terms that meant focusing the set design on three monitor walls: a 1-by-6 wall with 55-inch flat panels; a 3-by-6 wall with 40-inch monitors; and three 84-inch monitors on swivel mounts that can be aligned as if they form a single monitor array or used as separate monitors, he says.

Each is driven from the control room by Avid’s TD Control multidisplay controller, which takes auxiliary outputs from the station’s Sony MVS-8000 production switcher, he says.

The three monitor arrays have unleashed WTXF’s anchors from their desk, allowing them to present stories in new ways, Driscoll says. “We now have six or seven different places we can put the anchors to tell the story differently. And depending on the type of story we are doing, we give the producers the ability to move them over to the Ben, the Betsy or the Trips [the station’s nicknames for the 1-by-6 array behind the desk, the 3-by-6 monitor wall, and the three 84-inch monitors, respectively].”

Moving anchors and reporters from place to place on the set made it necessary to “light as flat as possible but still get our talent to pop,” Russell says. This lighting strategy gives the station more areas in the studio from which to shoot without requiring constant lighting changes.

Combined with RGBA backlighting that makes changing the color of the set fast and easy, the design allowed the station to do its local news and its local NFL pre-game show from the same set without viewers being the wiser, Driscoll says.

Little did he, Russell or FX Design know when set design began how important that set flexibility ultimately would be to success of the station’s programming.

WTXF was well into building its new news set when the station decided it would begin airing The Q, a locally produced entertainment and talk show hosted by Quincy Harris, in mid-September, Driscoll says.

The challenge for WTXF was finding a way to transform a set designed for local newscasts and Sunday sports specials into one that could handle the demands of producing a live, 30-minute entertainment show five days a week.

“We knew we were going in ahead of the game because of the ability to make the set look different,” Driscoll says.

But lighting changes and different graphics packages for monitors would take the station only so far. Serendipity and the ability to recognize the resources the station had at hand played a role as well.

“I remember walking into the studio with several of my news managers and taking a look at the surroundings,” Driscoll says. What struck the group was the presence of a loft off a large conference room that overlooked the studio.

“We looked at it and had a vision of pulling down from an audience up in this loft into this cavernous studio with an audience down below,” Driscoll says. “We started backwards from most shows. Instead of building from the set, we built from the audience.” That approach revealed “some really different, neat [camera] angles that never show up on the newscast,” he adds.

It was Russell who identified how Harris could make his entrance to the set every day — another stroke of luck for the station.

A door was built into the news set between two of the monitor walls. FX Design included the door in its design to break up the wall and add depth and character, says Russell. For a station tasked with producing an entertainment show, it also meant the problem of finding a way to get the host on set was solved.

Other changes for the show, included building a DJ booth into the loft for Harris’ introduction and new visual packages for the monitors, which mostly display the Philadelphia skyline. However, for one segment called “Q It Up,” Harris stands next to the three large 84-inch monitors. Two display the skyline while the third displays video or graphics of whomever or whatever he is discussing, Driscoll says.

The tech setup for the production remains mostly the same as for the newscast. However, a front-of-the-house audio console positioned in the loft has been added to provide a sound mix for the audience and shotgun mics have been positioned around the studio to pick up audience response, Russell says.

Fade To Black
While the specifics differ between KDKA and WTXF, both stations reflect a larger growing trend when it comes to local news sets: build in flexibility for the future.

At both stations, large studios, big video arrays, easily changed graphics packages and quick-change studio lighting make it possible to produce much more than news from their new sets without placing an excessive burden on their production staffs.

In the case of WTXF, a bit of good fortune added to the mix in the form of an existing loft and a door. But setting aside serendipity, which can’t be counted on, both stations have tackled the challenge of finding a way to support production of a demanding local program schedule with the right combination of creative vision, design and technology.

This is Part Four of a four-part Special Report on news sets. You can read the other parts here.