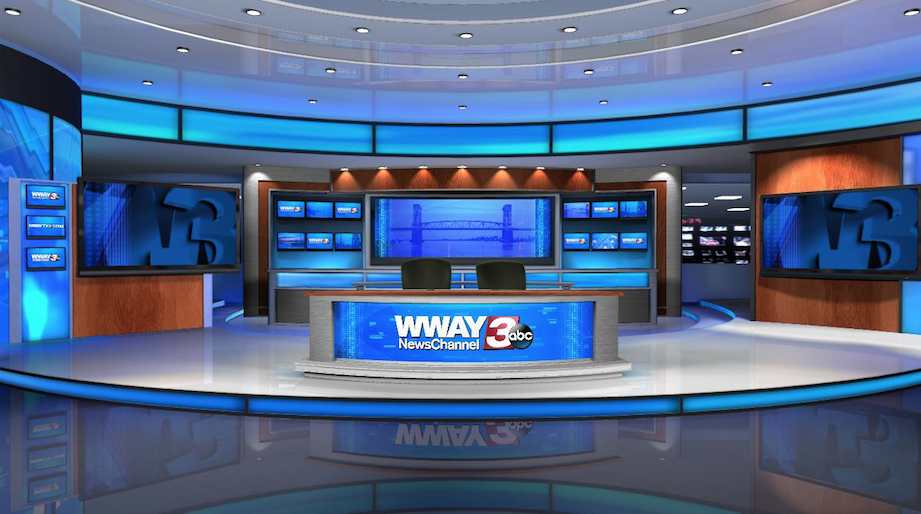 Group owner Morris Multimedia is outfitting all its stations with virtual sets, citing the economy and flixibility they offer. CEO Dean Hinson: "Each of our stations ... put out more than one signal and those second channels each have their own branding. The decision to go virtual is an economic one, and it’s one based on space. We’ve watched the prices come down on the equipment to do this and are ready to move at a rapid pace.”

Morris Multimedia, looking for a flexible and cost-effective way to keep its newscasts modern and attractive, has decided to transition all 14 of its stations across the South to virtual sets from Vizrt.

Dean Hinson, president-CEO of the broadcast group, says the decision to scrap wood, plastic and metal for pixels and green screens will not only let stations update their sets at the click of a mouse, but also produce newscasts with different looks for different channels.

“Each of our stations at Morris put out more than one signal and those second channels each have their own branding,” Hinson says. “The decision to go virtual is an economic one, and it’s one based on space. We’ve watched the prices come down on the equipment to do this and are ready to move at a rapid pace.”

WWAY Wilmington, N.C. (DMA 131), went live from its virtual set in April and is launching a 10 p.m. newscast on its recently added CW subchannel in January, which will have its own unique look. WXXV Gulfport, Miss. (DMA 160), and its MNT subchannel, went live last month, and Hinson hopes to have the rest wrapped up by the end of 2014.

A virtual set is created using dedicated software from any of a handful of vendors, including Vizrt, Orad and Ross Video, and superimposing a 3D digital image of the desired set onto green screen, similar to how traditional weather forecasts are delivered on-air today. In a completely virtual environment, not only are the background and floor of the set a green screen, but so is the furniture, allowing the anchors to rest their hands on a virtualized desk.

More advanced virtual sets include camera tracking capabilities, like the one at Gray Television’s KKTV Colorado Springs, Colo. (DMA 89), allowing a camera to pan and zoom, showing different perspectives of the virtual set, without worrying about the digital image breaking up. The station, which was featured on TVNewsCheck last week, is in the middle of a major rebuild that uses virtual sets and augmented reality graphics.

Citing costs, Morris stations opted against tracking capabilities. Instead, cameras will stay in one position and won’t be able to zoom or pan. The Vizrt software does allow for a digital zoom effect, showing a wide shot of the virtual set before focusing on the talent at the anchor desk.

In Wilmington, the transition from WWAY’s hard set to the virtual set was striking. The hard set consisted of an oval desk made of oak on red carpeting with two vertical monitors in each corner. The virtual set, accented with brushed metal on the edges of furniture and the floor, looks as if it is in a warehouse. In reality, the station uses only about 350 square feet of space.

“It looks like something you’d see in New York or Los Angeles,” says Andy Combs, GM of WWAY.

U.S. broadcasters have long complained that virtual sets do not look realistic, says David Jorba, SVP of Vizrt Americas, but such complaints are misplaced.

“Based on the technology today, designers can accomplish that hyper-realistic look to the point where it’s indistinguishable to the average viewer at home,” he says. “Europe has been doing this for a long time because they don’t try to be realistic. They like the big white spaces and that more abstract look. U.S. TV stations want something that looks realistic.”

The futuristic, digitized look isn’t necessarily a bad thing, adds Combs. “The younger generation is used to seeing this type of look. They grew up with video games — that virtual environment is familiar to them. We want to continue appealing to the younger demographic because they’ll eventually become our older demographic.”

Cost was a major factor in the decision to go virtual, Combs says.

While shopping for new playout servers, switchers and graphics at the 2012 NAB Show for WWAY’s new conventional studio, Combs came across the Vizrt booth and learned that its Viz Virtual Studio box could perform the function of all that gear for  $140,000 rather than the $160,000 he had budgeted.

The software for the virtual news set that WWAY uses today costs only $150 and was downloaded much like a user would buy a song from iTunes. The virtual set the station uses for its Friday night high school sports show cost about the same.

Come the 2014 election, Hinson says to expect a radical new look that will rival network-level sets. He declined to talk specifics of what viewers can expect.

Combs says news of the virtual set has also made its way around Wilmington, which is commonly referred to as Hollywood East because of the high number of films and commercials shot there. He says companies have already started to approach him about renting space and offering to buy the virtual environment that the station would ultimately be able to keep on its system.

“We’re actually seeing a return-on-investment from our virtual sets,” Combs says. “We’re now doing commercial production for commercials that will be running nationwide, not just local. It’s becoming a great additional source of revenue, which all stations are looking for right now.”

Billy Stratton, WWAY chief engineer, says the nightly newscasts, depending on the amount of breaking news, can be operated with just one person. The operator, using a few monitors, can switch between different shots and live feeds at the click of a mouse, and throw in graphics all from the same user interface.

“I like to think of it as a studio-in-a-box because everything inside lets us run our newscast,” he says. “For a typical newscast, we stack the show up ahead of time really and only need someone to hit a button to advance it.

“If it’s just a normal, nightly show, a 5-year-old could run our newscast.”

Hope it saves them money, because it sounds cheap to me

My main issue with virtual sets is that they still look too artificial to be truly convincing. And if you can’t pull off the illusion of a real set, why bother?