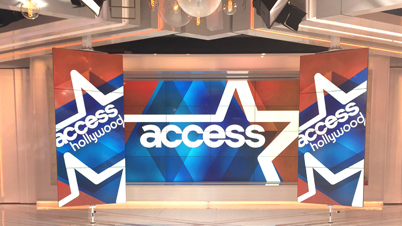 Producers and distributors are hard at work revamping and tweaking magazines, game shows and talkers to improve ratings come September. Nothing’s off limits, including sets, hosts, formats and staff. Case in point: Access Hollywood, which is getting a new set behind those doors.

With daytime syndicated TV now filled with repeats, it may seem that the distributors and producers are taking the summer off. Far from it.

They are working hard, overhauling sets, tweaking formats and changing hosts to make their shows more appealing to viewers and advertisers. In some cases, new producers are stepping in.

Access Hollywood, which was flat year to year in some demographics and down in others this past season, is getting a makeover. A colorful new set — recently rolled out on its companion Access Hollywood Live — features large monitors showing viewer comments from the shows’ social media.

“By 7:30 at night, let’s not kid ourselves, most people have heard these stories,” says Rob Silverstein, executive producer of Access Hollywood and Access Hollywood Live. “We need to give viewers something different.”

The show will rely less on scripts and more on the co-hosts chatting about the day’s celebrity news and what’s trending on social media.

“I may even get rid of the teleprompter this year,” says Silverstein. “People want information, different points of view and they want us to advance the stories. Our audience notices that.”

Access Hollywood is looking for a new co-host to replace Shaun Robinson. In June, she left the show after 16 seasons to develop programs with NBCUniversal.

“We’re always looking around for hosts,” says Silverstein. “I would expect an announcement about that within a couple of months. I imagine every agent in Hollywood has already contacted me.”

Access Hollywood will also celebrate its 20th anniversary this season with segments and clips from past seasons one or two days a week.

Warner Bros.’ panel talk show The Real produced by Telepictures had a promising first season – it was the No. 1 rookie daytime talk show. But ratings never really took off.

To give it a boost, the show will tape closer to broadcast than it has so that Loni Love, Tamar Braxton and the other co-hosts can be more topical.

“Last year was a straight syndication model. So, by the May book everything was evergreen. I think this season fans will really enjoy hearing the ladies talk about what’s going on in the world.”

The Real will continue having celebrity guests and may feature more musicians than in its first season. And its co-hosts will head outside the studio far more than they did last season.

“They’ll knock on people’s doors to do things like help fans get ready for a date or cook a meal for their husband,” says Miskowiec, whose credits include Warner Bros.’ The Tyra Banks Show, Disney-ABC’s Katie and ABC’s Good Morning America. “It would be fun for them to be out and about, like doing interviews on the Red Carpet.”

After suffering ratings declines and much criticism about the quality of its medical advice last season, Sony’s Dr. Oz is taking steps to right itself.

The show last month added Dr. Michael Crupain to the staff. He’s overseeing medical information on the show, vetting scripts and guests, and serving as a liaison to the medical community.

Chiaro says the show will be addressing “many new areas this fall, including keeping our minds healthy, [focusing on] how stress, anxiety, sleep and depression affect all aspects of our well-being.”

Who Wants to Be a Millionaire is bringing back some elements from its original format to jack up the excitement on the long-running game show, which saw its ratings slip last season.

“The main goal of the tweaks is to bring back the drama,” says James Rowley, who joined Millionaire last season as executive producer. “An intense, one-on-one battle between a contestant and 14 questions. No easy answers, no jumping the questions.”

Contestants, for instance, will answer questions with progressively higher dollar amounts from $500 to $1 million, rather than randomized dollar amounts.

Millionaire’s 50/50 lifeline, where contestants can reduce the number of multiple choice answers to two from four, will also return.

In April, Disney-ABC announced that The Bachelor host Chris Harrison will replace Terry Crews as host. Last season, Crews took over from Cedric the Entertainer.

Late last season, Meredith tweaked its single-host format with guest co-hosts and segments with a panel of co-hosts. Those elements will likely continue in season two, according to industry sources. An NBC spokesperson had no comment.

NBCUniversal’s Jerry Springer will highlight its 25th anniversary in every episode this season with graphics and clips from past seasons.

MagicDust Television, which produces viral video show Right This Minute, by September will have a new co-host to replace Beth Troutman who’s leaving the show.

And game show Celebrity Name Game with host Craig Ferguson, produced by FremantleMedia North America and distributed by Debmar-Mercury, will announce changes to its format by September, according to sources.

Tags: Access Holllywood, Dr. Oz, syndication, The Real, Who Wants to be a Millionaire