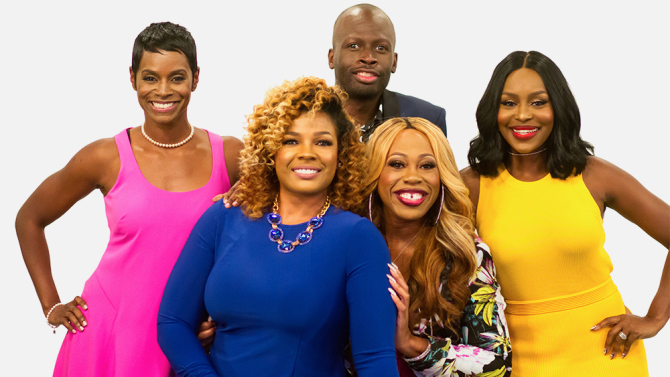 Sister Circle will be Tegna’s second original program to launch this fall. It will also air live on TV One.

Tegna’s latest original show, Sister Circle, a live, daily talk show hosted by a panel of four female hosts, will premiere on Monday, Sept. 11, on 12 Tegna stations and will also be shown on the black-targeted cable network TV One live at 9-10 a.m. ET.

This is the first time TV One, which reaches 59 million households, will carry original programming from a local station group. Sister Circle will be produced out of Tegna’s WATL Atlanta and reach 60% of U.S. television households, Tegna says.

Sister Circle, Tegna says, “will empower and inspire African-American women and include news and insights on relationships, parenting, fitness, personal finances, the latest trends and the joys and frustrations of everyday life, all from the compelling, humorous and sincere perspective of the show’s hosts.”

The show will also feature interviews with celebrity guests and expert opinions on “key and relevant issues.”

Sister Circle will also offer multiple ways for the audience to engage in the program, including the launch of a live, interactive polling app, which will help drive discussion across social media 24/7.

“We are excited to bring this diverse and groundbreaking live show to audiences across multiple platforms,” said Bob Sullivan, Tegna SVP of programming. “Audiences will love the chemistry and personalities of our hosts and engaging with them across platforms throughout their day. The show will discuss important issues facing the African-American community and offer insight and perspective that is not easily found on daytime TV. We are excited to bring the show’s point of view to our Tegna communities and thrilled to partner with TV One to air the show nationally. The channel represents the best in black culture and entertainment and Sister Circle is a perfect fit in their morning news and lifestyle lineup.”

D’Angela Proctor, TV One’s head of original programming, said: “The collaboration between TV One and Tegna allows us to present a talk show uniquely tailored to African-American women that will bring the energy and fun of a good get together with your best girlfriends to our daily morning line up. Watching Sister Circle will be like having brunch with your best girlfriends every day. While the audience will come for the conversation, they’ll stay for the sisterhood.”

Veteran television executive Helen Swenson has been named the show’s senior executive producer and showrunner. She has spent more than 30 years in live television, program development, sales, digital and marketing. As SVP of The Weather Channel, Swenson created and developed “Wake Up With Al” featuring Al Roker. Swenson has also served as general manager and news director at various television stations across the country.

Look at their ownership list and chose the dozen with heavy AA population.

Or they could, you know, just include it in the press release.

Yeah leaving out the stations is a pretty big miss.

TEGNA needs to Sell to a broadcaster who has a clue!!!But there are few left!!!

I agree would help if the 12 TEGNA stations that are going to air Sister Circle which I doubt that WZZM is one of the 12 stations going to test Sister Circle. I’m not interested in Sister Circle I don’t see it going national just my opinion.