Back to TVNewsCheck Home Print this page
TVNEWSCHECK'S TV2020 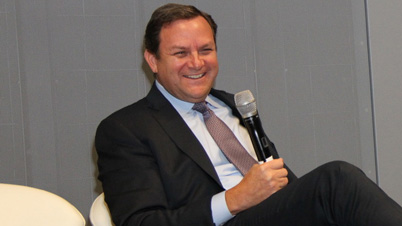 Mark Lazarus, chairman of NBC Broadcasting and Sports, said the network faces changing sports consumer habits that have affected ratings, but it’s making a full court press with its upcoming Super Bowl and Olympics coverage. He also said ATSC 3.0 presents an opportunity for its stations if it can find “the right balance.” (Photo: Wendy Moger-Bross)

NEW YORK — NBC will air both the Super Bowl and the Winter Olympics in 2018, but even such major events present their audience challenges.

Lazarus says a rapid decline of adults 18-34 ratings, the continued proliferation of sports content across the internet and the divisive recent protests within the NFL have presented mounting challenges.

To that end, Lazarus told TVNewsCheck Editor Harry Jessell that ad sales for next year’s Super Bowl are ahead of schedule, acknowledging that the Olympics sales were coming along more slowly “but starting to pick up steam.”

Lazarus says NBC plans to make the most of its 6,000 hours of Olympics coverage with every event available through broadcast, cable or digital streaming, and it will sell to advertisers across all of those platforms. NBC plans to help its affiliates with their own marketing and sales efforts by providing them with the video assets it’s currently gathering on their local athletes.

For the first time, Olympic coverage will also go live across the entire country in primetime.

On the football front, Lazarus says the ratings decline trend isn’t necessarily a steady one and “is going to go game to game, season to season,” not that that’s likely to result in a better deal when it renegotiates rights with the NFL.

Talks over Thursday Night Football are slated to begin within the next 90 days, he said. NBC currently tri-casts the game with Amazon and the NFL Network, and Lazarus feels the network is going in with an edge.

“If you talk to NFL owners, they think a big part of their dominance in the American sports landscape is because they have been loyal to broadcast television,” he said. “There’s an advantage to incumbency when the decline in cable subscribers has caused the distribution to widen.”

Lazarus was tentative about the potential role of 4K sports broadcasts, noting that NBC has done some experimenting with it but has cause to be wary. Partly behind his reticence is Japan skipping right from 4K to 8K, for one thing. For another, he said that NBC was quick to embrace HD but took more of a wait-and-see approach to 3D.

The NFL hasn’t yet put the 4K issue on the negotiating table, he added, though NBC is investigating 4K prospects for the Super Bowl.

On the ATSC 3.0 front, Lazarus said NBC may take a shot at implementation.

“We do believe that it should be a voluntary standard,” he said. “But our station group believes there is opportunity and will look for the right balance between where we sit today and 3.0.”

There may also be opportunities on the M&A front. While Lazarus said “we’re not actively seeking acquisition,” he acknowledged that if the right fit emerged for potential NBC-Telemundo duopolies in a bigger market, “those would be of interest.”

Lazarus said he isn’t worried about the consolidations sweeping over the industry and how they might affect NBC’s relationship with its own affiliates. “We provide them great value and they provide us great value,” he said.

The only sports worth watching on TV are..Golf…The Olympics and College Sports..The NBA, NFL and MLB are union infested and the players do not care about the fans..It will lead to a hard fall as witnessed by the NFL debacle led by a union Thug named Demarius!!

Sports used to be the one thing that could pull people together no matter what their race, religion and political preference. I cannot believe that in 2017 we cannot use this and find a way to make change and help solve some of the problems we face. Imagine if the right people(players) from the major sports were able to have an audience with President Trump and come together to help make change where change is needed. Ratings are wonderful but the opportunity with sports to really make a difference would be my choice for the first step.