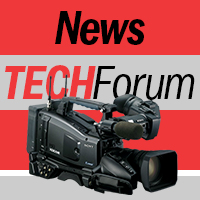 Cutting-edge news video journalists will share how emerging technologies are shaping their storytelling at NewsTECHForum on Dec. 10 at the New York Hilton. Matt Danzico, head of NBC’s Left Field; Emily Kassie, director of visual projects for The Marshall Project; Matt Pearl, chief of storytelling and development for Tegna’s WXIA and Frederic Roux, VP of sales for Dalet North America will show and discuss examples of their, or in Roux’s case his clients’ groundbreaking work. TVNewsCheck’s Special Projects Editor Michael Depp will moderate the discussion.

“New digital tools have invariably sped up the evolution of how we tell powerful news video stories,” Depp said. “Matt, Emily and Matt are expanding the boundaries of TV news’ vocabulary in their work, while Frederic has a broader view of how broadcasters around the world are doing so. I expect a fascinating deep dive into how technology is opening up new frontiers in storytelling.”