At NAB 2019, a year after a major corporate overhaul, the company unveiled a new maintenance program for customers with aging legacy equipment and announced a major customer win for its advertising software with Australian broadcaster Nine Network.
By Glen Dickson | April 8, 2019 | 9:29 a.m. ET. 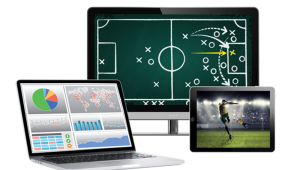 LAS VEGAS — Imagine Communications, which announced at NAB 2018 that it was reorganizing its business to respond to a challenging broadcast market, says that a year later it is making progress under a revamped management team.

At NAB 2019, the company unveiled a new maintenance program for customers with aging legacy equipment and announced a major customer win for its advertising software with Australian broadcaster Nine Network.

Imagine CEO Tom Cotney, who replaced Charlie Vogt in December 2017, said his decision to separate Imagine’s advertising software from its playout and networking products and manage the divisions like “two separate companies” was largely to make privately-owned Imagine’s business easier to understand for investors. It also meant that Imagine would stop subsidizing its legacy hardware business with free cash flow from the ad tech side.

“We had to do it for own financial viability,” said Cotney of the reorganization.

Cotney added that Imagine’s previous management had been too focused on larger-revenue customers that were mostly hardware-based, when that business was steadily declining. Since coming on board Cotney has changed 50% of Imagine’s management team, either through outside hires or reassigning in-house personnel, and placed more focus on services by starting a consulting division. Imagine’s revenue mix is now 24% hardware, 41% software and 35% services.

Like other large broadcast vendors, Imagine is seeing growth in new IP-based deployments and is continuing to pursue large projects with customers who want to virtualize operations or adopt cloud-based playout. But the company is also looking to make money now by addressing customers who either don’t have the money to make the move to IP or simply aren’t ready to do so.

At the NAB Show, Imagine announced that it has teamed with Plano, Tex.-based Fortress Solutions to offer a whole-infrastructure care and maintenance package, Imagine Service Fortress, which will provide hardware support and service for legacy Imagine equipment, as well as hardware from other vendors, through a single point of contact.

“We want to be a relevant partner to the customer who just wants to sweat the assets they have,” said Cotney.

While many vendors stop hardware support or software upgrades for products that are older than five years, Cotney said that Imagine is now generating $1.5 million in new revenues simply by bringing old Imagine gear back onto the company’s maintenance plan. Fortress Solutions is also able to support other vendor’s gear by reverse-engineering their products, and Cotney says Imagine is now providing maintenance to a customer with a large installation of Grass Valley gear.

He said that Imagine Service Fortress is targeted at the customer that  doesn’t yet have the budget for IP and wants to “avoid tactical upgrades” and “scale with the least amount of financial waste.”

Shifting the focus to its newer products, Imagine also announced that Australian broadcaster Nine is using Imagine’s xG GamePlan ad booking optimization software as part of its automated TV trading platform, 9Galaxy. As it moves its advertising model away from spot-based sales to audience-based sales, Nine is now using xG GamePlan to optimize advertising inventory across four channels, each with five regional variations.

Some of the key features of xG GamePlan include “Smooth,” which reduces manual processes by analyzing spots booked into programs against business rules; “Inefficient Spot Removal,” which manages ratings predictions changes during the life of the campaign by canceling spots that will no longer reach a specific demographic; and “RightSizer,” which addresses campaigns that are overdelivering on ratings delivery targets by a certain percentage by canceling the least efficient spots.

Warwick Sharp, director of sales operations for Nine Network, said   the broadcaster has been able to reduce some headcount through automation but that the big goal of the 9Galaxy initiative is improving sales yields through inventory optimization when dealing with an increasingly fragmented audience. To that end, Nine is now using xG Game Plan to handle scheduling on 35% of its inventory, working in conjunction with machine-learning algorithms that Nine developed internally to forecast viewing for its shows.

“In terms of delivering audiences, GamePlan is looking at all times in terms of the entire audience delivered for every spot,” said Sharp.