Developments in TV news graphics have seen a host of improvements from better real-time flexibility to more streamlined workflows and even monetization prospects.
By Jennifer Pallanich | June 13, 2019 | 10:03 a.m. ET.

One of the biggest challenges broadcasters face when it comes to producing 3D or augmented reality graphics is how long it can take to generate in relation to its “limited shelf life,” says Mike Mougey, VP of broadcast sales at Baron.

“Just because a system is capable of creating graphics doesn’t mean you’ll see a lot of it on the air until it becomes very easy, fast and economical to do,” he adds. “We do some of the heavy lifting for them.”

Daily, Baron delivers about two dozen explainer graphics regarding the weather for the day as well as graphics about topics like how a tornado forms or about river flooding to organizations that have a Baron Lynx system. The meteorologist can then download and use the graphics in the broadcast.

Augmented reality graphics, such as rain falling from clouds, displaying in live shots can be a challenge to interact with, says Bill Dow, head of media and entertainment solutions at The Weather Company, an IBM business. 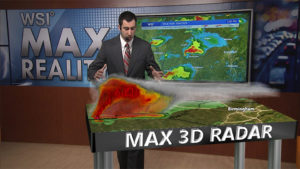 “How does the presenter know what’s actually being seen?” he asks. An app like Max Connect, which compliments the company’s Max Reality augmented reality weather technology for creating 3D images of storms and atmospheric events, runs on a tablet and allows the presenter to “control their show and interact with elements in the scene.”

Such an element in the scene may include an augmented reality explainer including a call to action or a safety angle, he adds. The Weather Company also provides such weather explainer graphics to its customers and intends later this year to release its own system for managing weather and traffic assets so stations in a larger group can easily share content, he says.

Graphic tools such as those available from Maxon aim to make it possible for a single artist to generate 3D graphics. Paul Babb, head of worldwide marketing, says a single artist now can create a graphic that 10 years ago would have required a team of programmers.

The company’s Cinema 4D makes it possible for organizations to incorporate 3D elements into their broadcast graphics, interstitials and station IDs, to name a few, he says. Cinema 4D and its 3D workflow are “one of the easier packages to pick up and learn.”

One of the things Babb has seen change over the last few years is that software is putting 3D graphics development “in the hands of graphic artists” rather than programmers. 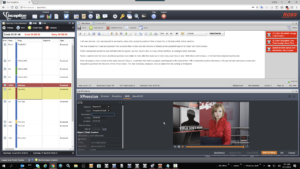 Improving the workflow is a key way to reduce the workload on a journalist and minimize potential errors when it comes to graphics, says Patrick Twomey, director of marketing product management and business development–Xpression at Ross Video. Ross’ XPression is intended to help create “high-impact” content and reduce the cycle-time to air.

“We are trying to make sure the workflow to get a graphic from concept to screen is the shortest cycle time possible,” he says. “We want to make it so the journalist isn’t feeling overwhelmed.”

For future improvements to XPression, Ross will “focus on what the journalist has to do to get a graphic onscreen, and that will tell you what the improvement spots are.”

One way of bringing more photorealism into augmented reality is by using multiple rendering pipelines. “Many vendors rely on one rendering pipeline exclusively,” says Eduardo Mancz, SVP of sales for the Americas at Vizrt. He says each rendering pipeline has certain strengths. “Mixing and matching different technologies is a key factor to success.”

One of the trends Mancz has noticed is an increasing reliance, particularly by big networks, on large video walls as a storytelling tool. 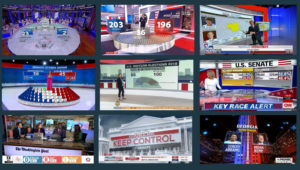 “Video walls are key for any kind of studio project today” as a backdrop for the presenter, Mancz says. Organizations are exploring different aspect ratios and shapes, he adds.

Camera tracking data can trigger changes in the graphics that appear on the video wall to “give a unique experience,” he says.

Studio walls, such as those in use by NBC Sports’ Football Night in America, are increasingly popular in new studios, ChyronHego CEO Marco Lopez agrees.

“We’re seeing more of these [studios] being peppered with small and large screens, whether vertical or landscape, and video walls,” Lopez says. “At one point, everyone was concerned about where things are on-air, but now it’s also about the graphics behind or beside the talent, and being able to put up fresh and in-context graphics is nice to see.”

Day-to-day usage of augmented reality and virtual sets has been limited, according to Lopez. Primary reasons, he says, are the complexity of configuring virtual sets so the tracking system can follow talent moving around the stage and the need to build complex 3D sets that “have the realism of a purpose-built set.”

The difficulty includes getting reflections, textures and lighting right to create a photorealistic set, he says. News groups, he notes, “don’t have a lot of operations people who can manage these complex systems.”

Fresh, which ChyronHego launched at this year’s NAB Show, tries to solve some of those challenges. It uses one of the most advanced rendering engines available to help build photorealistic scenes, he says. Fresh works within the company’s Camio workflow tool.

While sports may be a catalyst in innovative graphics, Lopez says, news coverage, particularly during elections, is another driver. Presenters are increasingly turning to touchscreens to interactively present a story through augmented reality graphics, he says.

Such innovations are present not just with sports and presidential elections, but also in day-to-day news, Lopez says. 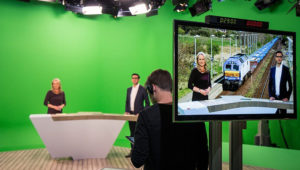 Avid’s Maestro | Virtual Set integrates hardware, software and camera tracking to produce unique virtual environments that might not be physically or financially possible with a conventional set. (Courtesy of Avid)

Virtual sets are “getting more and more sophisticated,” says Ray Thompson, Avid’s director of broadcast and media solutions marketing. One of the draws is the ability for the broadcaster to rebrand at will and still reflect a consistent brand without having to build physical sets, he says.

Graphical elements in ads, such as those during a sporting event, can be updated moments before broadcast. Ciaran Doran, EVP international sales and marketing for Pixel Power, says ads can be made “dynamic” by including graphical elements that can be tracked and updated.

One application would be an online betting company placing an ad during half-time showing odds and encouraging people to go online and bet “which team’s going to win, or get the next goal, or get the next red card,” he says.

Alternatively, a sponsor may choose to congratulate an athlete for scoring the first goal in the game, he says. “It’s almost live.”

The ad connects the content of the ad with what has just happened in the game through the simple expedient of entering data into a text file to create the text, he says.

Such dynamic live ads are running on Sky TV and ITV, he says.

“We believe it earns them more revenue by making the viewer experience more engaging,” Doran adds.

VR Slower Out Of The Gate

But while broadcasters are embracing augmented reality for graphics and moving toward virtual sets, uptake on virtual reality is lagging.

“We’re starting to get the technology to provide that,” Thompson says.

Artificial intelligence could “further enhance” the virtual reality experience, he adds. For example, all the ads in a virtual football stadium could be catered to the viewer, who would feel like they’re “on the 50 yard-line,” he says. “We’re trying to figure out how to monetize the stream.”

Machine learning will ultimately make the virtual reality more sophisticated, Thompson says. “It will have more intelligence about what it shows you while you’re in that virtual experience.”

Netflix Cuts Definition Of A ‘View’ Down To 2 Minutes