Social media platforms are fast evolving, and newsrooms that have come to rely on them are turning to new tools to keep up. From more granular analytics to better tools for incorporating social content into stories, newsrooms — and the vendors they work with on social — are moving along a sharp learning curve.
By Jennifer Pallanich | August 22, 2019 | 10:32 a.m. ET.

In the realm of social media, nothing stays still for long.

For newsrooms, social media has changed from a reach and volume game to one of engagement. Analytics help them understand their social media audiences at a very granular level, while other technologies help news organizations keep up with the demands of constantly feeding content to multiple social media platforms.

Social media activities at news organizations are constantly evolving, often guided by analytics as they work to bring audiences from social platforms to their own digital properties.

“That’s where the proof is in terms of performance,” Hale says.

Dataminr quickly alerted the WNYW digital team of a potential shooting at a Texas Walmart on Aug 3. They were able to publish breaking news across the station’s digital platforms and social media within minutes. (Source: WNYW)

Gray tends to use CrowdTangle for gauging Facebook performance and a combination of Social News Desk, Google Analytics and Google Data Studio to track engagement and link clicks. Those clicks, he says, are where the organization has put a lot of focus because “social media is an audience extension and growth platform for us.”

The metrics “help us identify success stories and problems and reinforce that our stations look at actionable data that affects our bottom line,” Hale says.

Gray is always evolving its social media approach because the “things that work on the individual platforms shift so much. We would be in a better position if we had some sort of clarity from the companies that provide the social media platforms themselves” about what the platform is prioritizing, which can lead to something of a love-hate relationship.

“We love the audience,” he says. “We don’t like ceding so much control.”

Every day, Fox O&O WNYW New York holds a social media meeting to talk about the station’s metrics. The numbers come from Share Rocket results, which Dan Carlin, the station’s VP of programming and research, refers to as the “daily report card.”

The station has used Share Rocket for several years.

“Before that, we were flying blind,” Carlin says. “We didn’t know how we were doing on our platforms. The more you know the better you’ll do.”

For instance, Luke Funk, WNYW’s digital content creator, says the station does not do a lot of prescheduling and automation of posts.

“When using tools that automatically publish things to social, it’s not as effective,” Funk says. “It’s dry, not catered to our audience. We like the human touch on elements.”

That means hashtags, tagging individual people and writing specifically to the mood of the story.

“If you’re not getting any engagement, it’s just clutter,” Funk says. 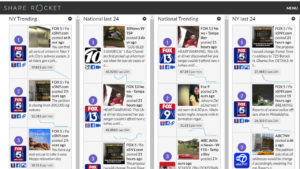 Everything the WNYW team does is aimed at driving traffic back to the station’s digital properties, Funk says.

“Having a fantastic Facebook page and a couple million likes and engagement is great, but if it’s not driving people back to your digital properties and television, it’s only lining Facebook’s purse,” he says.

Jill Nicholson, senior director of customer education at Chartbeat, says she’s seen customer focus shift from not just reaching people but reaching the right ones who will become loyal to the brand. Analytics can help social media managers understand the quality of the readers their posts are reaching, she says.

A deeper understanding about how the readers consume the story and how frequently they visit is “changing the way stations think” about the strategies they use on each social media platform and how to leverage that for acquisition and reader retention, Nicholson says.

“Each of those social platforms has its own personality and relationship with readers,” she says. “Some stories are more suited to certain channels than others. If you know what’s likely to resonate on those stories, you get a better return on investment on the stories that you post on social.”

By using analytics, she says, it’s possible to zero in on what works and why, making social media posting more efficient.

Stories that resonate on social media tend to have a human or emotional component, Nicholson says. For instance, Chartbeat worked with a local news publication to determine why crime stories did well on Facebook. A little digging into the data revealed “it was crime stories with a family component. Not that a building burned down but that it burned down and a family lost their house.”

Understanding that pull helped the publication fine-tune its posting strategy in a way that led to increased engagement, Nicholson says.

When tracking performance, though, she says it’s best to watch overall trends rather than day-to-day spikes and drops. A best month and worst month of Facebook can vary by up to 75%, she says, often due to factors beyond a newsroom’s control such as changes in algorithms or the news cycle.

Chartbeat’s big initiative for 2019 is to understand subscription behaviors, how tactics have to change to drive subscriptions and the platforms’ conversion potential. 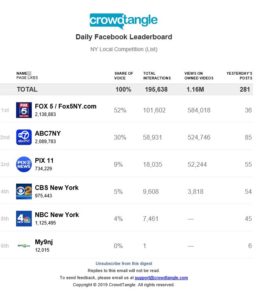 Analytics helps social media teams understand what works and what doesn’t, and a different set of tools help them create, test and post content.

Creation of the content often starts with a social listening tool like CrowdTangle or Dataminr to point to topics audiences will care about. Then it becomes a matter of how difficult it is to bring social media content into the workflow.

“What are the challenging elements of bringing in media from social into the newsroom,” asks X.News CEO Andreas Pongratz. One is data silos for legacy systems, and another is the need to curate and verify sources, he says.

A product that can seamlessly bring vetted social media content into the production workflow can drive efficiency in the content creation phase. Pongratz says X.News integrates media “from the multiverse of sources” into the production system without needing multiple people to prep the material.

Many news outlets organize their digital and traditional assets as separately as the teams themselves, she says.

“It should be more fluid, and potentially even combined,” she says. “If the online team finds a great video from a breaking news situation, now, it’s a manual process to alert the broadcast division that they have this content because they’re not using shared tools. There’s a disconnect there. It requires extra effort.” 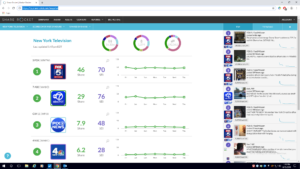 The more centralized the workflows and the more common tools these teams use eliminates redundancies in effort and yields shared information and creative collaboration, Jarvis says.

Zena Burns, SVP of strategic marketing and brand development at Futuri, says viewers are “very connected with their favorite channel brands” and want them 24/7. Only being live for a few hours a day makes it difficult to meet those expectations, she says. Futuri recently launched TopicPulse Instant Video, a turnkey, white label complement to the original video content the channels are creating.

These videos, largely human interest stories, are intended to help organizations give their viewers short, quick-hit social videos on the top trending topics of the day that are particularly relevant to the demographics of a social media platform rather than the on-air demographics.

Looking ahead, newsrooms should only expect more constant change from social platforms, and vendors are doing their best to help anticipate those shifts.

Kim Wilson, Social News Desk president, says Mark Zuckerberg’s statement earlier this year that the future of Facebook is private is “important for news to pay attention to.”

The statement signals potential changes to the way Facebook and other platforms operate, which could have an impact on how news organizations reach and interact with their audiences, she says.

In anticipation of potential changes on a major social platform, SND is beta testing the Facebook Messenger Experience, which automates the sending of customized headlines via to audience members via the Facebook messenger.

She acknowledges the messenger experience is experimental but believes it’s good to “place some small bets in social.”

“We are constantly evaluating and being offered opportunities to use some of the latest tools for social media,” he says. “Our social media evolves every day.”