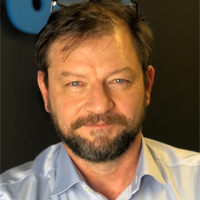 Turnham will lead and help build Newsy’s newsgathering unit, with, the company says, “a continued focus on serving viewers compelling, ambitious and objective journalism.” Turnham will report to Christina Hartman, Newsy’s vice president of news and programming and is based in Newsy’s Washington, D.C. bureau.

Turnham got his start in news as a copy aide and writer for the Washington Post, before moving on to CNN as a producer for CNN’s political unit, the network’s Senate producer, the documentary and investigative team, and then as senior producer for Anderson Cooper 360.

Turnham then moved to ABC News as lead Washington producer for This Week with George Stephanopoulos for the 2016 election, then to ABC’s Global Affairs unit where he was senior producer for chief global affairs correspondent Martha Raddatz.

From there Turnham helped produce ABC’s primetime documentary series on 1969, focused on the impact of the Vietnam War on U.S. political and social life.

Over his 25 year career in television news and documentaries, Turnham has won or shared in several major awards, including Peabodys for his work on the aftermath of Hurricane Katrina and the 2008 presidential campaign.

He has been nominated for several Emmys for his work at CNN, Al Jazeera and ABC news.