With the streaming-only The News At 9, Graham-owned KSAT in San Antonio is playing with the boundaries of a traditional newscast, blowing open the time constraints of traditional packages and going bold with deep dives and different presentation formats.
By Michael Stahl | March 3, 2020 | 5:30 a.m. ET.

From the moment a viewer even decides to watch The News at 9 from KSAT, the Graham Media Group-owned ABC affiliate in San Antonio, Texas, they’ve committed to a unique experience.

Freshness at The News at 9, one of the few streaming-only newscasts in the country, could never have been half-baked. After a soft launch in September 2018, when it aired just two or three times a week, it’s since been tweaked, and has grown into an every-weeknight affair.

“We built out, like, another television station,” Kearney says of the livestream.

Chock-full of syndicated and original programming, and supported by TownNews’ CMS, the livestream is good for locked-in viewership or, as Kearney says, “if you’re used to turning on the television when you get home from work, and you sort of put it in the background.”

But The News at 9’s palatable mix of laid back and hard-hitting tonality exemplifies the station’s efforts to continuously find new audience members in its market.

With a set located in the middle of the station’s newsroom, it’s not uncommon to see otherwise off-camera staffers in plaid shirts and jeans walking in and out of background offices.

But if one watches enough of the streaming newscast at 9 p.m., it’s clear that everyone at KSAT with a thumbprint on it is serious about the stories they tell, and the flexibility in which they tell them. The News at 9 bucks trends with extra-long deep dives, gives international goings on a relatable local bend, and distills some of the day’s biggest developments into bite-sized information nuggets. All of this freedom has been made possible by the streaming capabilities.

“We saw an opportunity to try to evolve our storytelling in such a way that it would be maybe equal parts approachable for people who are searching for information in new places, but it’s also approachable to people who know who KSAT is,” Kearney says.

Kearney observes that San Antonioans “have an expectation of what KSAT is going to deliver them.” But even if The News at 9 “doesn’t look and sound and feel and act exactly the same way that they’ve been used” to, Kearney knows that “they’re still comfortable with the content, and they’re confident in us as their source.”

Perhaps because, as Kearney says, “there’s always some kind of audience for news,” KSAT has pumped up its news output since she took over as news director six years ago. Kearney says the station was producing 25 hours of news on a weekly basis in 2013, but now broadcasts 44 hours’ worth.

About two years ago, Kearney saw a competitor doing 9 o’clock news, and market research showed area viewers were often streaming at that hour. Generally, Kearney says San Antonioans are becoming “more confident and comfortable live-streaming their content,” so she and her team believed there was an opportunity in that time slot to build a livestream-only newscast.

Not at liberty to reveal ad sales figures or ratings, Kearney does say that, at this point, the station’s sales team is “very happy at the growth for our OTT platform.” The digital News at 9 seamlessly provides the station with content that can be clipped for website and YouTube video-on-demand. where more advertising can reside.

In looking to grow the audience literally from scratch, “We’ve done a ton of cross-promoting,” Kearney says. The News at 9’s anchor, Myra Arthur, is also the co-anchor of the 6 p.m. TV newscast. She and her co-anchor there will discuss the stories in the works for the 9 o’clock on a daily basis.

“We’ve also held [some] town hall meetings,” Kearney continues, “where we have invited people in the community to learn more about OTT in general, cord-cutting, and then spent a fair amount of time talking to them about the 9 p.m. show, and what makes it different, things they can learn, and how they can watch it.”

Though KSAT has nearly doubled its news output in recent years, it has not doubled its staff. The News at 9 was made possible by a rejiggering of schedules and expectations, and with only two new hires — a producer and photographer. A consolidating of duties for the 9 p.m. anchor, Arthur, was also in order, while producer Lexi Salazar slid down a time slot, from 10 p.m., when ABC cut back that hour’s newscast from 60 to 30 minutes.

“[We] gave her the freedom to create the newscast that [she] would want to watch, and that’s what she does, and she’s terrific at it,” Kearney says of Salazar.

“Working on the 9 p.m. show has forced me to question everything about the way news is produced,” Salazar said by email. “We have the luxury of being able to bend, stretch and sometimes break the rules. We’ve gotten in the habit of being deliberate with our choices and trying to make sure every story choice serves a purpose…. I’ve learned that just because something is tradition, doesn’t mean it’s the best way to do things.”

KSAT runs a nightly segment during the broadcast called “The 9 at 9,” a vignette of a few minutes with summaries of major local and national headline stories. Kearney says “The 9 at 9” garners robust viewings when it’s later cut and posted onto KSAT.com.

But sometimes accompanying “The 9 at 9” during the streaming newscast will be deep dives that run across “super blocks.” Topics range from an impactful 16 minutes on skyrocketing local property taxes — complete with Lego-brick and -minifigure demonstrations — to an entertaining 19 minutes on local Tejano music that delved into its origins, popularity and struggle for survival. 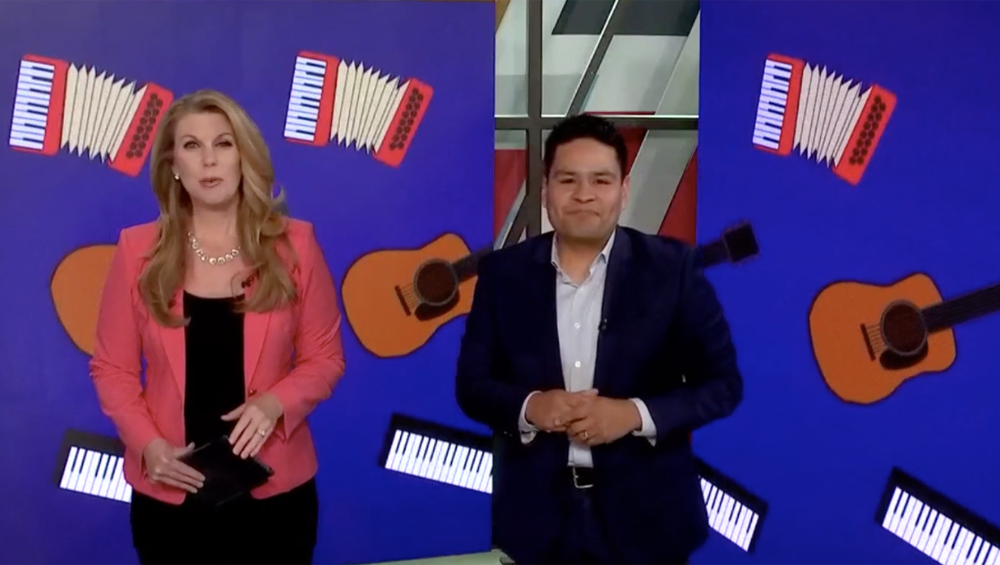 The News at 9 talks Tejano music.

“When you’re talking about being able to, on a local news level, dive into a topic as deeply as we can,” Kearney says, citing these stories as two specific examples, “that’s definitely not your typical, traditional media experience.”

When tensions between Iran and the U.S. recently reached a fever pitch, The News at 9 ran a 30-plus minute interview with a Iranian-born professor of international affairs at nearby Trinity University. She provided viewers eye-opening insight into Iranian culture and history from a perspective rarely accessible.

Kearney says as long as The News at 9 wraps by 10 p.m., its broadcast and individual story runtime fluctuations are not problematic. The station has plenty of digital content it can quickly splice in to fill time, and by producing more evergreen stories, there’s a chance that viewers will continuously find them online long after their original air dates, generating additional revenue.

“Each show is an opportunity for us to try something new,” Arthur said by email. “If we try something new and it works, we can tweak it until we nail it. If it doesn’t work, we move on to the next experiment.”

No Rest For The Weary

Kearney says KSAT is going about its business not just to produce great content in San Antonio, but also to hopefully inspire other Graham-owned stations across the country.

“We are thrilled that they are going all-in on experimentation,” says Catherine Badalamente, VP and chief innovation officer at Graham. “We really love the fact that we can see the audience growing and people literally are finding it. It’s exactly what we hoped we were going to have happen with our stations and our leadership.… They’re pushing harder than I think I could have ever dreamt up.”

But Kearney’s not one to rest on her laurels. After 32 years of broadcast news experience, she knows that now — perhaps more than ever — KSAT and the rest of the industry must continue to innovate if they expect to keep consumers tuned in.

“There’s definitely not a boring day here in the newsroom.”

All great ideas and shows commitment to the community…

Yet, one has to ask why the station doesn’t put this streaming channel on as a sub-channel so OTA viewers can watch.

In other words, are “broadcasters” really committed to being broadcasters or just over-glorified cablecasters/streamers?