Nielsen analyzed viewing data across its Local People Meter markets, which are 25 of the largest local markets. For persons aged 2 and older, local news experienced a 7% viewership lift between early February and the week of March 9. Among persons 25-54, the spike was higher, at more than 10%. Perhaps most interesting however, is that the lift among younger persons aged 2-17 was 20%.
By TVN Staff | March 24, 2020 | 6:00 a.m. ET.

As concerns and restrictions around the coronavirus heighten in the U.S., consumers are gravitating to local news outlets to stay informed about the impact of the pandemic on their communities. While the U.S. began to experience the impact later than other parts of the world, a recent Nielsen analysis highlights a notable spike in local news viewing between early February and early March.

Viewing data was analyzed across Nielsen’s Local People Meter (LPM) markets, which are 25 of the largest local markets as defined by Nielsen’s Local TV Household Universe Estimates. For persons aged two and older, local news experienced a 7% viewership lift between early February and the week of March 9. Among persons 25-54, the spike was higher, at more than 10%. Perhaps most interesting however, is that the lift among younger persons aged 2-17 was 20%.

“Non-adults have typically contributed very little to the profile of local news viewing,” said Justin LaPorte, VP, local audience insights, Nielsen. “In the week of March 9, however, when schools across the U.S. began to move to in-home learning, 25-54s added more local news to their daily routines. As a result, there was more viewing among non-adults.”

With America at home and flocking to local TV for news in this crisis, this may present a unique opportunity for advertisers to demonstrate their brand value.

As with any crisis, consumer behavior is quick to shift as disruptions unfold and evolve. And as concerns around COVID-19 heighten, the viewing behavior of people 25-54, a key selling demo for local advertisers, is shifting as well. Across the full complement of genres people are watching across major broadcast networks in the LPM markets, a few genres are benefiting more than others.

Local news definitely stands out, almost gaining five share points for P25-54 viewing in total to broadcast, increasing to 30.9% of all quarter-hours tuned across broadcast the week of March 9. General Drama, Participation Variety, Situation Comedy and Feature Film have also seen notable gains in their share of overall broadcast viewership. 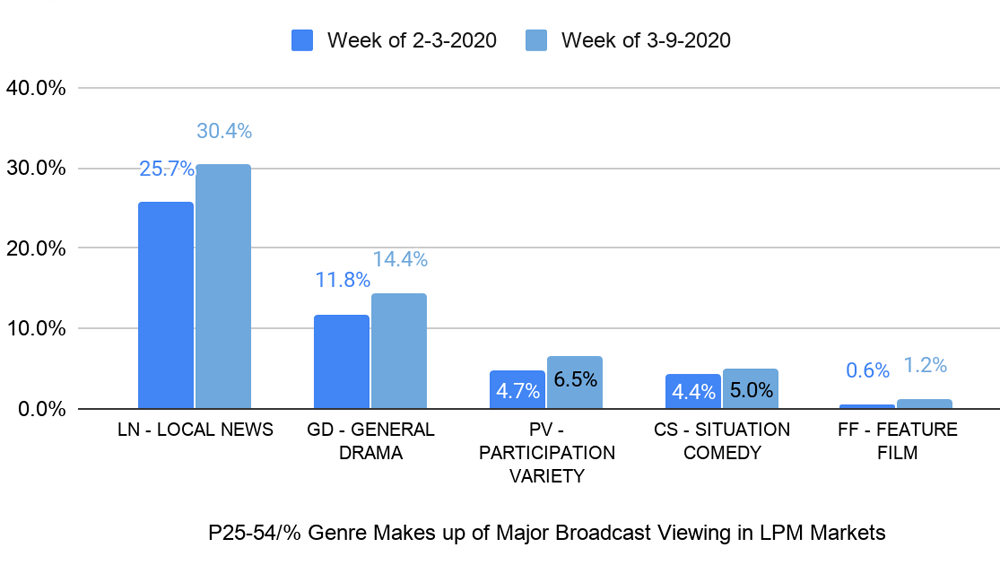