Back to TVNewsCheck Home Print this page
TVNEWSCHECK FOCUS ON BUSINESS 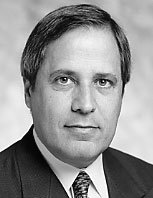 It turns out it’s broadcast veteran Tony Cassara (left) along with other New Young’s board members Tom Sullivan, Sheldon Galloway and Kevin Shea. The board gets an assist from Young President Deborah McDermott who oversees KRON San Francisco, WATE Knoxville, Tenn., and WLNS Lansing, Mich. Cassara says the $2.2 million annual management contract with Gray Television is really an advisory agreement. “They do not manage our stations,” Cassara says. “The general managers of those seven stations report to the board.”

In the long, strange trip of Young Broadcasting, things rarely have been what they seem.

“They do not manage our stations,” says broadcast veteran Tony Cassara, who serves on New Young’s board. “The general managers of those seven stations report to the board. The agreement says we’ll give Gray access to our facilities, our capital expenditure plans — any access you would give to a consultant we give to Gray. But they don’t make the final decision.”

In particular, he said, Gray is not empowered to hire or fire Young employees.

Ultimately, the board is in charge of all the stations, although general managers at the seven Gray-advised stations are empowered to make day-to-day decisions as long as they remain within the scope of their board-approved budgets.

“The board doesn’t want to be CEO of the company,” Cassara said. “We want the general managers to run their stations. The board is where the buck stops.”

Big-ticket items such as syndicated programming and major equipment purchases not already approved in the stations’ budgets are handled at the board level, he said.

One advantage of the advisory agreement with Gray is the potential for using the combined leverage of the two groups for such purchases. A publicly traded company, Gray operates 36 stations in 30 markets.

“We would team up when it makes sense for us to,” Cassara said.

The Knoxville and Lansing stations were excluded from the contract with Gray because Gray also owns stations in those markets, creating potential conflicts of interest.

Confusion over who, exactly, is running the show is understandable given that McDermott filled three open general manager slots last year before signing her new contract. Two of those hirings were at ABC affiliates covered by the Gray contract, WKRN Nashville and WTEN Albany, N.Y.

Due mostly to the financial overhang from Young’s ill-advised purchase of KRON in 1999 for $823 million, Young sought bankruptcy protection in early 2009.

During bankruptcy, Young reconstituted its board. The new board members are Cassara, Tom Sullivan, Sheldon Galloway and Kevin Shea. The only legacy member is Vincent Young, the one-time CEO of the old Young, who remains as non-executive chairman for an as-yet-undetermined period.

Different board members serve as the go-to guys depending on the issue, Cassara said. He and Galloway bring their experience and expertise to bear on operational issues, Sullivan on financial and M&A issues and Shea, on bankruptcy and restructuring issues, Cassara said. Sullivan and Shea typically share executive duties, he added.

Gray reports to board member Sheldon Galloway. However, Gray managers who are advising specific stations may work with McDermott on some issues, Cassara said.

A well-known industry figure, Cassara is fully qualified to run a string of TV stations.

After stints in broadcast sales, Cassara joined KTLA Los Angeles as sales manager and was later upped to GM. In 1982, he fronted the KKR-backed leveraged buyout of the station from Gene Autry for $245 million and he was still there when KKR sold the station to Tribune just two years later for a then single-station record of $530 million.

From 1993 to 2000, he ran the Paramount Pictures Television Stations Group. Starting in 2000, he worked closely with Jerry Perenchio in expanding the Univision network and station group until they were sold to a private equity consortium in March 2007.

Since then, he has advised investors and lenders in broadcast properties, a practice that led him to Young’s door.

Young’s ownership evolved during its bankruptcy. Current owners include Standard General, a Manhattan investment management/hedge fund with a 25%-26% stake; Oppenheimer Funds with roughly 20%; Credit Suisse with approximately 15%; and Highland Capital Management with about 12%.

Although they don’t hold board seats, representatives of those owners may participate in board meetings as observers.

The remaining ownership of Young — around 20% — is divvied up among 15-20 shareholders who own 1% or 2% each, Cassara said. They are not entitled to observer privileges.

“When we first came out of bankruptcy, there was a lot of confusion, I guess is the best way to put it,” Cassara said. “We had new shareholders as debt kept trading while we were still in bankruptcy. There were differences of opinion among shareholders on what they wanted to see done. We had to find a way to communicate with shareholders and a way to function so that we didn’t have just five different opinions. We established a weekly observer call and when we have a meeting, we get comments from the observers.

“I would say it’s settled down quite a bit from the way it started. It’s becoming much more of a harmonious and working board. It’s a lot better now than it was six months ago.”

It was at the height of the confusion, in mid-2009, that the still-evolving board hired Gray to manage the seven statios, leaving the remaining three under McDermott’s leadership.

Gray, competing with several other bidders, negotiated a $2.2 million contract during the time Young was unsuccessfully attempting an asset auction. The auction failed when no bidder met the reserve price.

In addition to the $2.2 million annual fee, Gray also negotiated an incentive bonus plan that called for it to receive a 25% cut of broadcast cash flow in excess of $38.6 million in 2010. Even though it was only marginally involved with the seven stations last year, Gray reportedly received a $6 million bonus for the year. That means Young’s 2010 broadcast cash flow was roughly $62.6 million and that Gray walked away with around 10% of it.

Cassara doesn’t think much of the Gray contract. “It makes no sense at all for Young,” he said. “However, it is a contract. It was entered into at a time when the people making decisions thought it did make sense.

“Gray really hasn’t done anything. We shouldn’t blame Gray for 2010 – or give them credit for it,” Cassara added.

Robert Prather, Gray president-COO, acknowledged the strained relationship with the board throughout last year, noting that the situation improved markedly late last year.

That wasn’t always the case. The ink was barely dry on the contract with Gray in 2009 when unsecured creditors, unhappy with the Chapter 11 reorganization plan proposed by Young’s senior lenders, submitted their own plan. The company had hoped to emerge from bankruptcy no later than the end of 2009 but the competing reorganization plans delayed the company’s emergence until June of 2010.

Sources familiar with the proceedings said subsequent maneuvering among various board members over who would actually run the company fueled confusion and acrimony and further delayed Gray’s involvement.

As recently as the end of November last year, Gray was still in limbo over its role at the seven stations. The flip side was that New Young’s new board was uncomfortable with some aspects of the contract with Gray, fearing it might run afoul of FCC restrictions.

“There was a lot of language in there that was inappropriate in terms of FCC rules,” said a source familiar with the contract. “It was unclear what Gray’s role would be in certain areas. The board balked. It didn’t want language or any activity that’s inappropriate for a non-licensee.”

Under the current scenario, Gray might propose changes at a station — automating certain production functions, for instance. But that’s simply an informed suggestion. The station’s general manager, if he or she agrees, would take that suggestion to the board for the final say.

Indeed, Gray plans to bring the general managers of the stations it’s advising to WOWT, Gray’s NBC affiliate in Omaha, Neb., to study what it’s done with automation. “We have an extremely automated facility there we think is cutting edge in the U.S.,” said Prather.

So what happens to the Young stations at the end of 2012, when Gray’s advisory agreement expires?

“But we’re coming out of a very big downturn and we’ve been able through bankruptcy to streamline operations. Young has probably one of the best balance sheets in broadcasting. There’s no urgency for us to do anything other than operate and grow the business.

“At some point these people will want to monetize the company. I don’t know whether that means go public or sell. That decision is at least a couple to three years away.”