NAB Reveals, And Revels In, 3.0 Progress 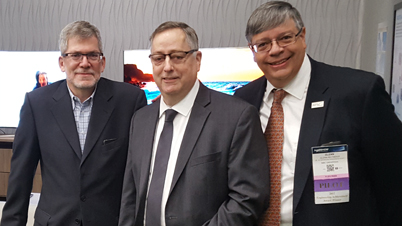 As the push to move TV broadcasting to the more powerful and versatile ATSC 3.0 transmission standard picks up steam almost daily, this week’s NAB Show let attendees get up close and personal with the new tech. The show featured two 3.0 pavilions (one with broadcast gear, the other with consumer tech); more than 15 vendors, universities, researchers and the NAB’s own initiative demoing different pieces of the 3.0 ecosystem. At the opening of the ATSC 3.0 Consumer Experience were: ATSC President Mark Richer (center), flanked by Richard Friedel of Fox Networks (left) and Glenn Reitmeier of NBCUniversal.

ATSC 3.0, the next-generation TV standard that’s been in development for several years, is on quite a roll, racking up a string of wins that would make even Vegas’ luckiest gambler a bit jealous.

Last week, the NAB, the Consumer Technology Association (formerly the Consumer Electronics Association), and others petitioned the FCC to authorize broadcasters to deploy the standard on a voluntary basis.

This week, proponents turned the NAB Show in Las Vegas into a showcase of the technology and how it could transform broadcasting with more robust signals, greater programming capacity, superior pictures and sound and its ability to interface with the internet.

The showcase included two separate ATSC 3.0 technology pavilions — one highlighting technology broadcasters will use to deliver next-gen TV (the Broadcast Pavilion) and the other featuring consumer-facing technologies, such as 3.0 receivers, home gateways, audio systems, antennas and emergency alerting (the ATSC 3.0 Consumer Experience).

Beyond the confines of the convention center, Sinclair Broadcast Group and its ONE Media subsidiary hosted 3.0 demos in a private suite at the Wynn Las Vegas. Invited guests were shown how the new technology could open up new business opportunities.

Consumers will choose to receive 3.0 off air not simply because they wish to cut the cord but because broadcasters will be offering them much more than they do today, said Sinclair’s Mark Aitken.

“There will come a day shortly where the kinds of services broadcasters are capable of offering match a value equation of consumers,” he said.

“Hooray for the creative thinking of the broadcast community that brought ATSC 3.0 from an idea into reality. Now we’ll see where we go from here, how we make it work.”

He said he would begin the long process of permitting use of ATSC 3.0 by inviting comments on the broadcasters’ petition by the end of this month. “We need to move with dispatch to get that in the public debate.”

All told, more than 15 vendors, universities, researchers and the NAB’s own Pilot initiative were represented in the Broadcast Pavilion.

Some, like the Communications Research Center from Canada, the Electronics and Telecommunications Research Institute from South Korea, the National Engineering-Research Center from China and the University of Basque Country in Spain are focused on the underlying technology of Layered Division Multiplexing (LDM) which makes it possible to deliver different types of services over the air in the same 3.0 channel.

“Layered Division Multiplexing allows you to put two signals on the same channel — one on top of the other — in a way that permits a receiver access to the upper layer and then the lower layer,” said Pablo Angueira, associate professor in the Department of Communications Engineering at the University of Basque Country.

LDM makes it possible to transmit in a single channel one robust service, such as mobile, and deep indoor reception, and in another a high data rate service such as Ultra HD, he said.

Others technology companies, like Junger Audio and Verance, demonstrated specific tools to enable next-gen TV features, such as personalized and immersive audio and interactivity.

“This product will take the MADI output from a Calrec desk [or other audio console] and allow a mixer to sit at a console with a 3-D panner to create objects and place them anywhere in 3-D space,” says Anthony Wilkins, international sales and marketing manager at the company.

“The unit then generates the positional, descriptive metadata that needs to travel with the object [to support the personalized and immersive audio features of ATSC 3.0 sound].”

“The watermarking architecture created by ATSC is in fact the first open watermarking standard to be developed,” says Joe Winograd, Verance EVP and CTO. “This technology is like a buried URL that will pass through MVPDs to trigger new interactivity.”

The Broadcast Pavilion also was the origination point of a live next-gen TV signal that was relayed to a 3.0 transmitter on Black Mountain, some 20 miles from the Las Vegas Convention Center and broadcast over the air.

For broadcasters less inclined to take the deep dive into the underlying technologies of 3.0, NAB’s Pilot initiative — the successor to NAB Labs — showed a pair of 3.0 home gateways in a living room setup, one each for side-by-side flat panel displays.

The gateways receive ATSC 3.0 signals off air and retransmit them as Wi-Fi signals to TV sets and other devices throughout the home.

“One of the most interesting things to me is that we have a runtime environment that allows broadcasters to create more engaging and pro-active services for the viewer,” said So Vang, NAB VP, Advanced Technology, of the gateway demo.

An important goal of the display was to whet the appetites of broadcasters for the types of new services they can offer viewers via ATSC 3.0’s unique combination of broadcast and broadband services, he said.

The gateways also will allow viewers to use their remote controls to access feature content pushed to and cached at the gateways over the internet, including targeted advertising.

“One of the classic things local stations do is weather,” said Vang. “This [the ATSC 3.0 gateway] allows broadcasters to create a simple weather application viewers can access on their sets. In the morning they get up, click and have the weather for the day.”

Gateways were also shown at the ATSC 3.0 Consumer Experience along with other technology designed to appeal to consumers.

Dolby demonstrated its AC-4 immersive, personalized audio codec for 3.0 deployments in the U.S., and Fraunhofer showed its MPEG-H codec, which has been selected for South Korea’s implementation of the standard.

One focus of the Samsung demo was interactivity and how it can be used to customize commercial playback and support new VOD services.

On the convention exhibit floor, vendors showed other products that will be crucial to making 3.0 service delivery possible for broadcasters, including the three major transmitter manufacturers exhibiting at the show: GatesAir, Rohde & Schwarz and Hitachi-Comark.

“We could look back on this as being a fairly historic week, depending on how this whole thing plays out,” said Dennis Wharton, NAB’s EVP of communications.

The broadcasting and electronics industries owe it to American consumers: mandate 3.0 FULL BACKWARD COMPATIBILITY so that millions of existing HDTV sets do not become obsolete. “Parallel transmission” would relegate existing HDTV owners to second-class status. That is unfair and counterproductive. There is historical precedent for backward compatibility: the successful transition from back-and-white TV to color back in the ’50s. Tom Wheeler and the other FCC commissioners must step up and protect American consumers; if they don’t, Congress will.

Obsolete? Just add an ATSC 3.0 tuner stick to a HDMI port on your older set. Still cheaper than paying for cable/sat.

As typical, @phillyphlash showing his paranoid self. 88.2% of the Nation with MVPD subs could care less whether it’s ATSC 1.0 or 3.0. In reality, aren’t those with a MVPD sub second class citizens already? Perhaps he would like to pay for a MVPD sub for 100% of the population so they won’t have their feelings hurt, lol.

I don’t know where you are getting this 88.2% number from. As someone who supports the cable industry in my professional life, I know for a fact that MVPDs are struggling. My company is struggling because the MVPDs are struggling. I’m a “cord cutter” myself. MVPD is really an obsolete technology waiting to die. Personally I have TV antennas (34 channels) and an internet connection. Certainly don’t need cable!!!

Three giants of RF in that picture. Thanks to all of them. Super stars

What does the 3.0 tuner stick cost and how about the anologe TV converter boxes. What would they cost.

ATSC 3.0 is Dead on Arrival – HELLO!!! An entire ecosystem has to be on board for this to work – go ask the device guys how happy they are about implementing new RF in their Devices. Gray Television understands this and everybody else is illogical and riding a pipe dream – even if everybody did get on board the technology would be obsolete before it gets fully commercialized. Heres a Bright Idea – Make OTT online video distributors that want to carry local broadcast TV – make them MVPD’s and don’t regulate the others like Netflix and Amazon and then let’s get retrans money….and this can be done asap and without an Ecosystem development initiative.