Back to TVNewsCheck Home Print this page
DMA 138: SALISBURY, MD 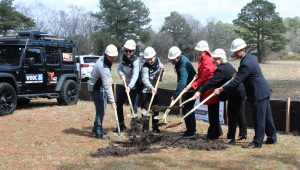 CBS-Fox affiliate WBOC is about to begin construction of a 908 killowatt solar farm behind its facility in Salisbury, Md. (DMA 138).

Laura Baker, VP-COO of station owner Draper Holdings, says delivery of the solar panels is expected this week, and the project is anticipated to be completed and running by June, weather permitting.

“We own 20 acres of land behind the station in Salisbury, and for years we’ve considered many options for its use,” says Baker. “Broadcasting is energy intensive. So what better way to use a portion of the land than to construct a solar field that is designed to cover 100% of the station’s energy needs.”

Baker says the company has partnered with Ultra Solar and Wind Solutions, which is an authorized dealer for the California-based solar manufacturer SunPower.

“SunPower has been one of the leading innovators in the solar industry for over 30 years and have consistently delivered the most advanced and highest performing products while pushing progressive sustainability practices”, said Bryan Russo, Sales manager for Ultra Solar and Wind Solutions LLC.

Russo says SunPower offers new, high-efficiency panels that will create more power in less space for the next 40 years. “This project will not only significantly help the station’s bottom line for decades to come, but it will also eliminate over 27,000 tons of CO2 from their footprint. It’s fitting that Delmarva’s News Leader would also be at the forefront of the move towards renewable energy in our community.”

Baker says: “We are especially pleased that these panels have an FAA approved no-glare coating. This is important because it will be safer for Chopper 16 to land in the field behind our station, and these panels will not disrupt air traffic to the Salisbury Airport, which often flies over our station.”

Molly Draper Russell, president-CEO, Draper Holdings, adds: “It’s important that we make an effort to protect the environment by reducing our carbon footprint. Our company has always been a leader of new technology. My father, the late Tom Draper, would be pleased that we are, once again, taking a step into the future while protecting the environment.”