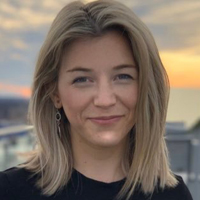 One morning a little less than a year ago, Caroline Patrickis, a digital reporter for the Sinclair-owned WJLA Washington, was scrolling through Reddit looking for stories to pitch to station management. She discovered a post about an immigrant-owned, Pakistani restaurant located a few blocks from the White House that provides free meals to homeless people.

“I pitched it, but no one seemed to care in the meeting,” Patrickis says. “I was like: ‘This is huge. How do you feed homeless people every day from a fancy restaurant? There’s no way.’ ”

Fortunately, she’d been given a fairly robust amount of autonomy at the station. So, ignoring the indifference on the part of her colleagues, Patrickis plowed ahead with the project.

The result was an incredibly moving piece that ran under two-and-a-half minutes, packed with inspiring sound bites and powerful images.

During one stretch of the video, with a stirring piano soundtrack, a homeless man walks to the counter at the restaurant and asks for food. Captions explain the man had been eating there twice a day for four years. In an interview clip, the owner describes some of the homeless as regulars, and says that he, too, had stretches in his life where he didn’t know if he’d be able to eat one day to the next. The owner is then shown doling out a mound of food to his homeless guest.

“No questions asked!” one caption reads. “The owner knows their orders by heart,” says another.

WJLA says the story reached more than 50 million people on Facebook. It was shared on Twitter by the likes of Meghan McCain, Mindy Kaling, Mark Hamill and Cory Booker.

“Something about it really struck a chord with a lot of people,” Patrickis says.

For her tenacity and a deeply thoughtful approach to social media content, Caroline Patrickis was chosen as the TVNewsCheck Social Media Excellence Award winner for media talent in 2019.

Patrickis was one of 15 nominees in the category determined by data partner Social News Desk’s live database of 12,000 local news Facebook pages. Social News Desk tracked 16 million posts by those pages, identifying those with the highest engagement per post as nominees in each of the awards’ four categories.

Hired two years ago as WJLA’s first digital reporter, Patrickis says the station brought her on board primarily to create original content for its Facebook page and build up its Instagram following. She says the Instagram account now has double the followers, and station management has grown increasingly invested in the work she produces.

“It was new for the station and for me,” she says of her role at WJLA. “But they have supported me fully.”

Getting 50 million or so viewers to see her work on Facebook is becoming a regular occurrence for Patrickis. She produced another piece that approached that milestone, about a local woman, Virginia McLaurin, who turned 110 years old. Patrickis showed up to her house with a cake and candles, throwing a mini celebration.

The segment included a clip of McLaurin dancing in the White House with the Obamas on her birthday four years earlier.

“I didn’t think I would ever, ever be able to get in the White House,” McLaurin says in an interview clip. “I was raised up in the South … I come from so poor, you know.”

“WJLA allows Caroline the opportunity to be as creative as she wants and take as much time as needed on producing original content,” the station said in statement to TVNewsCheck.

“However, we have a format for our social media videos that we believe contributes to the success of these stories,” the station said. “Consistency is key but at the same time, we grow and change as our audiences’ needs/wants change. We know that not all stories will go viral, but all stories count.”

Representatives of WJLA and the rest of 2019’s Social Media Excellence Award winners will discuss their work in a panel moderated by Social News Desk’s Kim Wilson at NewsTECHForum on Dec. 16 at 4:45 p.m. at the New York Hilton. To register for NewsTECHForum, click here.