Back to TVNewsCheck Home Print this page
DMA 82: SPRINGFIELD, IL

Joe Crain, a WICS Springfield, Ill., meterologist since 2004, disappeared from the weather report after ad-libbing June 5 about the "Code Red" moniker that station owner Sinclair Broadcast Group implemented as a severe-weather alert. Late Monday, WICS GM Rick Lipps said in a video posted to the station's website that "Code Red," which "may no longer be fitting," will be replaced with "Weather Warn."
By John O'Connor | June 11, 2019 | 6:23 a.m. ET. 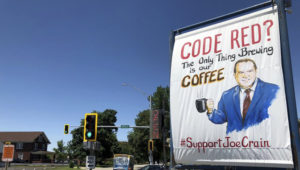 A sign supporting WICS Springfield meteorologist Joe Crain appears at Grab a Java, a drive-through coffee joint, on Monday, June 10, 2019 in Springfield, Ill. The central Illinois city is defending a popular meteorologist who has been absent from local television newscasts since he criticized a corporate weather-alert brand. (AP Photo/John O’Connor)

SPRINGFIELD, Ill. (AP) — A popular meteorologist has been absent from local television newscasts since criticizing a corporate weather-alert brand last week, prompting an advertising boycott, social media protests and a complaint from a U.S. senator.

Joe Crain, a WICS-TV staff member since 2004, disappeared from the weather report after ad-libbing June 5 about the “Code Red” moniker that station owner Sinclair Broadcast Group implemented as a severe-weather alert.

Reflecting the frustration of a community that believes the brand is overused and often unnecessarily alarms viewers who are not in harm’s way, Crain said, “It’s all-inclusive, it doesn’t recognize that not all storms are created equal.”

Late Monday, WICS general manager Rick Lipps said in a video posted to the station’s website that “Code Red,” which “may no longer be fitting,” will be replaced with “Weather Warn.” And Lipps said that managers will work to better define specific areas facing the greatest weather threat.

During a string of “Code Red” days last week, Crain went off-script during a morning forecast.

“When you hear ‘Code Red,’ you think, as they say, the feces is about to hit the fan. We understand your concerns,” Crain said. “It’s not us. This is a corporate initiative, the ‘Code Red’ alert, and behind the scenes, many of us have tried to dissuade it for the last few months, to try something that’s less controversial.”

Messages left by The Associated Press for two representatives of Maryland-based Sinclair , which owns 191 television stations in 89 markets, were not returned. Neither did Lipps return a message left for him at his office.

But in the video, Lipps said that “Code Red” was developed to “enhance the community’s preparedness for severe weather.”

“We live and work and have families and friends in this community,” he said. “We firmly believe in the need to provide an early warning alert and will continue to provide this potentially lifesaving information.”

Lipps said in the video that he couldn’t address Crain’s absence from the air because it is an “individual personnel matter.” But reaction was swift, with online petitions demanding his return and ubiquitous social media posts with hashtag-stamped protests. A journalist for a local weekly newspaper penned a song, “Joe Crain,”set to the tune of the century-old radical-labor anthem “Joe Hill.” The online video begins with a parodied warning, “It’s a ‘Code Red’ alert. A Code Red. Everybody, hide!”

Democratic U.S. Sen. Dick Durbin, a Springfield resident, said at a weekend news conference that Crain is “reliable and said something that was obvious.”

“When someone sticks his neck out the way he did, those of us who believe he’s right need to say so,” Durbin said, according to The (Springfield) State Journal-Register.

The incident is the second media dust-up in a month in this city of 115,000, part of the nation’s 82nd largest television market , 200 miles (320 kilometers) southwest of Chicago. A staff writer for the newspaper said the State Journal-Register’s executive editor, Angie Muhs, resigned May 10 in part hoping to spare more layoffsordered by its owner, New York-based GateHouse Media.

Several prominent businesses have pulled their advertising from WICS in support of Crain and to protest “Code Red.” The owner of one former advertiser, Mark Coats of Marx Fireplaces and Lighting, said the alarm needlessly keeps would-be shoppers at home.

“The ‘Code Red’ thing is a joke to start with and he called them out on it,” Coats said of Crain. “It’s unbelievable the amount of business dollars they hurt. The only ones who benefit are the grocery stores and the gas stations.”

At Grab a Java, a popular drive-thru coffee joint known for its changing banners capturing current events with coffee-themed puns and pithy catch-phrases, a painted image of Crain holding a cup of coffee looks out at passing traffic headed downtown under the legend, “Code Red? The only thing brewing is our coffee. #SupportJoeCrain”

Bill Legge, who owns Grab a Java with his wife, Viktorija, said he agrees with Crain that the National Weather Service has a more reasonable and understandable system — a color-coded weather-map gradient to distinguish varying degrees of storm threat.

“It’s fear-mongering. It gets people excited over nothing,” Legge said of “Code Red.” He added that he saw Crain’s on-air explanation and thought Crain was “extremely professional.”