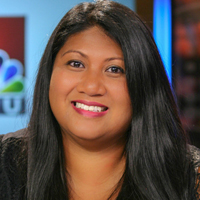 Jeimmie Nevalga, a veteran TV producer, has been named news director for KOMU Columbia, Mo. (DMA 135), effective Feb. 1. KOMU is the only network affiliated commercially operated television station (NBC) whose newsroom is used as a teaching lab. Students at the Missouri School of Journalism cover mid Missouri under the supervision of faculty.

As news director, Nevalga will oversee a complex newsroom environment that brings together a diverse group of students and professionals from around the world while collaborating with the school’s other hands-on multiplatform newsrooms. These include a digital-first community newspaper, an NPR-member station and the State Government Reporting Program in Jefferson City. The appointment makes Nevalga the first woman and minority to lead the news department at KOMU.

Nevalga also will have newsroom management responsibilities associated with the station, including budgeting, revenue, ratings and audience data.

Dean David Kurpius said Nevalga’s leadership and experience will complement the training of future multimedia news journalists. “Jeimmie is a solid leader whose work as a journalist, producer, teacher and mentor has contributed to the success of our students and award-winning newsrooms,” said Kurpius. “We look forward to her building on these accomplishments and strengthening our connections with mid Missouri.”

Nevalga joined the KOMU staff and the school’s faculty in 2011 after serving as a producer and senior producer for WGN-TV and CLTV in Chicago as well as WISN Milwaukee. In addition to serving as KOMU’s executive producer, she has taught courses in producing and reporting to journalism students and professionals at global conferences.

Nevalga has helped the station win several top Missouri Broadcasters Association awards over the years. She earned an Emmy nomination as executive producer for a special called Community Under Fire: A Search For Solutions. Nevalga’s former students are working in local news stations across the country as well as for national networks.

Nevalga earned her bachelor’s degree in journalism from MU in 2000. She is a member of the NATAS Mid-America Emmys, the National Association of Hispanic Journalists, the Society of Professional Journalists and the Asian American Journalism Association. She is fluent in Tagalog and proficient in Spanish. Nevalga is active in numerous University of Missouri and School of Journalism committees, including its Diversity and Inclusion Committee.