KHOU Houston Is Back, Better Than Ever 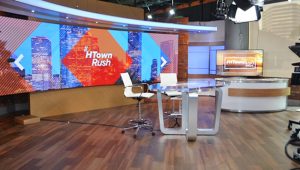 Almost 18 months after being forced to evacuate its building due to severe flooding from Hurricane Harvey, KHOU Houston has settled into a new home in the city’s bustling Galleria district.

The Tegna-owned CBS affiliate began broadcasting from 43,000 square feet of space at 5718 Westheimer, a 22-story midrise building owned by UBS, on Feb. 17.

The two-and-a-half floors include a large, flexible studio space, two control rooms, edit suites and a multiplatform live desk where journalists produce for both KHOU’s on-air newscasts and its various digital platforms.

The design is significantly different than the station’s former home on Allen Parkway that was flooded with five feet of water during Harvey from the nearby Buffalo Bayou on Aug. 26-27, 2017. (To see a video shot during the flooding, click here.)

It’s also a lot bigger than the interim facilities it had been operating from at KUHT, the noncommercial station on the University of Houston campus that took in KHOU after the evacuation. There, the entire news operation worked from a single room.

“It’s really great, everyone here is walking around on cloud nine,” says KHOU President and General Manager Robert Springer. “But part of us is also waiting for someone to tell us we have to go back.”

Tegna chose 5718 Westheimer for its new home last spring, but didn’t begin construction and integration until the fall. Picking a location that was not prone to flooding was a definite consideration as was looking for an open architecture that would let different teams “meld together,” says Robert Lydick, Tegna’s VP of IT and station operations.

While Tegna considered creating an all-IP plant based on the new SMPTE 2110 standard, it decided to go with a more traditional technical backbone for KHOU’s new home. 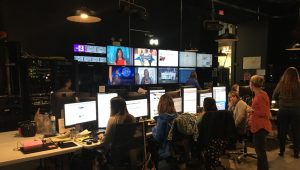 “From a plant perspective, we had a decision to make very quickly whether to go IP or not,” says Lydick. “Due to the complexities involved, we decided against going with an IP infrastructure, though a lot of the equipment has a path toward IP. We wanted to move very fast.”

The real innovation at KHOU comes in the studio and newsroom design, which was informed by the success the station enjoyed in its temporary home at Houston Public Media.

“It’s all one big hub,” says KHOU Executive News Director Sally Ramirez. “If you have three big breaking news stories, all the people who have to have the critical information are sitting next to each other, and they all get information at the same time and then out it goes to different screens…. Everyone is hearing the same message, and we all work as one content team. I think that is the future.”

This multiplatform “live desk” has access to all video and data feeds coming in and out of the station through an Exterity IPTV system, and can direct the delivery of breaking content to broadcast or digital platforms using vMix’s software-based vision mixer and switcher.

“We now have the ability to send out a press conference to air or to YouTube or Facebook, and we have the technology pretty much with one push to send it out to all screens, and multiple people know how to do that,” Ramirez says.

“It is my intent that every person knows how to operate that technology, so you can sit there and pretty much direct, produce and host.”

On the studio side, the station uses Sony studio cameras in conjunction with a Sony production switcher and Sony ELC production automation software.

KHOU will continue to operate its satellite studio located downtown at the George R. Brown Convention Center on Avenida de las Americas, which it began planning well before Harvey and which has served as a unique space for special-event coverage since launching last year.

That studio, which is slightly more than 700 square feet, was initially meant to be a reporter location but KHOU expanded it and has used it for special-event coverage.

“We get a lot of use out of that small space,” says Ramirez. “It was my vision to do shows from that space. It’s a wonderful location, in the heart of a very busy and growing section of Houston.”

The new 5718 Westheimer facility has what Ramirez describes a “giant studio” on its first level that can be divided with a retractable wall. Instead of the old configuration of a Studio A and Studio B, it’s “one large space that can be used for a number of things,” he says.

Currently, the studio space is divided into a large set for KHOU’s newscasts and a smaller portion dedicated to its talk-show style Great Day Houston, which airs at 9 a.m. each day. And Ramirez says that every inch of the studio space has been finished to be camera-ready.

“I purposely wanted a 360-degree set, knowing that it could be on camera at all times,” she says. “We wanted the cameras to be able to roam, so every inch of space could be used.”

The second-floor newsroom space includes a presentation space where KHOU can contribute to Tegna Daily Blast Live, the group’s daily 30-minute news and entertainment show that is available on-air across 36 markets and online nationally through YouTube and Facebook.

There are eight cameras located throughout the newsroom, along with a working weather center and presentation center in the middle, and live video can be easily sent to multiple locations.

“Now with this technology, anything can be seamlessly routed to the on-air switcher, we don’t have to do anything,” says Ramirez. “Between online and on-air, we can move seamlessly back and forth. We never stop serving that audience.”