A Sight To See: Cameras In Focus At NAB 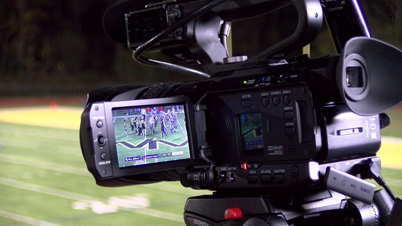 With broadcasters making plans to move to an ATSC 3.0 future that supports 4K and — more immediately — looking to leverage IP, the cloud and other technologies to improve workflows, the cameras at this year’s NAB Show will reflect the efforts of vendors to understand the evolving needs of broadcasters and address those requirements with their latest designs. Above, JVC’s GY-HM2005P. For a resources guide to the companies mentioned in this story, click here.

The television industry is in a time of transition so it should come as no surprise that the TV camera, a fundamental building block of television, is also in a state of change.

But what might be a bit surprising to some visiting the exhibition halls at the 2016 NAB Show in Las Vegas, April 18-21, is just how fast camera technology is progressing.

Whether it’s resolution, IP connectivity or workflow, the cameras at this year’s NAB Show will reflect the efforts of vendors to understand the evolving needs of broadcasters and address those requirements with their latest designs.

4K And Beyond
Today, U.S. television broadcasters live in world where 1080i HD is their highest possible aspiration when it comes to resolution. Grasping the brass ring of higher-resolution formats is still likely to be years away, even with a first-quarter 2017 completion of the ATSC 3.0 standard. But that’s not stopping them from looking.

“We are beginning to see the exploration and testing of 4K UHD cameras,” says Larry Thorpe, Canon senior fellow. “I don’t see the broadcasters racing to that by any means, but there have been experiments and testing.”

At the NAB Show, camera vendors will be offering new products for broadcasters and sports producers during this early stage of 4K.

“We’ve created a platform that through different software will be able to implement various solutions for 4K and for HDR,” says Rob Willox, Sony director of marketing.

For broadcast production departments and news applications where 4K beauty shots with shallow depth of field are required, Panasonic will showcase its new Varicam LT.

Introduced in February, the new 4K camera is a smaller, more robust version of the Varicam 35, says Panasonic Varicam Product Manager Paul McAniff. “It has a little bit less capability [than the Varicam 35], but is a 4K production camera with a Super 35mm sensor,” he says.

Grass Valley will continue to focus its efforts on providing a live production solution to meet the demands for 4K UltraHD shoots, including sports and entertainment, at the NAB Show.

The camera, which supports 1x 4K operation, 3x HD and 3G operation and 6x HD operation, relies on a three 2/3-inch CMOS imager developed by Grass Valley’s camera factory in the Netherlands, he says. Grass Valley declined to elaborate on its plans for the camera at NAB.

Ikegami and Hitachi plan to take resolution to the next level at their NAB booths with new 8K cameras.

While that level of camera performance isn’t on the roadmap for U.S. broadcasters anytime soon, 8K is scheduled to be broadcast in Japan in time for the 2020 Tokyo Olympics.

Both Ikegami and Hitachi have been working with Japan’s national broadcaster NHK on developing 8K cameras.

“NHK had our 8K cameras at the Super Bowl [in February] on their newest mobile unit [integrated by Ikegami],” says Alan Keil, company VP and director of engineering.

Ikegami will show its SHK-810 8K camera at NAB. The camera is a commercially available product, not a specialty item available only to NHK, he adds.

It also will highlight its UHK-430 4K camera with support for 40 Gig transmission to and from the camera over SMPTE fiber.

Hitachi has been working on 8K cameras with NHK for 10 years, says company VP business development John Humphrey. At the 2016 NAB Show, it will feature its latest 8K camera, the SK/UHD8060, a single Super 35 sensor camera with PL lens mount.

“As far as Hitachi is concerned, this is an established product. We are waiting for the market,” he says.

Humphrey envisions a bright future for 8K cameras. Initially, they may be used as 4K cameras are used today to enable high-res replay zooms of a controversial sports play.

But given that 8K delivers 16 times the resolution of high definition, Humphrey can imagine a day when a single 8K camera is locked down on a shot of an entire sports field and digital computer tracking is used to virtually pan and zoom around the field as play progresses, he says.

IP Connectivity
Camera connectivity reflects a subtle change in how broadcasters view cameras, says Sony’s Willox. “Increasingly cameras are becoming an accessory to the infrastructure broadcasters have,” he says.

In practice, that means an increasing reliance on the Internet for field contribution, local networks to ingest content and the cloud to share between and among stations.

“The general trend of the IT/IP industry is that all devices are connected by the Internet,” says Panasonic’s Delix Alex, product manager, PTZ camera and IP networking systems.

“I think the television industry is now in that mindset — to have a connected camera and use Internet connectivity as a mechanism for reliable video transport.”

JVC, which first built wireless IP connectivity into its cameras in 2012 with the GY-HM-650, will emphasize the ability of ENG cameras to deliver live HD streams via IP in news and production applications at the NAB Show, says Craig Yanagi, product marketing manager at the company.

JVC has incorporated adaptive bit rate technology, similar to that which is used to stream video content over the top, to maintain images even in challenging network environments, he says.

Workflow Wonders
However, more reliable IP newsgathering contribution via wireless and Wi-Fi networks is only part of the story. IP connectivity also makes possible a variety of new workflow options.

While Yanagi declined to reveal many details before the NAB Show, he says JVC will address the desire of broadcasters to “bring traditional broadcast capabilities into an IP infrastructure,” including communications between production control and talent in the field using the camera’s IP connection.

The new camera generates its own IP address, making it possible to connect another device, such as a tablet or laptop, to control camera functions, including start, stop and zoom, as well as insert special sports-related lower thirds with scores, game clocks and other game info, he says.

Panasonic will address IP camera connectivity and workflow with its P2Cast cloud-based management platform at the NAB Show.

Since its introduction at last year’s show, Panasonic has continued to enhance the wireless workflows it supports.

This year, the company will focus on how the dual encoding capabilities of its cameras enable a camera operator in the field to submit full HD proxies to the cloud while at the same time making selected full-res content available, Alex says.

That means an editor or news producer at the station can build an edit decision list in the cloud from the proxies and then request only the high-resolution frames needed for the edit. The net result is bandwidth savings and a smoother workflow.

“So streaming might not be possible due to available bandwidth, but a file-based workflow enabled by proxy is,” he says.

Of course, IP connectivity isn’t the only design element that is enabling new workflow possibilities.

For example, AJA Video will show its newly introduced Rovocam HD/UltraHD camera, which uses HDBaseT, an AV and consumer electronics connectivity standard to transport signals from the camera.

While HDBaseT relies on Cat5e or Cat6a cabling, it is not an IP-based transmission protocol. Rather, it carries uncompressed video, audio, remote camera control and power over the Category cable, says Bryce. The workflow advantage of HDBaseT is that it can move video up to 328 feet, making Rovocam especially useful for remote camera positions at sporting events, he adds.

About the size of a tennis ball, the Micro Studio relies on a 13.056mm x 7.344mm sensor and Micro Four Thirds lens for imaging. B4 broadcast lenses can be used with a special adapter and breakout cable.

“That form factor has been well received and has given people the ability to think differently about setting up multi-camera shoots in studios or putting them in places where they previously hadn’t been able to put cameras,” Caniglia says.

At the NAB Show, Blackmagic will show how the camera can be controlled remotely from its ATEM production switcher.

“With an ATEM switcher you can send a return program feed, program audio and intercom back to the camera,” he says. “And you can also send instructions to shade the camera and control lenses, which is great when the cameras are used in remote areas.”

As broadcasters make plans to transition to an ATSC 3.0 future that supports 4K and — more immediately — look to leverage IP, the cloud and other technologies to improve workflows, they can be confident camera vendors at NAB will have a variety of new products to evaluate.

Whether they hit the mark will be for the broadcasters to decide.