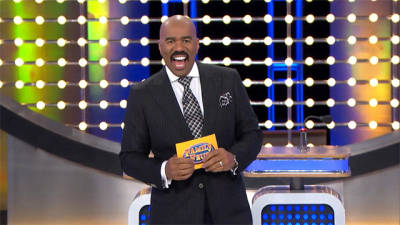 Steve Harvey will also host this Sunday's network version that will feature celebrities like Black-ish star Anthony Anderson, singer Toni Braxton and their families compete for money that they’ll donate to charity.

For the first time since game show Family Feud has soared to No. 1 in broadcast syndication with host Steve Harvey, the show is making its way this Sunday to primetime television as the six-episode ABC specials Celebrity Family Feud.

The Celebrity version tapes on a bigger set in Los Angeles with a larger studio audience than the daytime version. The format is the same, except that celebrities like Black-ish star Anthony Anderson, singer Toni Braxton and their families compete for money that they’ll donate to charity.

“It’s a bigger set and the lighting is more dramatic,” says Jennifer Mullin, co-CEO with Craig Cegielski at producer FremantleMedia North America. “Otherwise, anyone who channel surfs by it will say, ‘Oh, that’s Family Feud.’ ”

There are no plans at this point to spin off Celebrity Family Feud into its own syndicated show.

“I don’t see this as a syndicated opportunity,” says Mullin. “The charm of Family Feud is its regular families. And it would be tough to book celebrities for a strip. We do 200 episodes of Feud every year.”

The daytime version is the No. 1 syndicated game show with a 2.5 adults 25-54 rating this season through the week of June 1, compared to CBS Television Distribution’s Wheel of Fortune (2.0) and Jeopardy (1.9), based on Nielsen live-plus-same-day ratings.

“The short explanation for those ratings is Steve Harvey,” Mullin says. “He has infused the show with his own brand of humor and warmth, which is the perfect fit for the families and the format. It all works together. The show has always been wonderful, but he has made it his own.”