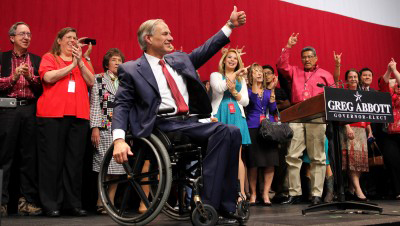 When Republican Greg Abbott took to the stage last November to claim his resounding 20-point win over Wendy Davis to become governor of Texas, he might have thanked Big Data campaigning for bringing him there.

By leveraging set-top-box data and an array of consumer marketing information, Abbott’s campaign team assembled a tightly integrated media marketing machine that hammered the appropriate message at the appropriate time to the appropriate audience with exceptional efficiency and economy, says Republican strategist Dave Carney who recruited and managed the team.

“We were getting gigantic efficiencies on TV,” Carney says. “We were able to buy 700 [Nielsen] points and get the equivalent of 1,500 to the target audience.

“We moved millions between cable and broadcast over the course of the campaign and had more available for online. Digital was always in the mix. It got a larger percentage as its effectiveness was proven.”

Some of the TV savings went into the bank where it can be used to help allies in their future campaigns, the state party or a possible reelection bid.

And some went into more digital media where, by the end, the campaign had spent $5.5 million or a whopping 18% of its media budget.

Carney came away from the campaign a media agnostic. “If you’re not a registered voter, I don’t care that you watch Monday Night Football. If you’re a voter, are persuadable and might vote for us, I want to talk to you every time you turn on any device — TV, radio, iPad.”

President Obama’s reelection team pioneered Big Data campaigning and media buying in 2012. And as researchers and media agencies have become more adept at collecting, analyzing and using the data, the cost has been coming down.

All told, Abbott’s team spent $1 million to design and test its Big Data campaign in the primary. Others looking to follow suit in 2016 should not have to start from scratch, says Chris Wilson, president, national television, Rentrak, which supplied set-top-box ratings and other data to the Abbott campaign and some 150 others this year.

“We’ve already begun to build out a new political suite of services. Our focus in the midterms was on races where there was a large amount of TV spending. [Now] one of our objectives is to provide information to all levels of races.”

HOW THEY DID IT

So, how did Carney’s team pull it off in Texas in last year?

First, WPA Opinion Research collected massive quantities of polling data on the 14 million registered voters in Texas and combined this with campaign and consumer data to build a mathematical model. That identified the campaign’s overall target audience of about 2 million people that was broken down into categories like Hispanic males. WPA constantly deepened the data, surveying tens of thousands by phone monthly and combining it with everything from donor lists to Facebook data.

“Every morning by 8 a.m. Central Time, we’d have about a 120-page printout of media market by media market that detailed voter demographics by subgroup movement,” says WPA COO Bryon Allen. “Any time we saw a trend emerge over a few days, the campaign could quickly allocate resources.”

To further refine the TV targeting, the campaign brought in Deep Root Analytics, which made heavy use of the Rentrak data.

“A friend asked why I was getting into the buggy whip business when I started doing TV analytics,” says Brent Seaborne, founding partner of Deep Root. “That’s not how it is at all. TV will be the dominant media for a long time yet. But it will take up a shrunken share of campaign budgets, [dropping] from 60%-80% to 40%-50%. The trick is making that smaller share perform as well as what you spent a few years back.”

Knowing who to hit with messaging is one thing. Actually doing it is another. Here, the campaign turned to Targeted Victory, a full-service digital advertising agency, to coordinate the online effort, and Crossroads Media, a Republican media services firm, to make the TV buys.

To facilitate the TV buying, Seaborne’s team at Deep Root provided “dashboards” communicating data with graphics to show where Abbott’s potential voters could be found on TV. For Crossroads Media, this took a bit of getting used to.

“It isn’t as simple as loading a rate card in, looking at Nielsen and doing a buy,” says Crossroads Media President Patti Heck. “We have to use our dashboards to be sure that we’re covering everything we need to cover.

“Frankly, we have a back-end report weekly and not just the election to tell us how we’re doing. How are spots delivering impressions on targets?”

But Heck quickly saw the value in the new approach. She found opportunities in more cable networks and time periods, and shifted spending at TV stations, especially in Houston and Dallas.

“I was surprised at the amount of targeting we could do. There were stations that would have done much better by the old fashioned way than with the set-top-box data. In some markets, it made a big difference in the breakdown of how the market was bought,” Heck says.

“One thing we wanted to find out is if [the number of persuadable voters] was going to be uniform across markets. It wasn’t. We shifted the weight between stations when one show would do clearly better,” she says.

But in Dallas, The Today Show indexed much higher for persuadable voters than its rivals, she says. In Houston, Good Morning America was tops, and so offered a better value.

The data did not cause the campaign to the shift money from broadcast to cable, only to spread out the money across more networks and shows.

According to Heck, some of the cable buys were predictable for a conservative candidate in a red state — like A&E’s Duck Dynasty and World Wrestling Entertainment.

But the History Channel’s Pawn Stars and Discovery’s Naked and Afraid proved to be unexpected gathering places for swing voters. Deeper buys into cable networks included Syfy and Animal Planet.

Knowing the numbers — both the number of impressions the campaign was making on its targets plus watching the opponent’s campaign’s media buys — allowed Heck to keep a cool head despite pressure to loosen the purse strings.

While TV spending is still dominant, Big Data alters the role of the online campaign. Rather than operating as a standalone, digital messaging synched with TV can create a more lasting impression on impressionable voters, says Michael Beech, co-founder of Targeted Victory, which carried out the digital efforts.

The core challenge for such a fully-integrated media effort is overcoming what he calls “fractured frequency,” how voter’s attention is increasingly scattered across multiple media.

“About 54% of the electorate is what we call screen agnostic, using all devices,” Beech says. “We matched up TV viewership history with online profiles so if you watched an hour on CBS, and our campaign ran an ad on that, we ran an online ad to that household.”

Big Data campaigns may mean more money going into digital, but TV can hold on to the bulk of it if it responds properly, says Rentrak’s Wilson.

“As each cycle goes on, more and more tools will be developed to effectively communicate between broadcasters and campaigns. [Buyers] need to know what inventory is available at what cost so they can buy in a more streamlined, electronic fashion instead of having to go back-and-forth,” he says.

“The marketplace is changing. Political clients have done well for broadcasters, and now broadcasters need to understand their viewers beyond just age and sex,” Wilson says. “They need to go in and see where there are concentrations of swing voters and price the inventory differently.”

This story originally appeared in TVNewsCheck’s Executive Outlook, a quarterly print publication devoted to the future of broadcasting. Subscribe here. Read the other stories in the Winter 2015 issue here.

That’s all very interesting, but the end result is terrible for Texas. Abbott as Governor and Patrick Lt. Governor, two people with highly questionable morals.

Scott shows a statistically high propensity for missing the point.