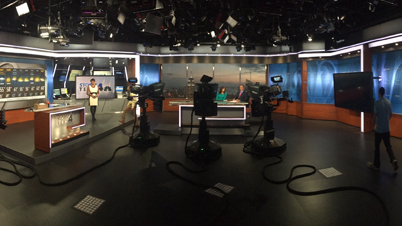 Local news sets are relying on big video displays and monitor arrays such as those at WNBC New York to tell more compelling stories. They are also making it easier for stations to repurpose those sets for other shows. This is Part One of a four-part Special Report on news studios and sets. Part Two on video display controllers also appears today. Part Three tomorrow will explore how the NBC O&Os have upgraded many of their facilities in a Q&A with the group's Therese Gamba and Jeff Morris. Part Four on Thursday takes a close-up at the innovative approach at WTXF Philadelphia and KDKA Pittsburgh.

That’s because the biggest single design element on news sets is large video displays, and the form they take — whether it’s individual large flat panel displays, monitor arrays or even LED cubes — fulfills critical functions news sets are being called upon to perform, such as enhance storytelling, enable greater set versatility and help cement the identity of a local station in the minds of viewers.

From a functional perspective during a newscast, these displays make the presentation of news much more dynamic, says Devlin Design Group creative services director Diane Fiolek (who goes by “DiFi”).

“You don’t see people sitting at an anchor desk so much anymore,” she says. “They say their hello from there [the anchor desk], and then they are off to the monitors.”

From those positions by the monitors, anchors can do live talkbacks with reporters in the field or access interactive graphics to help better tell stories, she says.

As a background behind an anchor desk, they can also help a local broadcaster establish itself as the hometown station.

“Some stations want to identify with that cityscape,” says Fiolek. “So when you see the opening of the newscast, you see that city skyline in the monitors. You get that message: ‘We live here. This is our place.’”

“Over the last number of years, using no-bezel screens and putting them together side-by-side to give you a bigger area of video has been a main influence on how that technology is used,” he says.

However, doing so hasn’t been without its challenges. A few years back, monitor vendors recommended designers plan for less than the thickness of a business card between monitors, says FX Design’s McLaughlin.

“We have now found out that we have to do a double business card thickness between them because over time the monitors in the studio expand and contract between the heat and cold, which was starting to fracture the edges,” he says.

“So now, even though the bezels have gotten thinner, the gap between them [the monitors] has gotten bigger just to keep them from damaging each other,” McLaughlin says.

Ultimately, the answer to big video on set may be large LED display cubes, similar to the type used in sports arenas.

“In the not-too-distant future as the price of LED comes down and the quality goes up [they will be used],” McLaughlin says.

WNBC went live from a new set on Oct. 10 in a 4,000 square-foot studio at 30 Rock in Manhattan.  The set, designed by Jack Morton PDG, includes an LED wall as part of its weather center.

While Jeff Morris, SVP of operations and technology for NBCUniversal Owned Television Stations, expressed pleasure with the appearance of the LED display, he says the technology remains expensive. However, an expected drop in price could mean LED cubes will “someday” be considered for other NBCU O&O news sets.

Major advancements in video pickup, specifically 4K, appear to be following a similar trajectory as LED displays: limited today, but poised for a future breakout.

At the moment, broadcasters can’t transmit 4K over the air. However, some stations are finding ways to leverage it on their news sets. For instance, KDKA, the CBS O&O in Pittsburgh, uses 4K video to fill 90-inch HD displays mounted side-by-side in portrait mode (vertically) to emulate the appearance of large windows overlooking downtown.

“One of the most important things we wanted in doing this is to make sure the quality on the screens was really good, and that nothing was being blown up because in many instances our reporters and anchors are standing right in front of those monitors,” says station on-air promotions manager Greg Loscar. Video shot in 4K for the vertical background monitors is down-resed to HD, he adds.

Big video displays, such as these, have the added benefit of making sets more flexible to handle a wider variety of shows, says Devlin’s Fiolek. (The company won the 2015 PromaxBDA Gold Award for the design of the KDKA set.)

“You can make a set feel totally different by changing the color of the background and using different graphics and video in the displays,” she says.

“I like to incorporate tracking and moving screens that can be repositioned to break up a large area into smaller pieces,” he says.

KTLM, the NBCU-owned Telemundo station in McAllen, Texas, is an example of how Casey included the ability to move monitors to make sets multifunctional.  In June, the station went on air with a new news set that includes three different monitor arrays — one of which relies on rails to make it easier to reposition the displays.

Extending the monitors expands the set’s background, which is particularly helpful during production of a local entertainment show that shares the news set. When a large group of singers or dancers is booked for the show, these monitors make it easy to extend the background behind the performers, says KTLM’s Jose Flores, president-GM.

Perhaps the easiest and highest quality way to add big video to a news set is through the use of computer-generated virtual sets. Not only are the video and graphics displayed in the virtual monitors crisper, but the fact that the set is computer-generated means it has the highest degree of flexibility of all available options, says FX Design’s McLaughlin, whose company has been evangelizing for the technology for the past few years.

However, virtual sets and hybrid sets that combine virtual and hard set elements have been slow to catch on, he says. “I just don’t know what the big stopper is there,” McLaughlin says.

“We’ve launched one [hybrid set] at WBTV (Charlotte, N.C.,) one at KFVS (Cape Girardeau, Mo.,) and another at WBUE (New Orleans), and they are loving it for what it is giving them, which is flexibility at a really inexpensive price point. [They use the virtual element of the hybrid sets] primarily for standup reporter positions and stories that have a heavy graphic need,” he adds.

McLaughlin speculates there may be more at play when it comes to acceptance of virtual and hybrid sets than on-air appearance and flexibility, however. Virtual sets mean there is nothing other than a green screen area and cameras to show station visitors and potential advertisers who are taking tours.

Without something tangible like a desk, monitor walls and presentation pods, it may be harder to convey to station guests the concrete presence of a local broadcaster in the community, he says, adding that this speculation is based on a few conversations with broadcasters but no empirical data.

For the moment, however, big video on news sets takes the form of large monitors, arrays of monitors and other displays, and the functions big video fulfill remain central to what stations and their sets are being asked to achieve.

This is Part One of a four-part Special Report on news sets. You will be able to read the other parts here.

One issue stations haven’t grasped is too much motion in background video is distracting from what is being presented.

Ridiculous. The Stations understand framing and images better than you.

Third graders understand the difference in proper and non-proper nouns, as well as which ones should be capitalized That said, I find the large video walls a bit distracting myself. Best newscast I’ve seen lately was one is Savannah, Georgia at one of the smaller stations where the set was modern, but not overly techno-flashy. No video walls, live shots of reporters on some random street corner or whizzing helicopters, but very, very well shot field video and concise reporting. Good job WJCL!! And now back to @Insider for more insults…

Yes, but your actions show you find HD Broadcasts and Color movies distracting.

Apparently you’re too slow to understand that you can’t do HD on an analog channel – and that’s what the cable company here has available to lease… use your brain before you type.

Actually the first HD System was Analog in the 80s, but I digress. I am certain I understand technical issues far more than you. Again, that you are a part time analog lease speaks volumes. You do part time cable operations after your paper route, lol.

Apparently not, you keep suggesting that I should do HD on an analog channel and that speaks volumes. Simply isn’t possible a 6 Mhz. analog EIA channel.

By the way, perhaps you should insult all the Atlanta broadcast networks, since they’re all on the same system in plain old analog…

There you go lying again. Atlanta Broadcast Stations (HINT THERE ARE NO ATLANTA BROADCAST NETWORKS) are on channel 800-820 in HD. How can you tell if RidgelineTV is lying? He’s on the internet typing! https://www.windstream.com/Digital-TV/Hiawassee-and-Blairsville-Channel-Lineup/

Funny, they seem to all be on in analog here just like I am. WSB TV, the oldest TV station in the South, is adjacent to me on analog channel 2… no lies here. The point was that the cable company IS THE ONE who is putting those stations, including mine, on analog. Yes, the Atlanta network affiliates ARE also on in HD, because the FCC REQUIRES them to be. One the other hand, my station does not have that LUXORY of that rule and can not force the cable company to put my station on in HD or digital (I have actually tried to get them to put a digital version on so I could go 24 hours a day).