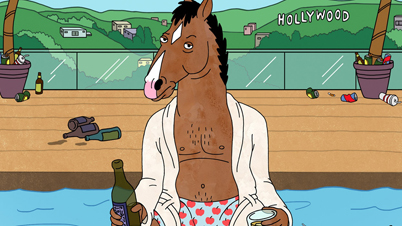 The fourth season of BoJack Horseman launched worldwide on Netflix to rave reviews. New York magazine said: “The show’s fourth season is not just its best, it’s the finest single season of a comedy in ages,” while Rotten Tomatoes said that the show continues to “fearlessly traverse the emotional gamut — with results that are heartbreaking as often as they are hilarious.”

Will Arnett leads the offbeat show, the first animated adult comedy series to appear on the streaming service, about the most beloved sitcom horse of the 1990s, 20 years later. BoJack Horseman was the star of the hit TV show Horsin’ Around but today he’s washed up, living in a Hollywood bachelor pad, and complaining about everything. Set in a Los Angeles in which humans and anthropomorphic animal-people co-exist, BoJack Horseman is about one man (well, horse-man) who peaked too early and must figure out what to do next.

Michael Eisner, owner of Tornante, said: “I’m very proud of BoJack Horseman. Who knew a washed-up sitcom star, who happens to be a horse, would drive the best reviews of any television show or movie in which I have been involved in my career?” Eisner added: “This business is all about who you work with creatively. Thank goodness Raphael Bob-Waksberg walked through my door.”

“In an era when addictive, laugh-out-loud comedies are in short supply, BoJack Horseman delivers what cable networks have been missing,” Mort Marcus and Ira Bernstein, co-presidents of Lionsgate-owned Debmar-Mercury, said. “Not only do we love the show but we think this horse-man can finally buck the trend in comedy, providing a strong alternative to conventional sitcoms.”

Roll a fat one and enjoy Millennials !!!

Oh boy. Love this show but the concept is WAY over the heads of most basic cable TV viewers. Very dark, very introspective. Not something the “Say Yes to the Dress” or “Real Housewives” crowd would typically gravitate toward.