Back to TVNewsCheck Home Print this page
TVN TECH | NAB 2017 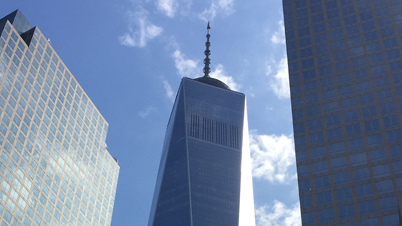 TV broadcasters have a lot on their minds this year at the NAB Show in Las Vegas. New efficiencies enabled by IP video transport as well as IT technology and next-gen TV made possible by ATSC 3.0 are near top of mind. But no issue facing over-the-air TV broadcasters at this year’s gathering tops the FCC-mandated repack of the television spectrum. Above: Few transmitter sites will require dealing with logistical issues as complicated as those that had to be overcome at One World Trade Center in New York. (Photo: ©2016 John M. Lyons. Used with permission.)

With the FCC firing the starting gun on the TV spectrum repack two weeks ago, broadcasters and vendors alike at the NAB Show in Las Vegas appear to have come out of the starting blocks strong on their 39-month dash to relocate 987 U.S. stations and hundreds more in Canada and Mexico to new channel assignments.

“The repack notice being out [April 13] has obviously turned the activity level to what it was five years ago,” said Bill Harland, VP of marketing at Electronics Research Inc. (ERI) “We captured as many leads by Tuesday morning as we had the whole show for the last four years.”

Rich Redmond, chief product office of GatesAir, echoed Harland’s observation. “Most of the broadcasters are in a let’s-get-going mode,” he said.

Even before the FCC released its new table of allotments on April 13 — during the time when broadcasters received their confidential letters from the commission informing them of their new channel assignments — Dielectric began getting calls from hundreds of broadcasters eager to get rolling, said Jay Martin, company VP of sales.

That number has only grown. “We are working with over 700 stations at this point on their final [antenna] solution,” he said.

However, despite the initial, healthy pace of this 39-month marathon, questions and concerns remain.

“I think the real issues are around time and money, but those are symptoms of resources,” said NAB EVP-CTO Sam Matheny. Moving nearly 1,000 U.S. broadcasters to new channels is “unprecedented,” and the ripple effect of a delay at one station on many others could be profound, he said.

“Just the whole idea that if it is a windy day, you can’t do work — not if it is snowing, not if it is raining — if it’s windy,” he said. “It could be blue skies, sunshine and windy and you cannot do work [at elevation on a tower removing an old antenna or installing a new one]. When those realities set in, folks are going to see that the idea of getting this done in 39 months is just not possible.”

The $1.75 billion reimbursement fund to pay the expenses of broadcasters changing channel assignments is a problem, too, said Matheny. “I think $3 billion might be more realistic,” he said.

Ajit Pai, newly confirmed FCC chairman, relieved some of the concerns broadcasters have had about the consequences of missing their repack deadline during his April 25 remarks at the NAB Show.

“It’s critical to ensure the transition’s ultimate success, including a smooth and efficient repacking process,” said Pai. “Part of that involves making sure that no protected television broadcaster is forced to go dark due to circumstances outside of its control.”

Several Broadcast Engineering and Information Technology Conference sessions at the show were aimed at helping broadcast engineers grapple with the complex, multifaceted issues they will face at their transmitter sites.

For example, Martyn Horspool, product manager, TV transmission, at GatesAir, walked broadcasters through what they must do at the site to be ready during his April 26 “Pre-Spectrum Repack RF Plant Readiness” presentation.

At the top of his list was doing a thorough building inspection to identify what must be replaced and what can be reused followed closely by “making a really good map or drawing of the building.”

Determining HVAC requirements, a careful inspection of the electrical plant and analyzing the tower to ensure it is up to the ANSI/TIA-222-G standard were also on his list of preparations.

“We really think the lion’s share of folks’ sites will just need some careful planning,” said GatesAir’s Redmond in an interview after the presentation. “There shouldn’t be any real show stoppers.”

However, the “Building an Advanced Customizable RF Transmission System at One World Trade Center” presentation on the same day illustrated just how difficult some sites may be.

For instance, RFS antennas shipped horizontally to save on freight costs from Australia, had to be unpacked at Myat Inc. in Mahwah, N.J., which served as the project’s systems integrator, and then repacked in vertical containers to make it possible for them to fit in the building’s freight elevators.

Many other logistical obstacles, such as security, the size of the trucks used to haul components to the site and timing of deliveries had to be managed, says John Lyons, assistant VP and director of broadcast communications for The Durst Organization, which co-owns the building with the Port Authority of New York and New Jersey.

Lyons was honored later the same day by the NAB with its 2017 Television Engineering Achievement Award.

One strategy to keep broadcasters on air while towers are being cleared of old antennas, transmission line and other components is to deploy a temporary broadband antenna, which can be side- or top-mounted and used by multiple stations in a market.

Bach, a broadcast applications engineer at Kathrein USA, explained how a temporary broadband antenna, covering both current and post-repack channels, can be used to park a station while tower crews and other resources are assembled for installation of a permanent antenna.

All major antenna manufacturers were showing their broadband UHF temporary antennas on the exhibit floor.

Running on a parallel track to the TV spectrum repack is the ATSC 3.0 next-generation TV standard, which broadcasters are taking into consideration as they prepare to change out their RF infrastructure for the repack.

(Editor’s note: Phil Kurz will examine ATSC 3.0 developments at the NAB Show in a separate TVNewsCheck article on Friday, April 28.)

On the exhibition floor, several vendors also are showing antennas that can be easily changed to vary polarization — something that may prove useful when transitioning from ATSC 1 operation to 3.0 if mobile service delivery is a priority.

“We have had a tremendous amount of interest in some of our futurization technology for UHF, which will permit stations to operate with varying levels of polarization, all from the same antenna without modifications to the antenna system down inside the building,” said Alex Perchevitch, president of Jampro.

Major transmitter vendors on the exhibit floor, including GatesAir, Rohde & Schwarz and Hitachi Kokusai Electric Comark, are showing UHF transmitters that can be easily modified to add greater output power when 3.0 becomes a reality and a vertical polarization component is enabled.

Broadcasters, however, must remember the restrictions on reimbursement expenses from the relocation fund, said Joe Turbolski of Hitachi-Comark.

“ATSC 3.0 is a double-edged sword, because everybody who is involved in the repack is getting reimbursed from the FCC for like to like. So, any equipment they buy is essentially 1.0 equipment,” he said. On the plus side, it’s also all upgradeable to ATSC 3.0, he added.

Besides, the top priority for repacked broadcasters at the moment is transitioning to their new channel assignments with ATSC 1 service on schedule.

Some stations are so eager to get started they aren’t willing to wait for their new transmitters, said Graziano Casale, national account manager at Rohde & Schwarz.

“We have some customers interested in having transmitters delivered on their old channel that can later be retuned for the repack when the time comes,” he said.

“Having a broadband amplifier over the whole UHF band up to [ch.] 51 was definitely something of interest,” Casale said.

One goal of Radio Frequency Systems (RFS) is bringing an element of scheduling certainty to the repack process when it comes to antennas, said Scott Martin, RFS director of broadcast sales.

The company announced at the NAB Show a program to guarantee date-certain antenna delivery and installation. RFS is partnering with tower rigger and installer ITI, which will provide the on-site labor for the job, Martin said.

Channel sharing is also part of the repack for some broadcasters, and because putting two competitors in the same 6 MHz assignment is new in the United States, there are some completely new issues that must be addressed.

One is guaranteeing each broadcaster gets its agreed-to number of bits over time, said Jean Macher, director broadcast market development Americas at Harmonic.

“When it comes to channel-sharing agreements, you need a way to make that fair and guarantee the broadcasters sharing the channel get the correct amount of bandwidth,” he said.

Harmonic has developed a new way of doing statistical multiplexing where it is possible to define a guaranteed average bit rate in the long term while keeping the advantage of stat mux efficiency, he said.

Another tricky new issue is what to do about PSIP (program and system information protocol), said Ralph Bachofen, VP of sales and marketing at Triveni Digital.

At the NAB Show, the company released GuideBuilder 5 to address channel sharing.

“You can now have a single transport stream with multiple major channel numbers, which you will need to do eventually for channel sharing,” said Bachofen. “That is the funky part about the repack. The moment you channel share, you’ve got to start thinking about PSIP.”