CNN Expects The Unexpected With Debates 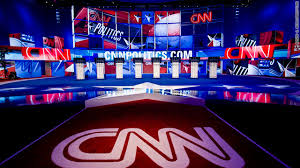 The news network is presenting two debates next week with the help of local TV stations and it’s been preparing for about a year. Now it’s a matter of daily editorial meetings, blocking, stage management and rehearsals as the clock ticks down.

CNN is hoping for big ratings and perhaps another historic election moment next week when it airs two, live political debates: on Tuesday, the Florida gubernatorial debate between Charlie Crist and Gov. Rick Scott; on Thursday, the New Hampshire senate debate between incumbent Jeanne Shaheen and Scott Brown.

“There is a hunger for politics,” says Mark Preston, politics editor at CNN. “There’s a renewed interest in figuring out what’s going on in Washington and what the candidates are saying. What better way is there to do that than have the candidates hash it out on stage?”

The news network has had some historic debates, like in 2004 when Anderson Cooper hosted a presidential debate with Rock the Vote for young voters. In 2008, viewers asked questions via YouTube.

And, in 2012, CNN’s Candy Crawley memorably moderated a PBS debate that arguably changed the course of the presidential election. She interrupted Mitt Romney to defend President Barack Obama, backing up his claim that he had described the 2012 Benghazi consulate attack as an “act of terror.”

Romney, until that moment, had seemed to be on his way to snatching a second term away from President Obama.

Those moments are unplanned, but live TV debates are anything but unplanned.

CNN spends about a year preparing for debates — starting with getting commitments from candidates to prepping the candidates and writing the moderators’ questions right up to debate day.

“Right now, we’re having editorial meetings every day,” Preston says, about next week’s debates. “There will be rehearsals, including the day before and probably the day of the debates. We’ve already sent teams of directors and supervising producers to go through the blocking and stage management — literally, like walking the candidates up to the stage.”

The candidates themselves typically show up a day before the debate.

“They are given opportunities to visit the station to walk on the set, to get a feel for where they’ll be standing and which camera they’ll be speaking to,” Preston says.

This year’s debates focus on two closely followed races. In Florida, Crist is the former Republican governor of the state who’s trying to win back the governorship as a Democrat.

And, in New Hampshire, former Massachusetts senator Brown is hoping to win a seat that could give Republicans a Senate majority.

“We can’t show every debate, but what we can do is give viewers a taste of what’s at stake and the characters driving the agenda,” says Preston.

“Those questions started rolling in [yesterday], but throughout the broadcast we’ll be updating those questions,” Preston says. “I can tell you, having been in the back of production trucks going through Twitter and Facebook, questions are subbed out on the fly.”

Some of CNN’s biggest challenges in these debates — as with all political debates — will be to coax debaters back to questions if they veer off track. And, behind the scenes, CNN will ensure that neither candidate hogs the conversation.

“If their answer takes more than a minute and it’s substantive, we’ll give them more time,” Preston says. “If we don’t think there’s a rebuttal, we might not give them a rebuttal. That’s up to the moderator’s discretion. But we will have someone inside the control room with a stopwatch keeping track of time. Those numbers will constantly be given to the executive producer who’s in the ear of the moderator.”

CNN? Do they even do news anymore???