Back to TVNewsCheck Home Print this page
MULTICASTING 2016: PART 2 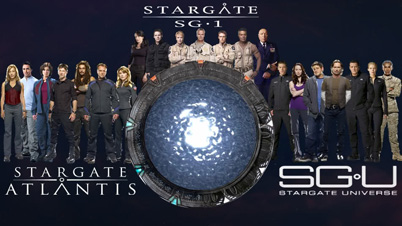 MGM and its partner, Sinclair Broadcast Group, looked to the stars for the inspiration for its latest multicast network, Comet. Central to the channel's sci-fi programming is the Stargate franchise comprising three live-action series, one animated series and three Stargate movies. Comet's execs are pleased that the diginet is "skewing younger than most of these other [classic TV] channels."

The multicast network known as Comet evolved from two key considerations: What programming niche has yet to be filled in the diginet space? And can the content be found to fill it?

For MGM and its partner, Sinclair Broadcast Group, the answers, respectively, were “science fiction” and “yes.”

As a result, Comet came to life last Halloween, anchored by science-fiction programming owned by MGM — both TV shows and movies.

Comet’s creators certainly didn’t foresee the channel’s other distinction: At the moment, it is the last diginet to come on the market.

“The diginet marketplace was maturing and we said, ‘OK, what’s next? And actually niche programming was the next step that you look at,” says John Bryan, president of Domestic Television Distribution for MGM Studios. “And we have 1,500 hours of sci-fi programming.”

Not yet a year old, Comet is seen in 92 markets covering 72% of U.S. TV households. Not surprising, Sinclair stations account for most of the coverage, but stations owned by Tribune, Hubbard, Sunbeam and others are also on board.

Comet is offered on a barter basis with Comet keeping nine minutes and the affiliate taking five each hour. “At this time we are not paying cash, but are open to rev shares if the station wants us to sell the local time,” said an MGM spokesperson.

Bryan says viewership has grown steadily since last January, but he declined to share the ratings with TVNewsCheck. So far, like many other diginets, it relies wholly on direct-response commercials.

At least two of the Stargate series are now on Comet, whose programming stretches from the 1950s to the present (almost). Bryan noted that MGM is planning on producing at least three more Stargate movies in 2017 and 2018.

One of Comet’s shows is Men into Space, a black-and-white Ziv Television series (distributed by MGM) about astronauts that ran for only 38 episodes in 1959 and 1960. It’s the kind of rare property — one not seen in years, if not decades — that Bryan and the Comet management team were pleasantly surprised to find really resonated with the audience they’re trying to reach.

“It’s skewing younger than most of these other channels,” Bryan said of Comet, comparing its younger audience to the older demos that he says watch the old TV shows on multicast networks such as Weigel’s MeTV, Tribune’s Antenna TV and others.

“What we’ve done is, we’ve taken kind of a culty approach to this,” Bryan said. “My team that’s run by Simon Graty, who runs all my channels, are creative geniuses. They have a lot of fun with this stuff.”

Among the recent events the Comet team has packaged for the network: A July Fourth marathon of science-fiction movies grouped under the title Invasion: Alien Attack Movie Marathon. It was promoted on Comet’s website with copy that read: “With dark forces of alien armies amassing, we’re celebrating our independence while it lasts.”

Other shows on Comet include two versions of The Outer Limits — the one from the 1960s and the follow-up series from the 1990s — and a host of campy movies. Recent titles include 1982’s She, which was described on the website as “A warrior queen and her sidekick quest for Nork Mountain with two drifters, Tom and Dick.”

Among the obscure titles that have made a splash on Comet, according to Bryan: The Twonky, a rare and largely forgotten black-and-white movie from 1953 about a television set that morphs into an evil robot that threatens its owner in his own home.

Bryan said Comet has made a series of recent acquisitions, including the old Mystery Science Theater 3000 series, which will join the Comet lineup in September. The network has also secured the rights to the Godzilla series of Japanese monster movies, Bryan said.

For local stations, multicast networks represent a rare thing — an opportunity to grow their businesses, says Bryan. “This is the first time on a local level that TV stations have been able to add inventory that they can go out and monetize.”

This is Part 2 of a four-part special report on multicasting. Parts 1 and 3 also appear today. Part 4, running Thursday morning, will focus on the technology of compression and channel sharing. You can read the other stories here.