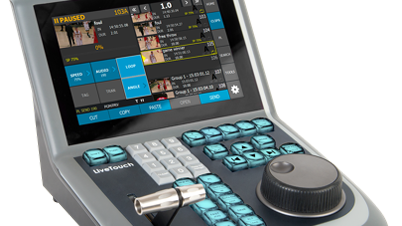 It says that in the wake of the SAM merger it is “taking the best of the best” from both companies, folding some products from one company into the other's and letting other products expire after the natural life cycle, with a focus on three areas: live production, news and content delivery.

LAS VEGAS — After its parent Belden acquired U.K.-based editing, playout and switcher provider Snell Advanced Media (SAM) back in February and merged it into Grass Valley, Grass Valley used its press event at NAB to focus more on how the company is integrating existing SAM products into its broader portfoilo and maintaining customer support than on highlighting new products.

The acquisition of SAM for an undisclosed amount from U.K. private-equity firm LDC is the latest in a wave of deals from Belden, which does a robust business in providing cable to the telecommunications and industrial sectors and has spent more than $3 billion in acquisitions since 2005, when CEO John Stroup came aboard. The company previously acquired Telecast Fiber in 2009, Miranda in 2012 and Grass Valley in 2014, as well as a bevy of businesses in non-media sectors.

“What Belden realized is that our cable connects up to a lot of devices, and we can provide a lot more solutions,” said Glenn Pennycook, president of the enterprise solutions platform for Belden, in explaining the strategy.

At NAB, Grass Valley is showing early integrations between the GV and SAM product lines, as GV is “taking the best of the best” from both companies, said Pennycook. He said that SAM is a good cultural fit for Grass Valley and that the deal also expands GV’s geographic reach, given its foothold in Europe, and adds ever-important scale.

Grass Valley is one of the companies that Pennycook is overseeing after a reorganization of Belden into two divisions, enterprise and industrial. Tim Shoulders, a longtime Belden executive, is president of Grass Valley.

Belden sees growth potential in Grass Valley and thinks it should be a “25% EBITDA business,” said Pennycook. It’s not today, and for now Belden doesn’t see any other companies in the media space that are attractive candidates for acquisition.

“There are very few companies in the broadcast space who are making any EBITDA,” said Pennycook. “That points to weakness in the segment, and excess capacity in the marketplace. There’s excess in R&D, and excess in sales and marketing, and it’s all just waste. There’s a tremendous amount of fragmentation in the marketplace and a tremendous amount of waste.”

On that note, Grass Valley is folding some products from one company into the other’s and letting other products expire after the natural life cycle, with a focus on three areas: live production, news and content delivery.

As SAM didn’t make cameras, the live production segment was easy to integrate, said Shoulders. GV has added SAM’s Maverick switcher to the middle of its switcher line, and SAM’s popular Kula switcher on the low end, which can be run by GV’s Ignite production automation software.

In the replay space, the company is going to maintain SAM’s LiveTouch replay system and “port the best features” from Grass Valley’s Dyno replay product into LiveTouch, he said, with Dyno eventually being discontinued.

In content delivery, GV will continue to manufacture its iTX playout system as well as SAM’s ICE channel-in-a-box product, which Shoulders called the “number one and number two solutions for integrated playout.” Both work with SAM’s Morpheus automation software, whose interface will be rebranded as “GV UX” as part of a combined playout system called GV Playout.

“We think iTX users will benefit from the Morpheus UX interface,” said Shoulders.

At NAB, Grass Valley is also introducing a cloud-based playout system, iTX Flex, which will provide microservices and be sold as a software-as-a-service (SaaS) product. iTX Flex uses a software playout engine with control and monitoring via an HTML5 browser-based user interface, and enables users to rapidly launch channels via a cloud, on-premise or hybrid configuration.

As the last piece of integration, SAM’s IO line of modular products will be rolled into GV’s Densite line.

For existing GV and SAM customer it will be “business as usual” in the near term, said Neil Maycock, VP of global marketing for Grass Valley. He said GV is using NAB to reassure customers about the merger and the benefits of the combined portfolios in future product development. He emphasized that no product from either company will be immediately discontinued and that support will be maintained.

“We’re not going to cut anybody off,” said Maycock. “It you invested in a product, we’re going to support it.”

An interesting byproduct of the timing of the SAM acquisition is that SAM was already committed to a 6,000-square-foot booth in the South Hall of the Las Vegas Convention Center, close to the Grass Valley booth. Instead of splitting its product demonstrations, GV has repurposed the former SAM booth space for meeting rooms and also created an ad-hoc press room for reporters covering the show with free coffee and Wi-Fi, saving them the long trip to the North Hall press room when looking for a work space.

“That’s probably going to be a one-off,” Maycock told reporters Sunday night. “I don’t think we’re going to have a second booth going forward — unless we acquire somebody else.”