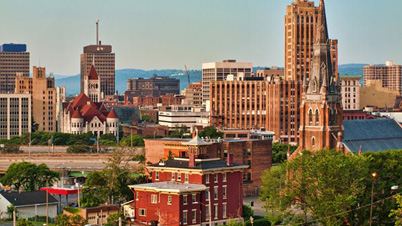 Advance’s Post-Standard overwhelmingly beats its local television peers in social media performance in Syracuse, N.Y. according to Shareablee data. Its social media lead says a careful video strategy, helped by some viral hits, has lifted it.

Syracuse, N.Y., is that rare market where a newspaper bests all of its local television competition on social media, at least according to data from audience insight firm Shareablee.

The Post-Standard crushed its next-closest competitor in this regard, which was Sinclair-owned WSTM-WTVH-WSTQ, with almost 692,000 total actions.

The paper also edged out those stations in total fans/followers with almost 197,000 to their just over 195,000. It took the lead on Facebook, Twitter and Instagram, the latter on which it notched an impressive near-67,000 actions (the runner up had just 3,500).

Syracuse.com’s Christine Loman, the social media lead, knows that on video-centric Facebook, squaring off against TV competitors isn’t easy. The paper does have a video staff, however, and “we try to be very smart about the videos we choose to produce,” she says.

Staffers also had extensive Facebook Live training at the beginning of the year, and the paper is ramping up its output there. Still, it errs on the side of less live video than more to avoid a sense of overkill with users. “Not every fire that [reporters] go out to would make a good Facebook Live,” Loman says. “We try to keep things at a fairly high level.”

But like everywhere else, a few viral hits have been a boon to the paper, such as this video of a pickup truck crashing into a city bus or this one of a local man bowling 12 strikes in 86 seconds.

The paper is an aggressive participant in Instant Articles, Facebook’s native platform for content, where Loman estimates about 75% of its content goes and engagement gets another boost.

And it’s big on the frequent posting of pictures, especially where sports-crazy Syracuse University fans are concerned. “We do a ton of shareable images,” Loman says.

Live sports are also an emphasis on the paper’s Snapchat channel, where Shareablee doesn’t measure performance here but where Syracuse.com is gearing up for a busier summer season of live events that also include the New York State Fair and outdoor concerts.

It’s still a relatively nascent platform effort for the paper, but Loman says it’s where it hopes to build relationships with its next generation of users.