Back to TVNewsCheck Home Print this page
TVNEWSCHECK FOCUS ON PROGRAMMING 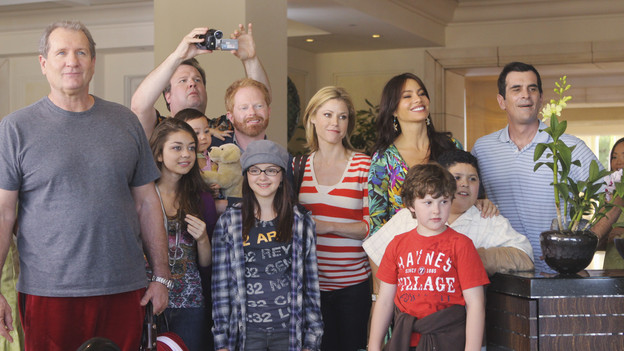 Beginning July 1, ABC, CBS, Fox and NBC, plus the top five cable networks will begin providing audio descriptions of some of their programming for blind or sight-impaired viewers. The shows to be described range from ABC's Modern Family to CBS's NCIS to Nickelodeon's Dora the Explorer to USA's Royal Pains. For now, stations in the top 25 markets and cable systems with 50,000 or more subs will be required to offer about four hours a week of the new service. The number of stations and hours will gradually increase.

Starting July 1, the country’s 21.5 million visually impaired people will be able to enjoy TV more than ever before.

On that day, the Big Four broadcast networks and the top five-rated cable networks will begin offering four hours a week of so-called video descriptions that clue in blind and partially sighted viewers on what’s going on when the characters aren’t talking. The descriptions, audible only to viewers who want them to be audible, are squeezed in between the dialog.

Video descriptions have been part of broadcasting, cable, home video, but never to the extent on TV as they will be beginning next month.

It’s not altruism driving the surge in descriptions. They were mandated by Congress in the 21st Century Communications and Video Accessibility Act of 2010.

According to the FCC’s implementing rules, the Big Four O&Os and affiliates in the top 25 markets will have to air 50 hours each quarter — or roughly four hours a week — of described programming.

Cable and satellite systems with at least 50,000 subscribers have to offer the same amount of described programming for the top five-rated cable networks — currently Disney, Nickelodeon, TBS, TNT and USA.

And with just weeks to go before the deadline, the described programming plans of nine affected networks are shaping up.

ABC’s plan is to provide descriptions on some of its Tuesday and Wednesday shows. This summer, those shows  include sitcoms Last Man Standing, The Middle, Suburgatory, Modern Family, Happy Endings and Don’t Trust the B—- in Apt. 23.

In the fall, ABC will likely include most of those shows and new sitcom The Neighbors and new drama Nashville.

CBS has been providing audio descriptions for several programs since 2002. The lineup is CSI, Criminal Minds, NCIS, NCIS: Los Angeles, plus movies and miniseries.

NBC has broadcast a slew of shows with descriptions, including the Betty White reality show Off Their Rockers, drama Grimm and the summer series Saving Hope. Described sitcoms include The Office, Up All Night and Parks and Recreation.

At Fox, The Simpsons has been audio described for several years.  Beyond the animated sitcom, Fox isn’t prepared to say what it would be offering.

Nickelodeon will offer descriptions for some of its biggest hits, like the long-running animated Dora the Explorer and preschool educational show Team Umizoomi.

Turner Broadcasting will have described movies as well as TV series. Among the series: TNT’s The Closer and TBS’s Tyler Perry comedies House of Payne and For Better or Worse.

USA’s described programs will include off-network shows NCIS and Law & Order: SVU, plus originals like Royal Pains and Suits.

“My hope is that more and more networks will embrace these accessibility initiatives,” says Joel Snyder, president of Audio Description Associates. He serves as director of the American Council of the Blind’s audio description project and is an adviser to the FCC.

“If they do it right, they’ll find ways to make money from it. If they make their shows accessible to these folks, there is a bigger market for advertisers to sell their products.”

For the most part, video-described programs won’t include live shows or news. The networks, which are providing most of this content to their affiliates, need time to write description scripts for voice artists to record.

“It takes longer to get that done than closed captioning,” says one network executive. “It also requires us to look at how our post-production schedules are set up. We have to work very closely with the folks at the post-production houses to make sure we get the programming to our vendors with sufficient time to get the video description correct.”

The networks and some associations for the blind are helping to ensure that people with vision problems know that descriptions are coming.

“It’s great for the networks to comply, but what’s more important is getting the information out to folks,” says Helena Berger, EVP-COO of the American Association of People with Disabilities. She is also a member of Comcast-NBCUniversal’s joint diversity council.

“What we can do on our end at AAPD is to use our communication channels, like our newsletter, our website and social media to get the word out to the community.”

Some of the networks are creating logos and audio tones so that people with vision problems know when a program has audio descriptions. So far, there isn’t an industry standard.

And TV listing providers like Tribune Media Services will provide data to programming services to let them know if a program is audio-described. Then, it’s up to individual cable systems to add symbols or sounds to their on-screen listings.

These described programs are the culmination of a 12-year battle by the FCC and groups such as the Audio Description Institute. They thought they had won the battle in 2000 when the FCC adopted rules similar to the 2010 act, but a court agreed with broadcasters that the agency had overstepped its authority.

Now backed by law, the new FCC rules gradually expand the description obligations to other TV stations. By July 1, 2015, major network affiliates in the top 60 markets will have to broadcast the descriptions. The FCC may require additional stations to air descriptions at a rate of 10 markets a year if it deems the cost is reasonable.

According to broadcasters, it costs stations anywhere from $10,000 and $25,000 to install the gear necessary to handle the extra audio channel.

“Just because someone has a disability doesn’t mean they don’t want to be included in life,” says Debra Ruh, chief marketing officer at SSB Bart Group, a firm that helps companies make their computer services and websites fully compliant and accessible to people with disabilities. “Part of participating in life is being able to experience television. TV is a very important part of our culture.”