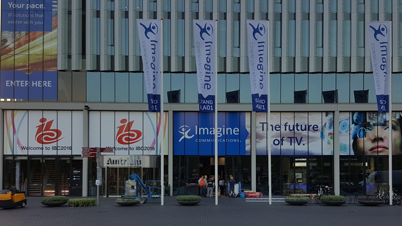 During the IBC 2016 opening keynote today in Amsterdam, the chairman of Vivendi Content and chief commercial officer of Vodafone Germany discussed how they are tackling changes in the distribution and consumption of video content.

Studio Plus will debut on Oct. 11 in Latin America, roll out a few weeks later in Europe and ultimately reach 600 million people in 20 countries in six languages by mid-2017, he said.

“Premium, short entertainment content is a big opportunity to create value on mobile networks,” said Delport. To capitalize on that opportunity, Vivendi is producing 10 new Studio Plus series. Each episode lasts only 10 minutes, and Vivendi has committed to spending 1 million euros on each series, he said.

When other costs are taken into account, the media giant will spend 35 million euros on the project this year alone, said Delport.

Delport was one of two speakers at the opening session, “Mad Men, Mobile and Media: How Today’s Changing Media Landscape Is Affecting Advertising, Distribution and Content Strategies in TV and Beyond.” Sharing the stage was Manuel Cubero, CCO of Vodafone, Germany. He talked about the company’s transformation since its acquisition of German cable TV provider Kabel Deutschland in 2013.

Delport said Vivendi had high hopes for Studio Plus. “We think there is a way for people to be entertained for 10 minutes of their day — when they commute, when they queue, when they waste their time and when they don’t want to jump into that Game of Thrones 50-minute series.”

Currently, there is no premium video content produced expressly to be consumed on mobile devices, and Delport is counting on the Studio Plus shows to fill that void, he said.

The user experience, which hinges on the episodes being short, and dual IP components —intellectual property in the form of premium content and Internet Protocol for distribution — are key elements Delport hopes make Studio Plus a success, he said.

Several telcos are courting Vivendi for its Studio Plus premium content because they know it lines up with the content “snacking” their mobile customers seek, he said.

Studio Plus also positions Vivendi to capitalize on the swelling ranks of mobile phone users worldwide.

“[There are] 2.5 billion people connected with mobile, and very soon the 2 billion humans who are off the grid will be connected to mobile. We know that,” he said.

Vodafone’s Cubero said Vodadone and Kabel Deutschland turned out to be “a perfect combination” of technical infrastructures.

“[It’s] important to note that at the time Vodafone Germany was shrinking,” he said. “The revenue growth was negative, minus 6.2% per year, and Kabel Deutschland was nicely growing with plus 5%.”

The synergies between the two companies “were huge,” among other things producing significant cost savings allowing the combined enterprise to take steps such as consolidating two national fiber networks into one and making joint IT procurements, he explained.

The combination of the two companies also has contributed to increased revenue, he said.

“We cross sell the mobile products to the fixed customer base in Germany,” said Cubero, adding that the company also cross sells its fixed products to its mobile customers.

As a result, combined total revenue has grown 1.5 billion euros, he added.

As a result of the acquisition, Vodafone was able to turn around its revenue declines and for the last two quarters record year-over-year quarterly service revenue growth, he said.

“Basically, [it’s been] a successful turnaround for Vodafone Germany, proving that the idea of creating these new entities works and makes us much stronger. One plus one doesn’t equal two —maybe three,” Cubero said.

Following the acquisition of Kabel Deutschland, Vodafone has become a “fully convergent player” offering a complete quadruple play, he said. Post-acquisition, Vodafone is positioning itself as the “Gigabit company,” which means offering the fastest connectivity everywhere, including at home, work and on the go, he added.

Cubero also announced the company would launch in the second half of 2016 the new Vodafone TV service in Germany, which will include linear, live and different types of nonlinear content, such as catch-up TV and SVOD (subscription video on demand), over all networks and over the top.

The service rollout will allow Vodafone customers to watch TV “in a seamless way” regardless of whether a television or digital device is being used, he said.

Vodafone also has developed with Cisco an all-new IP distribution platform that will be part of the new service offering, Cubero said.

To see all of TVNewsCheck’s IBC 2016 coverage, click here.