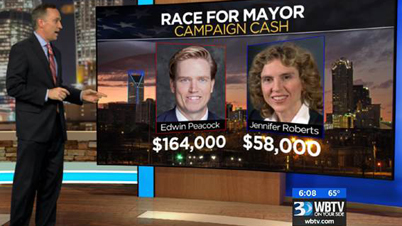 In next year’s elections, there’s likely to be a noticeable uptick in the use of high-tech tools by stations like WBTV Charlotte, N.C. (above), to help viewers better understand the shifting political fortunes of candidates and parties and add a little on-screen pizzazz in the process.

Last month, television viewers in Canada had an easier time grasping how political power was shifting during the federal elections thanks to special data-driven graphics that the Canadian Broadcasting Corp. used in its live coverage

The graphics combined augmented reality (AR) with a 3D model of the Canadian parliament. “In our parliamentary system, the main thing is how many seats a party has, and sure enough on Oct, 19 we were delivered with a pretty incredible story of change,” says Michael Gruzuk, the CBC’s executive producer of news specials.

“So being able to just look at that augmented seat-change graphic and see how many more seats the Liberals would have and how many the NDP were losing, told viewers what was happening in a very simple to understand way.”

Networks like CBC have been in the forefront of virtual and augmented reality for elections, but it’s now within the reach of TV stations. “It’s the natural progression in storytelling,” Gruzuk says.

Set design firms and tech companies say there’s likely to be a noticeable uptick in the use of the high-tech tools next year — a big presidential election year — to inform viewers and add a little on-screen pizzazz.

Vizrt, which supplied its Viz Engine and Viz Virtual Studio for the CBC, is but one source of the technology. Powerful systems are also available from Hybrid TV, Orad (now a part of Avid), Ross Video and others.

Some stations and station groups will have a running start. “Our hybrid set [combination virtual and actual set] gave us an opportunity [in 2014] to make an election center that looked dramatically different than anything we had in studio otherwise,” says Dennis Milligan, news/content director at WBTV, Raycom Media’s CBS affiliate in Charlotte, N.C.

Literally days before the off-year election, WBTV took delivery of its new set from FX Design Group. “We launched it on Election Night 2014. We barely knew where the buttons and switches were.”

Now, with a year of experience under its belt and another left to go, the station plans to incorporate augmented reality elements for Election Night 2016.

“We can do a lot of things, such as pulling graphs out of the floor, which we haven’t done yet, but we intend to do next year during election season,” Milligan says.

Interest in these technologies is growing among local broadcasters, says Mack McLaughlin, CEO-creative director of FX Design Group, which supplied WBTV and other Raycom stations with hybrid sets and virtual technology.

“I did a seminar presentation last week to about 40 people on virtual sets and big video [multiscreen video walls that have gained popularity on news sets],” he says. “When I asked them if they were there to hear about big video or virtual sets, 80% said they wanted to hear about virtual.”

Dan Devlin, owner and chief creative strategist of Devlin Design Group, also testifies to the heightened interest in the technology. “I think we have seen [adoption of] virtual the strongest in special events like an election. One of the big selling points of virtual is the ability to change the environment from set to set, event to event,” he adds.

Devlin favors hybrid sets over purely virtual setups that can leave talent sitting in “a big green box” when there’s a technology failure. He says many of his latest designs have included additional chromakey areas, which, when coupled with the proper virtual look, can extend the hard set for ordinary newscasts and provide flexibility for special events like elections.

Broadcast consultant Larry Rickel, president-CEO of The Broadcast Image Group, says Election Night 2016 is the type of event that may propel stations to adopt virtual and augmented reality.

“I wouldn’t say it is mainstream, but I do think stations are trying different things, and that is one of them,” he says. “That’s because it looks cool, and it can potentially create a clearer and easier-to-understand story.”

Making stories — especially those that depend heavily on graphics — clearer to viewers is the driver behind Gray Television’s adoption of hybrid sets at several of its stations, says Jason Effinger, Gray’s SVP of media and technology. That will be doubly true for election coverage.

“Helping our viewers understand the state legislature makeup and who controls what part of that legislature is much easier when there is a visual to explain it,” Effinger says. “Augmented reality can make simple a very complex subject in a very quick visual manner.”

Gray Television began deploying hybrid sets at some stations in late 2014, he says. Since the initial launch, there’s been a growing comfort level at the stations where they have been introduced, including at KKTV Colorado Springs where the station has added augmented reality with graphics that “come right out of the desk,” he says.

Whether it’s a traditional hard set, a hybrid set or a “be-all, end-all trackless system with three or four cameras that are fully robotic,” the initial cost will be about the same — between $250,000 and $300,000, he says.

The savings come when broadcasters create a whole new look for election night or other event without having to construct new sets or buy new furniture, McLaughlin says.

However, an obstacle many local broadcasters will face is a shortage of the needed creative personnel, cautions Devlin.

In the case of the CBC Canadian parliamentary election coverage, for example, not only did the broadcaster rely on technology vendor Vizrt but also real-time broadcast graphics house Astucemedia and camera tracking specialist StypeGRIP.

“You have to have architectural 3D modelers who can create believable 3D environments,” says Devlin. “Graphics folks who do 3D models for animations don’t always make the transition to that.”

Another serious impediment is newsroom automation, which has ushered in an era of extremely lean production staffs, he says.

“Automation is moving stations in one direction and virtual production wants to move them back in the other direction. There is a conflict there,” Devlin says.

Despite the possible pitfalls, virtual technology and augmented reality appear poised to enhance Election Night 2016 at some stations.

“Ours isn’t the super-duper fancy one,” says Milligan of WBTV, “but it’s capable of doing a lot. Not only can we do a lot with the virtual set itself, but we can pop in new graphics.”

Wish there was a better photograph. This looks like someone standing in front of a 90″ monitor.

augmented reality? sounds like the republican platform for the past decade plus