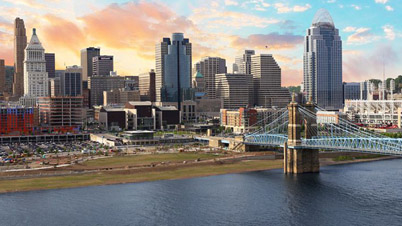 Scripps’ Cincinnati ABC affiliate leads a tight social media race among its local competitors according to Shareablee data. Its edge comes from lots of native video, its website’s editor-in-chief says, including experiments in live music and weather-inspired stunts.

E.W. Scripps-owned WCPO leads the Cincinnati market (DMA 36) in a close race among local media on social according to data from audience insight firm Shareablee.

WKRC, Sinclair’s CBS affiliate, is breathing down WCPO’s neck with almost 2.8 million actions in the same period, and it’s worth mentioning that Raycom’s WXIX (Fox) and Hearst’s WLWT (NBC) are also in close pursuit of the market’s big brass ring.

WCPO leads both Facebook and Twitter in the market, while WKRC tops Instagram. WKRC also trounces WCPO in total fans/followers, where the former has almost 607,000 to the latter’s almost 451,000.

Mike Canan, WCPO.com’s editor-in-chief, thinks it points to something important that his station comes up on top despite lagging behind WKRC in followers. He says much of that lead is down to WCPO’s heavy use of native video, both recorded and live, on Facebook, along with moving its social media workflow under its web desk for more streamlined execution.

WCPO’s Facebook video is heavy with breaking news, audience engagement efforts and no small amount of experimentation, and CrowdTangle is a frequently used newsroom tool to help see what’s working.

The station’s experiments are wide-ranging. Recently, for example, it looked to introduce new anchor Kristyn Hartman by having her confess her love of fried chicken. To do so, Hartman did a live stream from The Eagle, a beloved local joint, where she sat down with the owner and sampled a variety of menu offerings for about 15 minutes.

Another popular weekly segment is WCPO Lounge Acts, where bands touring the city come in for a four-to-six-song set with hosts Austin Fast and Gil Kaufman, who also interview the bands. Canan says the hosts’ well-informed rapport and the introduction to new talent has driven strong engagement, and the shows are also made into podcasts for the station.

WCPO has used that same digital studio for weekly live-streamed sports shows covering both the Bengals and the Reds.

Sometimes more outlandish stunts really spike engagement. In trying to find a fresh way to cover an oppressive heat wave, the station decided how long it would take for a refrigerated roll of cinnamon buns to explode in a hot car (answer: the phone recording it overheats a lot faster, so some mystery remains).

Its reach — over 2 million — promoted some follow up “Will It Freeze?” streamed this past winter, not to mention a separate segment in which the unexploded cinnamon bun can was smashed with a hammer for some closure.

It’s not only video that’s working for WCPO on Facebook. “We’ve found that editorial cartoons are absolutely perfect for social media,” Canan says.

Staff cartoonist Kevin Necessary’s work, such as a comic paying tribute to Prince, has reached up to 12 million, and WCPO runs a weekly caption contest for his latest work.

That contest even has a local music venue sponsoring it with a pair of tickets going to each week’s winner.

Inspired by The Boston Globe, WCPO has also just begun using Facebook’s Messenger app to send breaking news alerts, signaling its Facebook experimentation is pushing even further. With its competitors chasing closely behind, it can’t afford to stand still.