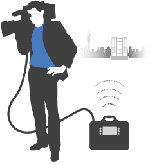 The Chicago ABC O&O has just made a large investment in bonded cellular technology that lets crews send live video back to the station over public wireless broadband networks. The gear comes from Dejero Labs. Portable transmitters the size of small suitcases send signals using an online system manager to in-station receivers, which capture the incoming video and convert it to genlocked SDI video ready for ingest into the station's workflow.

As an ABC O&O in the nation’s third largest TV market, WLS Chicago is not lacking for microwave and satellite trucks to provide live feeds for its newscasts. In fact, it has 10 of them.

But sometimes even that is not enough, says WLS Director of Engineering Kal Hassan, who says the station will put as many as 16 ENG crews on the street at one time. And sometimes, he says, microwave and satellite just can’t do that job.

That’s why WLS has just made a large investment in bonded cellular technology that will allow crews to send live video back to the station over public wireless broadband networks.

The investment was made with Dejero Labs of Waterloo, Ont., which is supplying nine portable transmitters the size of a small suitcase (19x14x8 inches and 22 pounds without batteries) along with access to an online system manager and in-station receivers, which capture the incoming video and convert it to genlocked SDI video ready for ingest into the station’s workflow.

To go live, the crew plugs a camera to the suitcase and pushes a button.

“The crews want to get the story back as quickly as possible and this becomes a nice little tool — another tool in the toolbox to help bring the story back to the station,” says Hassan.

WLS took delivery of the Dejero gear just a few weeks ago, but prior to its buy it tested the system for two months, Hassan says. “We were quite pleased with its performance. They’ve been very proactive about taking input from us and making enhancements to the system. Originally they were designed for SD, now they do SD/HD.”

Hassan wouldn’t say how large the WLS investment was, but Douglas Grant, a representative of Dejero, says that the complete Dejero Live Platform package — suitcase transmitter, the online management and receiver — lists for $35,000.

That’s not cheap, Grant concedes. “But if you’re comparing it to satellite or microwave trucks, it’s much less expensive…. For first response, it’s something to be looked a seriously.”

As its name suggests, bonded cellular technology works by strapping together several wireless air cards so that the transmitter can search out and aggregate the necessary bandwidth from among multiple 4G and 3G carriers.

According to Hassan, it takes at least 1.5 megabits per second of bandwidth to get a “decent” SD live shot and 2-3 megabits for an HD picture.

Several companies are offering products, but Dejero claims to have found a better way of juggling the bandwidth and carriers to improve reliability and picture quality. In addition to the cell network, the system also has Wi-Fi and Ethernet links.

Dejero also offers what may be a unique service. It acts as a bandwidth middleman, negotiating rates with the carriers so clients like WLS don’t have to. The client simply pays a flat monthly fee to Dejero.

But because the system using the public cellular networks, there is no guarantee that bandwidth will available when it’s needed.

“In fact, any time there is a large crowd situation like Soldier Field or the United Center, this is not the unit to use,” Hassans says. “You’re just not going to get the bandwidth that you will get at 10 o’clock in the morning someplace that’s not crowded.”

But whatever bandwidth there is seems to be available on a first come, first served basis. Once a crew is up and running with, say, 2 megabits, the signal is not going to degrade if demand on the network suddenly spikes, Hassan says. “It doesn’t change in the middle of the live shot.”

Mitigating the bandwidth problem is the system’s store-and-forward capability, Hassan says. When the cell network is loaded, video clips can be stored in the suitcase transmitter and sent back in non-real-time at low data rates

Latency, the lag between when the video is shot and when it’s been processed and ready for broadcast, is another problem, Hassan says.

Hassan says the latency is generally a few seconds. Dejero’s Grants says it’s function of how the operator sets the transmitter — he or she has the option of one, two or eight seconds — and the cellular conditions at the location of the transmitter. “It can range anywhere from one second to eight seconds,” he says.

Hassan expects the latency to disappear as the technology evolves. “This is the Model T,” he says. “In a few years, you won’t recognize the performance that these guys can deliver.”

The trucks still deliver the best, most reliable pictures and sound and they are better in crowds, but they, too, have their limitations.

For one thing, without a good deal of set up, they cannot be used indoors. The Dejero system can, just like a cell phone.

Last month,  when two trains collided in Chicago’s Union Station, WLS was able to broadcast live from within the station using the Dejero suitcase, Hassan says. WLS was also able to get live shots out of the courthouse during the trial of former Gov. Rod Blagojevich, he says.

The Dejero can also be used for mobile shoots, Hassan says, although the performance is far from the perfect. “It’s kind of like a cell phone, he says. “If you’re in mobile and suddenly two of your cell towers drop off, you’re going to have a problem.”

A big factor in Hassan’s choosing Dejero over several of its rivals is his belief that it is safer to use. Others systems put the air cards into a backpack where they expose the carrier to all sorts of microwave energy, non-ionizing radiation, which some believe can cause tumors.

“The air cards are at the top of the backpack, right at your neck level, right? Nobody seems to think that six cell phones wrapped around your head is a bad idea.”

Nobody but Hassan. So, to play it safe, he opted for Dejero’s transmitter-in-a-suitcase configuration.

Dejero, which started just a couple of years ago, developed the product with the help of CTV, Canada’s top-rated broadcast network. CTV first used the technology to follow the Olympic torch relay across Canada prior to the 2010 Winter Games in Vancouver.

According to Grant, Dejero is just now beginning to aggressively market the system. The sale to WLS got the effort off to a great start. Other U.S. broadcasters, which he declined to identify, are currently testing the system.

Hassan stresses that the Dejero and bonded cellular technology is not a panacea for ENG, only a complement to microwave and satellite. “We are learning the system as we go along,” Hassan says. “I caution people not to have too high an expectation and you won’t be disappointed.”